Sometimes when traveling I try something so good that I just know, despite my efforts, I won’t be able to recreate at home. The perfectly balanced sweet yet tart cherry pastries in Budapest, the unbelievably fresh ceviche in El Salvador, the heavenly baked empanadas in Buenos Aires… the list goes on and on.

Why can’t I recreate these dishes in my humble kitchen?

First and foremost… the ingredients! In Seville it’s very difficult to find ingredients outside of the typical Mediterranean staples. Olive oil may be abundant, but try finding peanut oil for an African stew, or sesame oil for a Chinese stir-fry! Don’t get me wrong, there are places to buy foreign ingredients, but they are few and far between and usually come at a steep price.

Right now, however, I’m on vacation in the US and I shouldn’t have this ingredient problem. Massachusetts is full of specialty stores, gourmet markets, food snobbery in general… even my local grocery store has three aisles of “international foods.” But it just isn’t the same.

Eating is a unique experience. Despite following a recipe step by step you will never cook the same dish twice. Ingredients change—some tomatoes are sweeter than others, some peppers are spicier, and some eggs are fresher. Just because I can buy a curry powder at my local Asian market doesn’t mean that it in any way resembles a curry by the same name that has been freshly ground with locally grown spices. It just isn’t, and can’t ever be, the same thing.

But that doesn’t mean you shouldn’t try!

People have been recreating, adapting, and fusing their favorite dishes for all of history. You have to experiment a little, expect that it won’t be an exact copy, and have fun! Use local produce instead of imported if possible. Not only is this better for the environment and local economy, it also ensures a fresher and more delicious end result.

With all of this in mind I set out to “reinvent” a dish I had tried at an Italian restaurant in Seville. Ironically, the dish itself was already a fusion of Spanish and Italian when I tasted it, and in my own (or should I say my Mom’s) American kitchen it changed even more.

It was a lasagna, or lasaña as the Spanish spell it, cheesy and creamy and… full of fish. Dried and salted cod to be more specific. It wasn’t what I grew up eating but it was incredibly delicious. Cod, or bacalao, is very popular in Spain and Portugal. It is usually prepared in dishes like croquetas de bacalao (creamy fried cod croquettes), revuelto de bacalao (scrambled eggs with shredded cod and vegetables) and bacalao al pil-pil (cod sautéed in garlic, olive oil, and hot chili pepper). And while it used to be inexpensive and a poor man’s food, it is now increasingly expensive and valued in new Spanish and Portuguese cuisine.

After seeing some in the supermarket I decided to try to make something similar to what I’d tasted in Seville. It certainly wasn’t an exact replica, but it was delicious and my family enjoyed it, and that’s what matters most.

Your fish should be salted and dried and a good quality. Make sure it is actually cod you are buying and not a cheaper fish that they misleadingly label as “Bacalao.” It’ll need to soak for at least 24 hours before you can use it and you must change the water at least 4 times. I soaked mine for 2 days and changed water twice a day.

The first thing you have to do is make the béchamel sauce. I used an easy recipe by Mario Batali. Gather your ingredients:

1. While warming the milk in a small saucepan melt the butter in another over a medium heat. 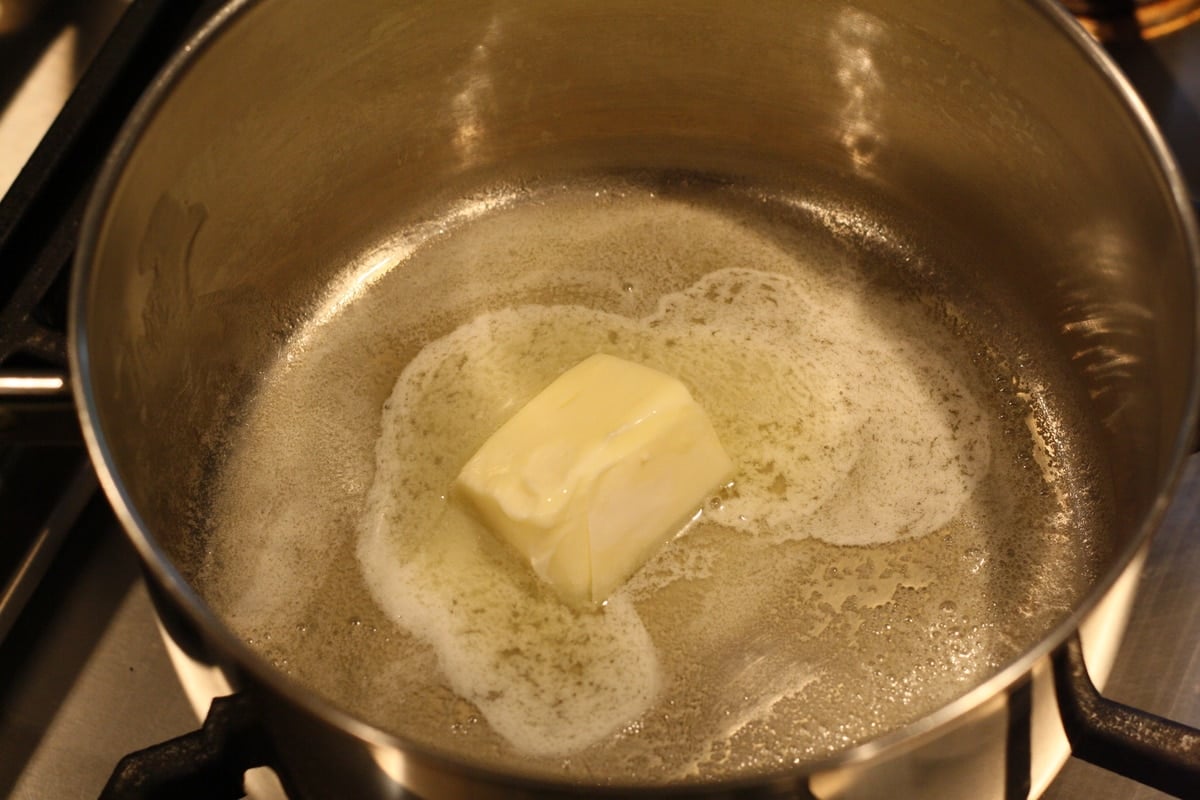 2. When fully melted add the flour and stir continuously until it changes to a sandy brown color (about 6 minutes). 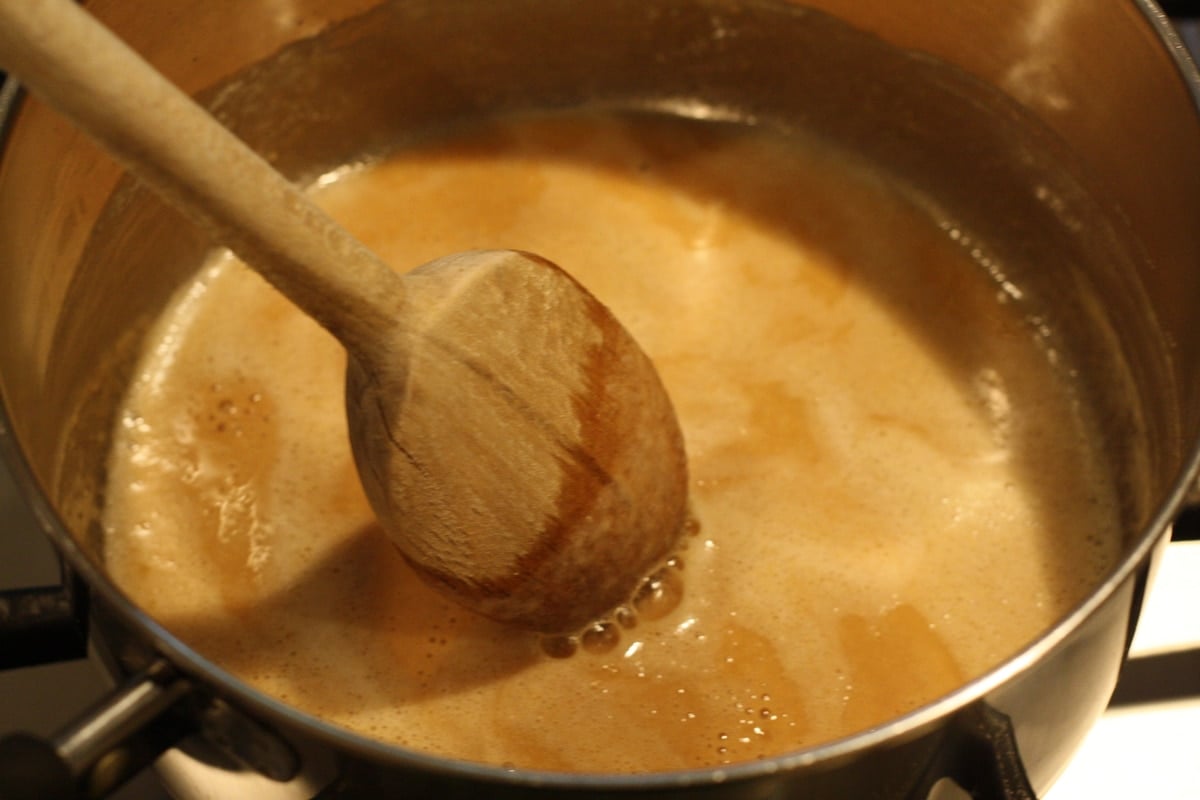 3. Then, slowly whisk in the milk until completely incorporated. 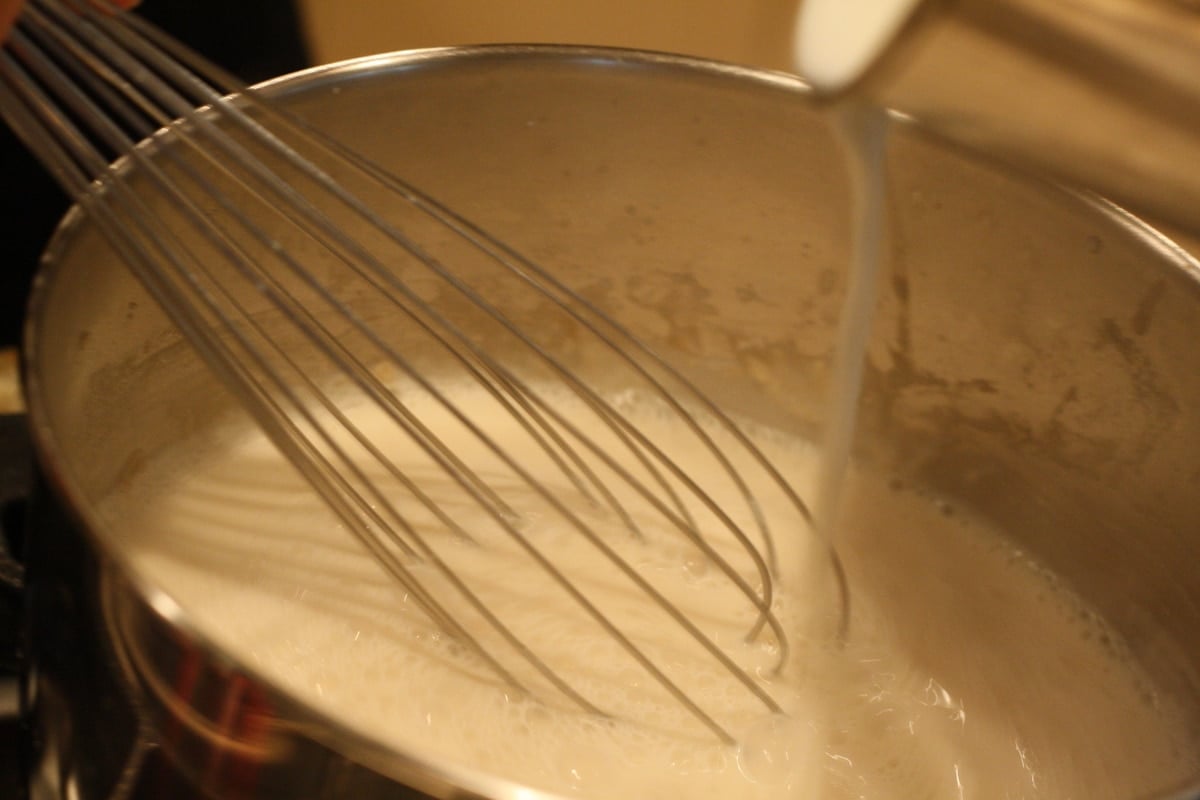 4. Cook over the medium heat for 10 minutes while continuously stirring. After 10 minutes it should have reduced some.

5. Turn off the heat and stir in the salt and nutmeg. Allow to cool and use when needed.

6. Now, you can cook your lasagna sheets. I used the Barilla brand and I cooked them 8 minutes so that they remained al dente and wouldn’t get mushy in the oven. Bring a big pot of salted water to a boil, add the sheets and make sure they are covered by the water, boil for 8 minutes, strain and rinse with cool water. Lay the noodles flat until you need them later. 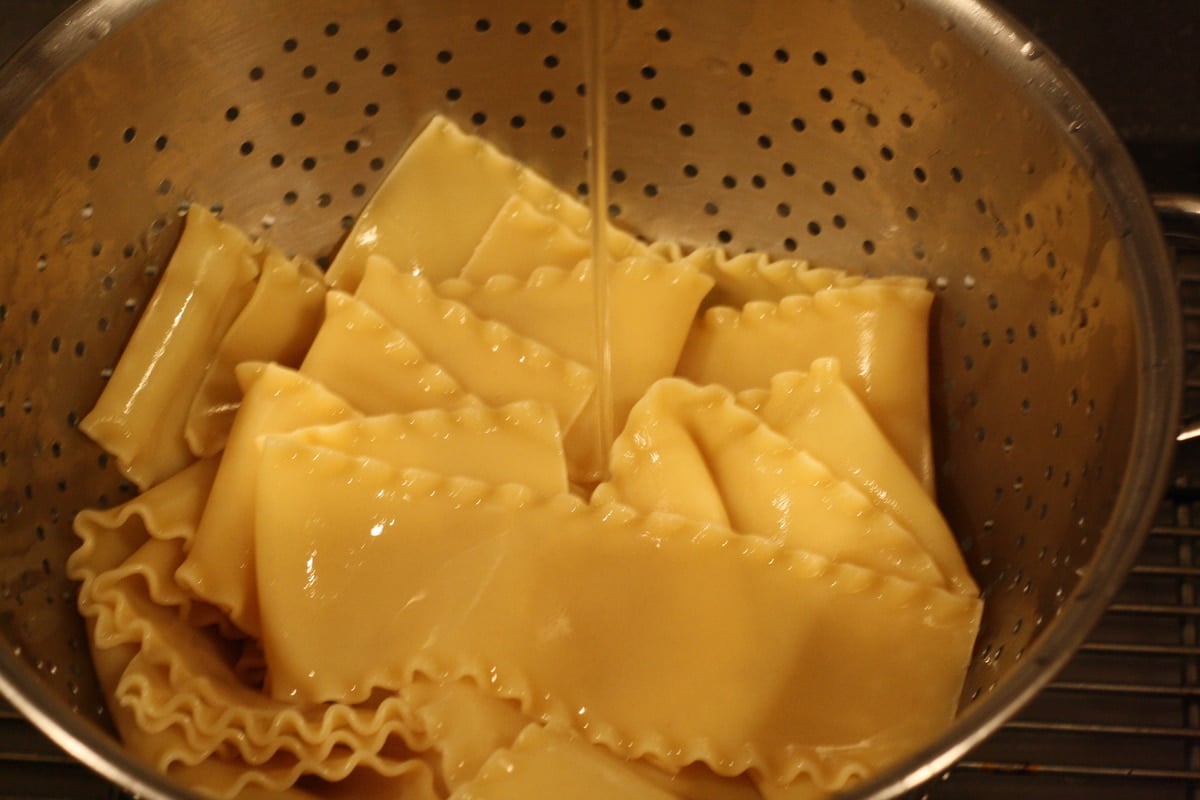 7. Drain the cod for the last time and put it into a pan covered in cold water. Put the heat on medium and poach the fish until it flakes easily (about 10 minutes.) Drain again and put aside.

8. While your fish is poaching cut your vegetable julienne style (small matchsticks). I used onion, red pepper, and zucchini. Saute them until al dente in some extra virgin olive oil. When a little soft, add 2/3 can of petite diced tomatoes and 2/3 can of tomato paste. Mix well and cook for about 5 more minutes. 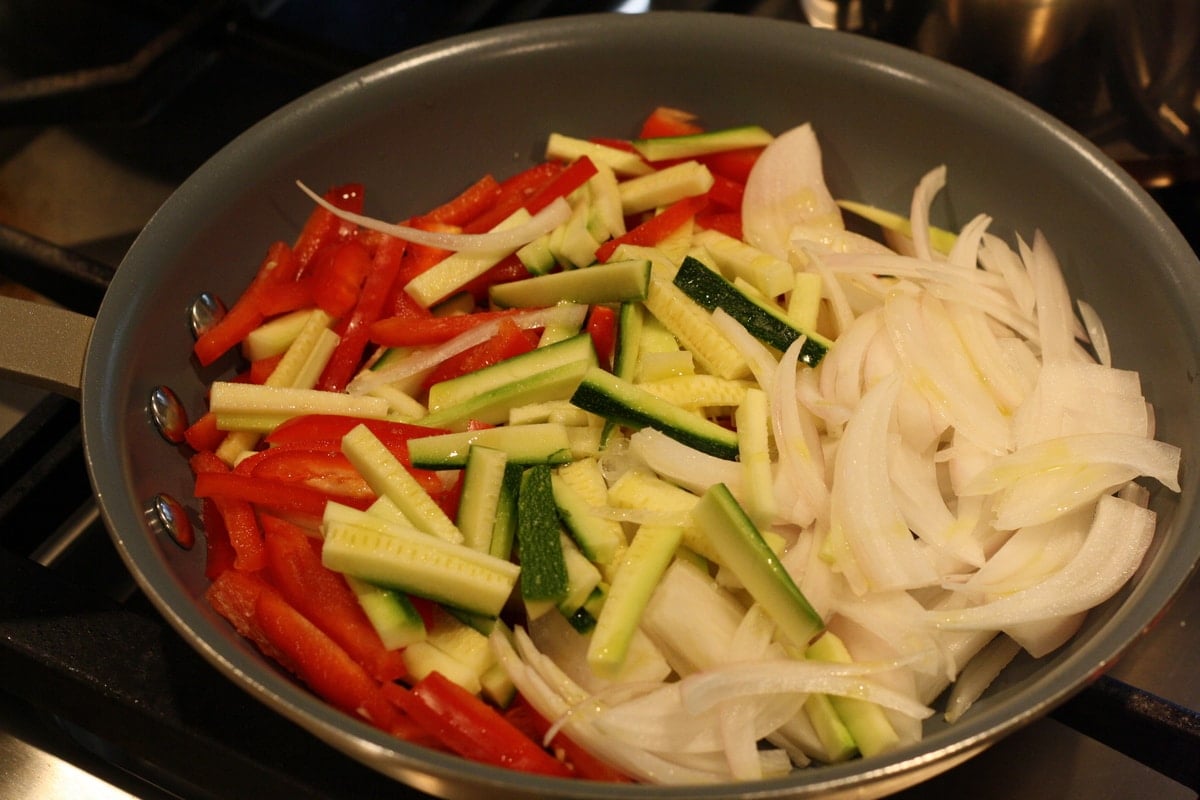 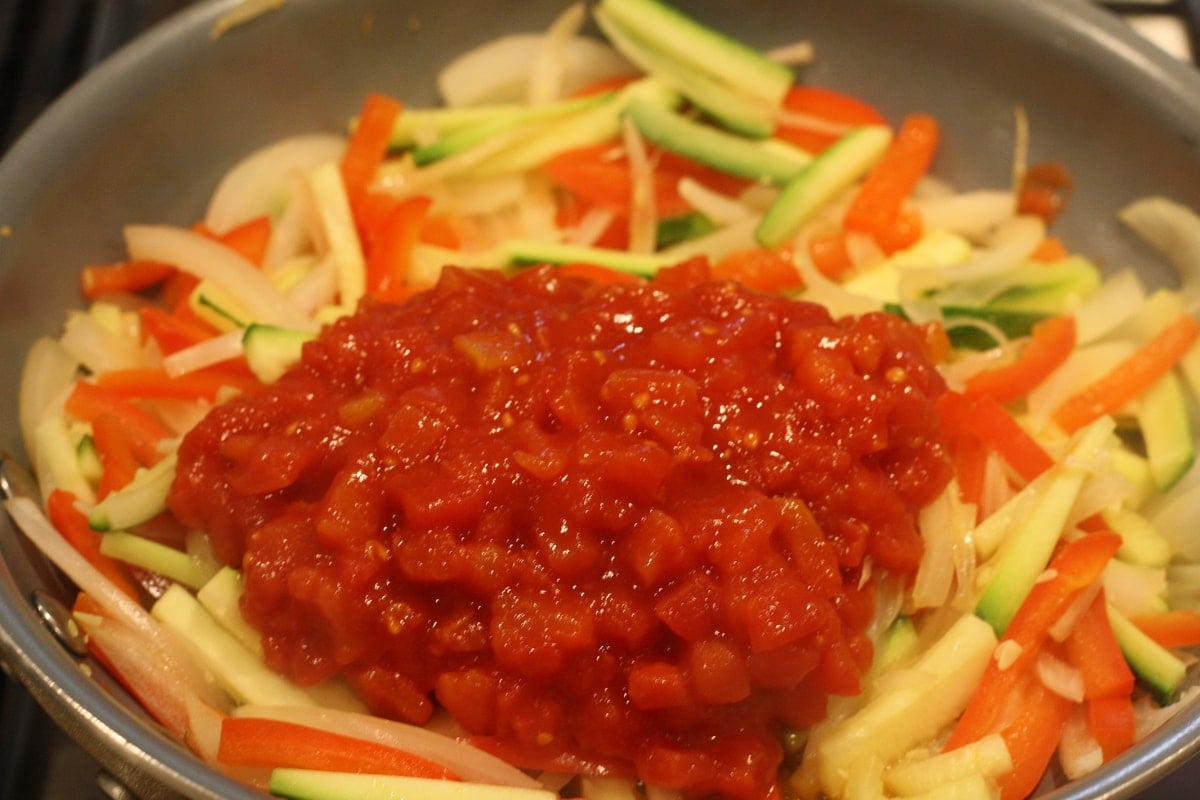 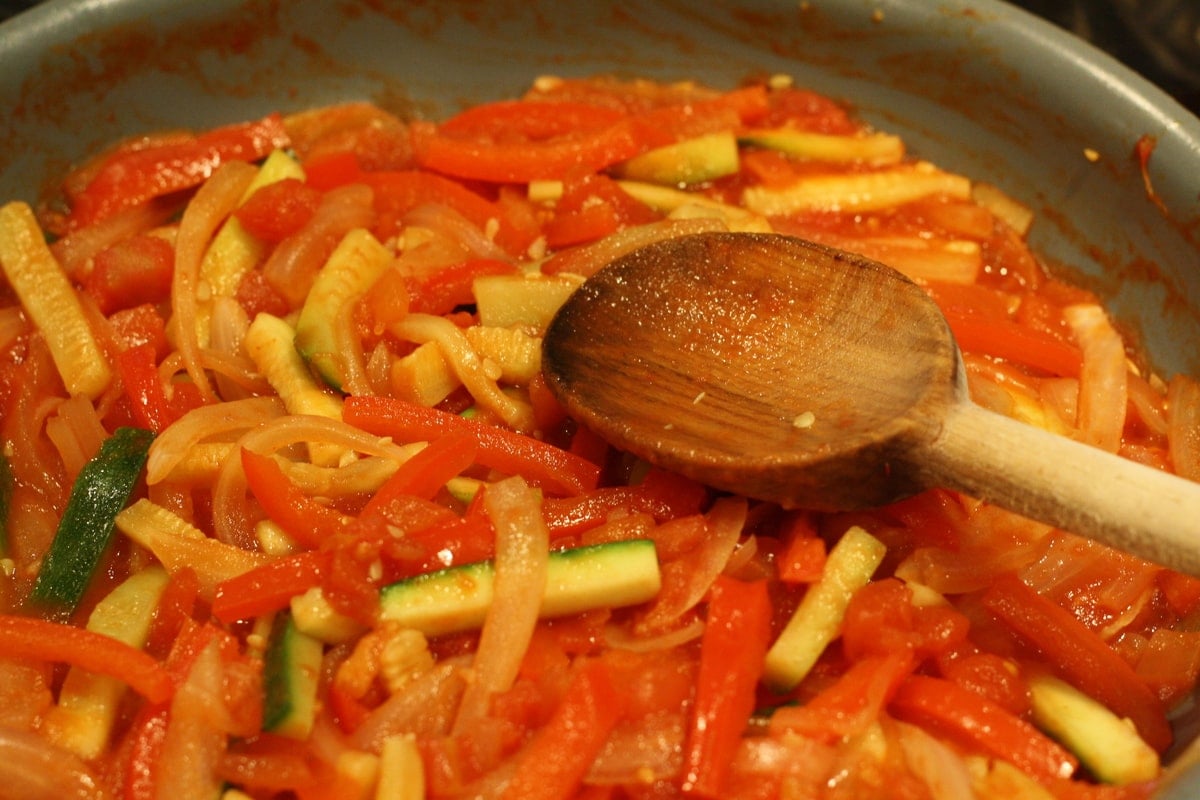 9. Now comes the annoying part: shredding the cod and removing all the small bones and any cartilage. The bigger bones are easy to spot, but my cod had many tiny ones. Be careful when eating this dish—chew slowly! 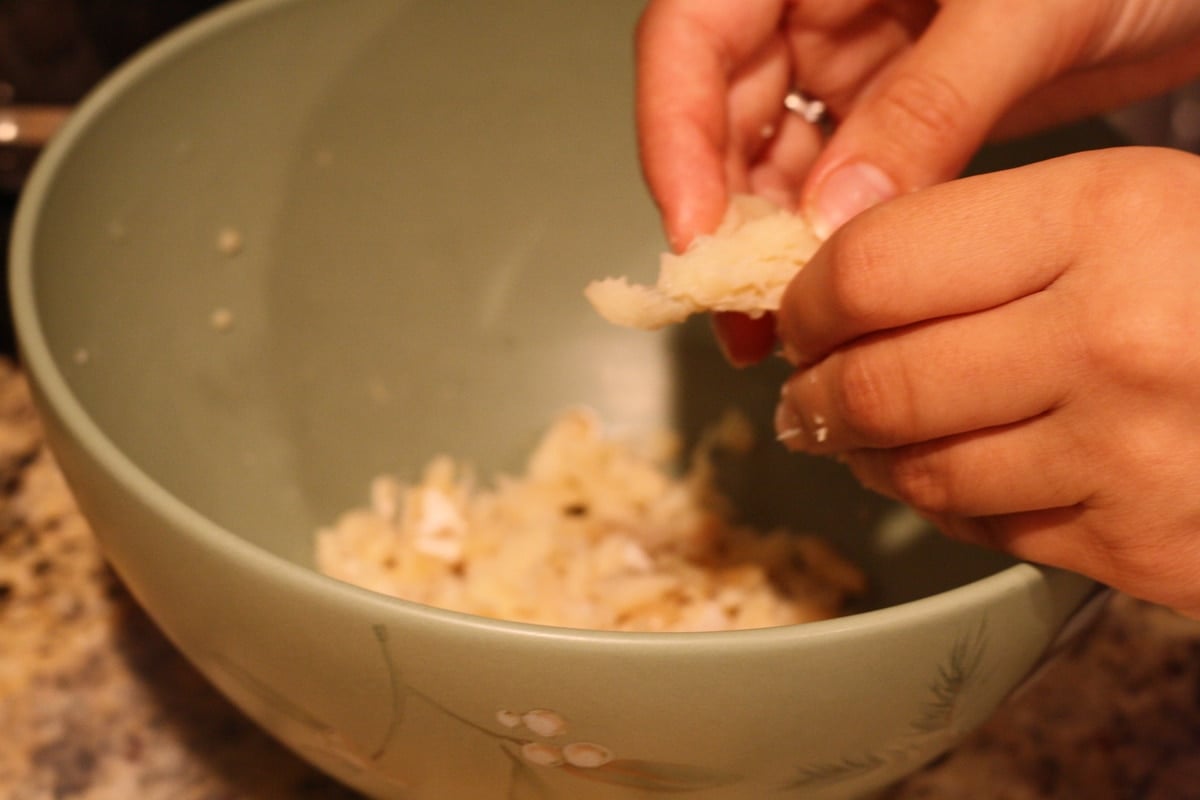 10. When finished shredding the cod add it to the vegetables and stir until evenly mixed.

11. Finally, the fun part– assembling the dish. Mix the remaining 1/3 tomatos and tomato paste together and spread along the bottom of the baking dish. Add a layer of lasagne sheets. 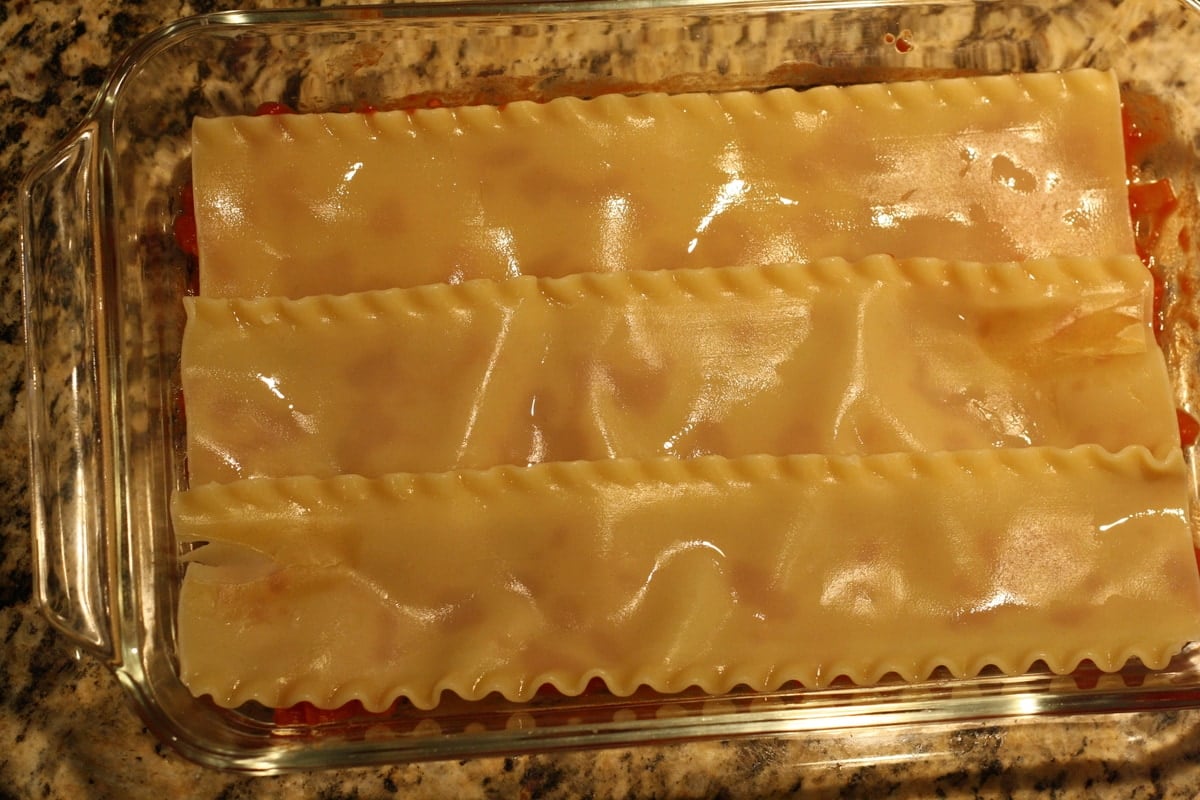 12. Top with the cod mixture and then with béchamel. Then add a layer of cheese (I used a shredded blend of Italian cheeses) and some grated parmesean. Repeat the layers as many times as you can (I only did two but a smaller dish wouldn’ve allowed for more). 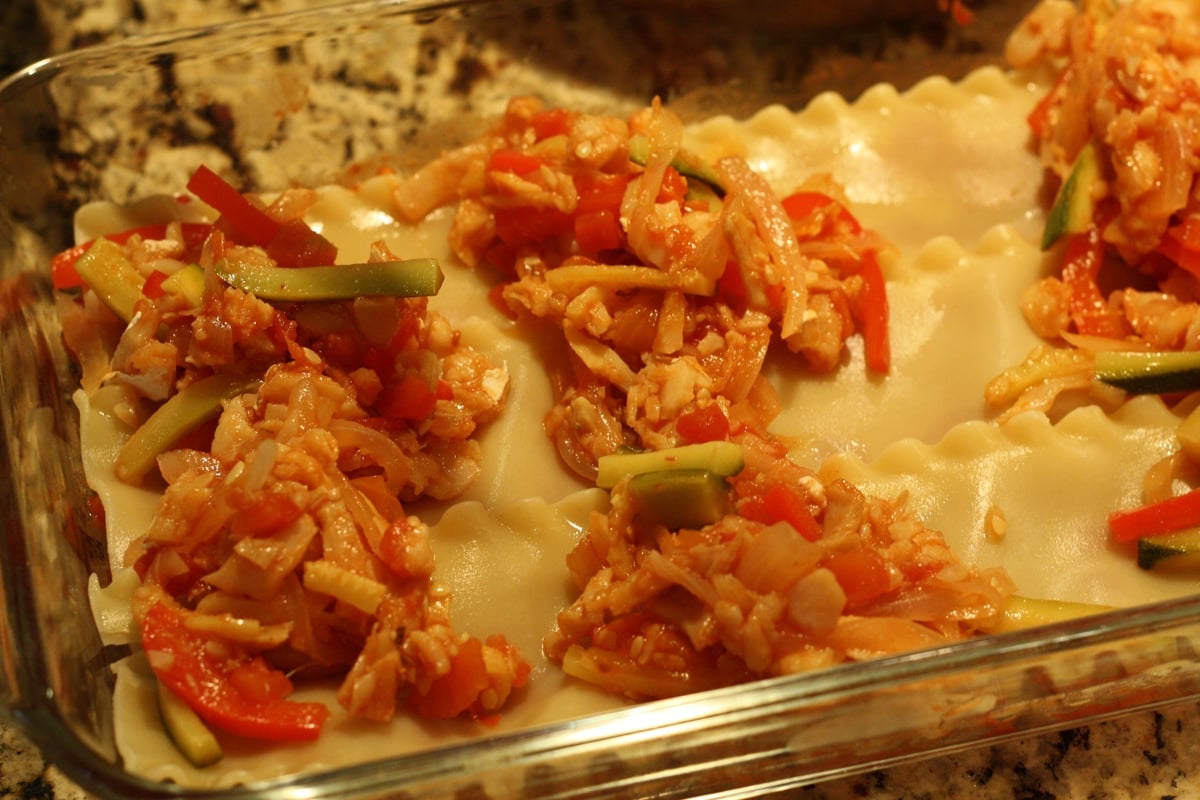 13. Bake in the oven, uncovered, for about 35 minutes until nice and browned.

14. If you prefer a crisper top you can always raise the heat to broil for 30 seconds to one minute before taking it out of the oven.