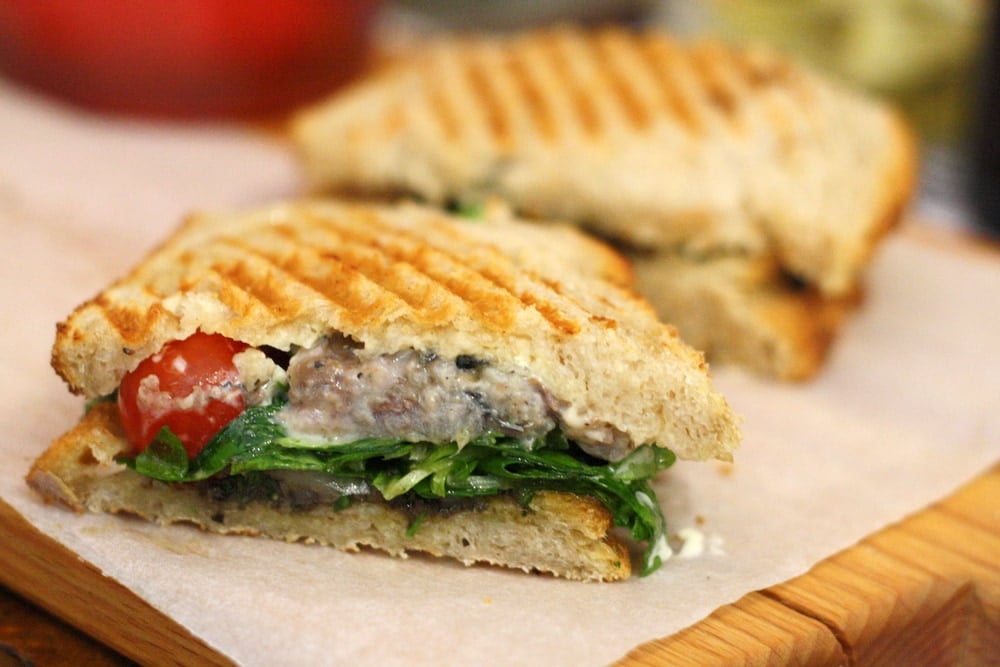 Conde Duque is a central Madrid neighborhood that seems to get cooler by the day— and more delicious too. New and exciting food businesses open regularly, like the Panic artisanal bread shop and the Queseria Condue Duque, a cheese shop run by Rubén from Queseria Cantagrullas.

One of the many restaurants on my always growing Conde Duque list was Crumb, a sandwich shop. For those of you unfamiliar with Spanish cuisine, sandwich shops are not at all traditional (with the exception of the Rodilla chain, which serves different fillings stuffed between pan de molde).

Spaniards do eat sandwiches (cheese, ham, or tortilla are the main options for bocadillos on a baguette and different seafood salads or ham and cheese are common as a sanwich between white bread) but generally not in lieu of a meal. A sandwich is usually a mid-morning or mid-afternoon snack, or something you’d bring hiking or on a bus trip. But as the world globalizes, so does cuisine, and sandwich shops can be found scattered all around Madrid these days.

I’m a big fan of subtle fusion and Crumb’s menu is a great example, offering sandwiches with carrillada (braised beef cheek) and another with smoked Spanish sardines. They also make their own breads and sauces, another rarity here in Spain.

But would they do it well? After so many disappointments lately I was rooting for them to get things right!

They started us with a bowl of pickled veggies— I am obsessed with anything pickled so I was happy. We were drinking the Cibeles de Trigo, a Belgian style craft wheat beer from Madrid. I liked Crumb’s selection of craft beers, however the prices were higher than usual. €4.00 for a beer in Madrid is steep, especially when the bar next door sells the same beer at €3.50.

As much as I wanted to try the carrillada sandwich, I didn’t want to eat the whole thing. Alejandro is a pescatarian, so we settled on sharing a grilled celery and beetroot sandwich with goat cheese and pesto, and the famous sumak spiced smoked sardine sandwich with olive tapenade and cherry tomatoes. The beets were sweet and delicious and they paired perfectly with the creamy goat cheese. The sandwich was very good, but lacked a bit of punch and texture.

The sardine sandwich had been written about all over the Spanish food blogs, and I had high expectations. It was good– very good, actually. But I still felt it lacked some punch, something to take it to the next level. I think it needed acidity (I added some of the pickled carrots in). Perhaps they’re playing things too safe?

Each sandwich came with a side dish, and we were told their mixed potatoes with alioli were great (and they were!). The mix of roasted potatoes, sweet potatoes and tangy alioli was perfect.

The patatas revolconas on the other hand were’t anything special. Mashed potatoes with paprika and crispy pork rind on top, they sound better than they tasted. I’d definitely go for the potato sides next time!

We skipped dessert and paid around €14 per person. Expensive for a sandwich and beer in Madrid, but well worth it given the high quality, innovation and lack of competition.

The Highs: The sandwich combos are creative and change often. Crumb’s bread is homemade and there’s a nice selection of craft beers.

The Lows: The sandwiches were missing that final kick that would have made them memorable. And the price is a bit high for the quantity.

The Verdict: I’ll be back soon to try their other offerings, and am really excited to see places like this popping up!