Spanish spinach and chickpeas (espinacas con garbanzos) is a must-try Andalusian dish that’s easy to make at home. This traditional spinach and chickpea stew is popular in Seville, Spain where it’s served in all the local tapas bars. It’s super simple and quick to prepare — on the table in only 30 minutes!

It’s one of those dishes that you keep thinking about long after you’ve taken the last bite.

I first ordered espinacas con garbanzos in Seville, convinced by a friend that this simple sounding spinach and chickpea stew was a Spanish culinary masterpiece. Served piping hot, it was as comforting as any homemade stew should be, and I immediately understood her obsession.

Espinacas con garbanzos are a traditional tapa in Seville, especially popular during the chilly winter months and during lent.

But the dish’s history goes far beyond Andalusia. Spinach comes from Ancient Persia (modern Iran), where Arab traders got their hands on it and eventually introduced it to the Mediterranean. There are records of spinach being a popular Spanish vegetable by the end of the 12th century, and it was an important ingredient in Moorish and Sephardic Jewish cuisine in Spain.

Chickpeas (also called garbanzos) originally came from the Middle East as well and made their way into the Spanish kitchen by way of the Phoenicians. Their importance in Spanish cuisine is paramount, and they are a primary ingredient in many popular Spanish dishes, such as the delicious Cocido Madrileño.

This recipe for espinacas con garbanzos strays a wee bit from the traditional version, but the addition of tomato and almonds enhances the heartiness of the dish in my humble opinion.

The best part? This is easily a 30-minute meal, and a healthy, filling, and delicious one at that.

Spinach and Chickpeas: Step by Step

Steps 1-2: This recipe is SO EASY! Start by sautéing the spinach in a bit of olive oil until wilted and reserve.

Steps 3-4: Then add another couple of tablespoons of olive oil to the pan and brown the bread cubes, minced garlic, all spices, and almonds.

Steps 5-6: Put the browned bread and almonds into the blender and blend until you have a paste.

Steps 7-8: Add the drained chickpeas, almond paste, and tomato sauce to the pan and mix until combined.

Step 9: Finally, add the spinach back to the pan and stir until fully combined. Serve in small clay bowls and enjoy!

Are chickpeas and garbanzo beans the same?

Yes! Chickpeas and garbanzo beans are the same food. Chickpeas is the English word for garbanzos (which is Spanish). But we’ve adapted the Spanish name in English as well, leaving us with two options.

What can I serve with spinach and chickpeas?

In Spain, this is often served as a tapa, which means you’d have another couple of dishes along with it to make a full meal. You can serve anything you’d like — I especially like to serve Spanish ham croquettes and my favorite marinated carrots.

Is this dish vegan?

Yes! This Spanish spinach and chickpea stew is naturally vegan. It’s one of my favorite vegetarian and vegan tapas.

Can I make this in advance?

You can make this in advance and it will last up to four days in the fridge (and two months in the freezer). Like most stews, the flavor gets even better after resting.

I like to serve my espinacas con garbanzos as part of a tapas feast (but you can also serve it as a side dish to roasted meat). Some of my favorite tapas to go with it are: 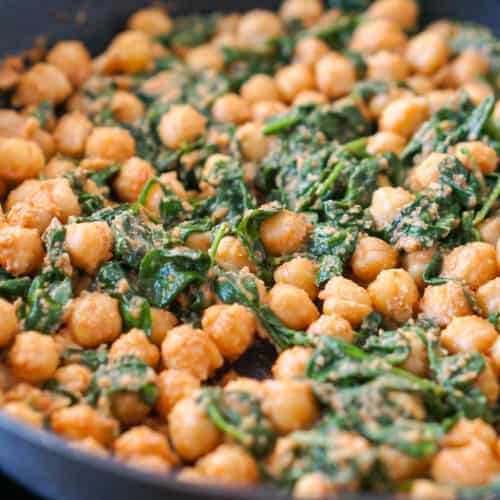 Update Notice: This recipe was originally published on August 17, 2014. It was republished with new photos and text on February 21, 2021.

This delicious spinach and chickpea stew is best served as a tapa or a first course in handmade cazuelas (clay dishes). You can serve some fried bread as a garnish, but I honestly think it’s perfect on its own!

Will you be trying espinacas con garbanzos for your next tapas evening?

If you make my spinach and chickpeas recipe, please let me know how it turned out in the comments!