We arrived in the center of a small Navarran town after a scenic ride through the green countryside. It didn’t look like much to the untrained eye, but glancing at the corner of the pretty Navarran style house, you saw the sign: Martitxonea Sagardotegia, a local cider house or sidrería— and one of the best in the area we’d been told.

A few weeks ago Marti Kilpatrick of Blank Palate explained the tradition of Basque Cider Houses. Although Navarra (also spelled Navarre in English) is not a part of Basque Country on a Spanish map, it is a part of Basque Country culturally. And the tradition of these seasonal cider house eateries is just as important as anywhere else. As we walked in at 9:15 p.m. it seemed we’d arrived early, the place was empty. I began to doubt what I’d heard– empty on a Saturday night surely couldn’t be a good thing.

But with my first refreshing sip of crisp cider, I knew I was in for a fantastic evening, and sure enough, come 10:00 p.m. the people came rolling in by the busload.

Fun Fact: Many of the guests did indeed arrive by the busload as people often hire small buses to take a group of friends to a rural cider house. This way no one has to drive home drunk!

The menu at the majority of Navarran and Basque Cider houses is always the same:

Tortilla de bacalao (An omelet made with salted cod) 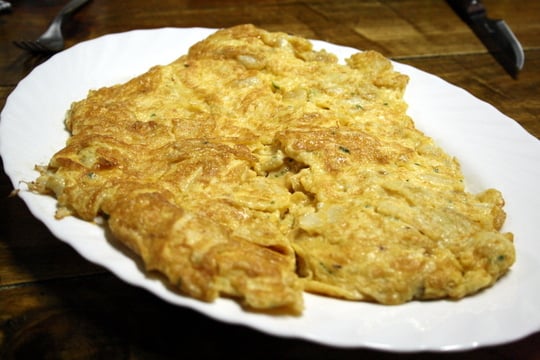 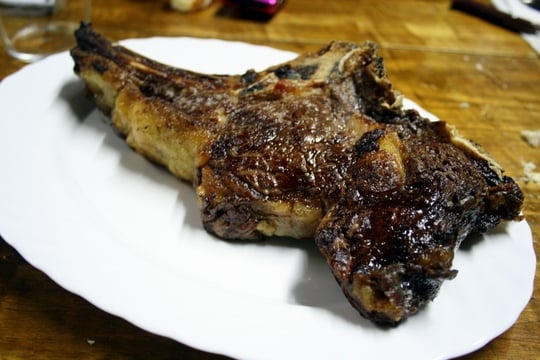 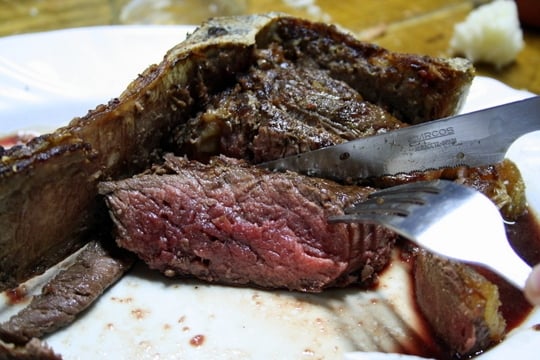 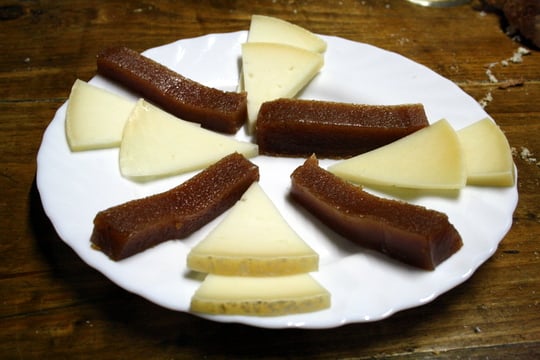 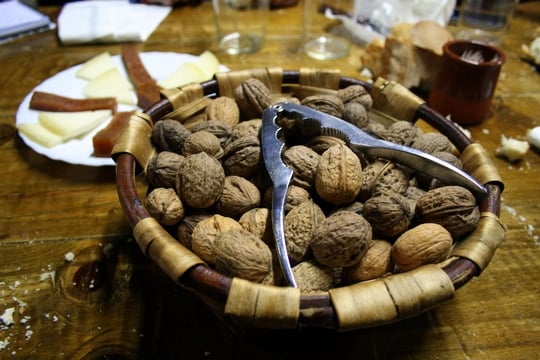 Some Basque cider houses also serve a course of codfish with peppers, but Martitxonea didn’t. They did, however, have six different ciders on tap inside the cider house, and one or two in the factory space outside! And we got to try them all…

But before talking about the cider, I’d like to explain something the owner, Inaxio Begiristain told us. “I don’t want anyone to confuse a cider house with a restaurant,” he said, “this is a workshop, a town.” That’s something you should have clear before heading north to try the delicacies in the photos above, you are not going to a restaurant.

Basque Cider Houses – Not to be confused with a restaurant

First of all, cider houses are seasonal. Opening anywhere from mid-January (the 19th of January is the official date) to late February, most cider houses then close at the beginning of May. During this period, people come from near and far to taste the year’s cider, and restaurants all throughout Spain place big orders when they find one that they like.

The cider house atmosphere is completely informal. There are no tablecloths and no special requests. The menu cannot be changed, vegetarians are not welcome, and don’t even think about ordering coffee after your meal. And while Martitxonea Sagardotegia was warm enough, many cider houses don’t provide heat for their guests– though as the cider starts flowing you won’t even notice!

This may sound impossible, but cider houses in this region of Spain didn’t use to serve food at all. The Sagardotegia originated in the 11th century as places where people would come to taste the year’s cider, and since they preferred not to drink on an empty stomach, they’d bring food to prepare there. Over the years members of Northern Spain’s many gastronomic societies would go as a group, and cooking at the cider house became the norm.

That evolved somewhere along the line to having the cider house prepare a set menu that people nowadays pay between 25€ and 30€ to enjoy, along with all you can drink cider.

It is also worth pointing out that the cider we are talking about is totally different than the hard cider found in most countries. It is called natural cider in Spanish because it isn’t sparkling or sweetened. Despite not being carbonated, the pouring technique does aerate the cider and gives it a bit of effervescence. The alcohol content is usually between four and six percent, so it is very easy to drink!

How to Pour Basque Cider

Unlike the “throwing” pour technique popular at Asturian style cider houses (where the waiters come over to the table with a bottle of cider and proceed to lift the bottle high above their heads, pouring the perfect stream of cider into the short cider glass below) Basque cider houses do things differently. Since they offer their guests the opportunity to taste their ciders straight from the barrels, there are no bottles involved.

Instead, you simply take your glass and approach your barrel of choice. It is best to go in a team, as you want to start to serve yourself with your cider glass as low as possible– almost touching the floor. Your partner can turn on the tap, as you slowly raise your glass towards the barrel. When you have about five ounces inside your glass your partner takes over with his glass, trying not to waste any cider. Your cider should have aerated and have a bit of foam, and you should drink it fast!

If a barrel is already open, follow the instructions above– but be careful, our Navarran hosts told us that if you open the tap and others line up behind you to serve themselves, you have to stick around until the last person’s glass is filled— you have to close the tap.

But when you hear txotx! get ready for madness. This means that the owner is opening a new tap, and the entire cider house seems to jump out of their seats to get in line for a taste of the new barrel.

“Txotx refers to the small piece of wood that closes the barrel’s tap. So when we open a kupela (a cider barrel) we say txotx” explained Inaxio. “You are inviting people to drink the cider and you are also telling them that the barrel has been opened for the first time.”

But txotx is much more than tasting a new barrel of cider. It is an invitation to get up, move around, and socialize. Strangers start chatting, old friends reunite, and everyone has a smile on their face.

The Whole Town Joins In

Inaxio also made the point again and again that a cider house is more than a private business. He recognizes its importance and bond to the entire town. He realizes its importance to tourism in the region, as many Spaniards come from the cities for a weekend in the countryside. He talks about the members of the community involved in the cider’s production from start to finish, and the fact that the food served at the cider house is locally sourced and relies on members of the community for its level of quality.

The key to a Basque cider house is its simplicity. When a member of our group who lives in cider loving Asturias, asked why the Navarran cider houses aren’t open all year round, simply switching over to bottles after the barrels run out, the locals gave a blank stare. The idea of going to a cider house in the summer was just too strange for most to fathom, but Inaxio explained it well, telling us that they had work to do at the cider house all year round, and that a year-round eatery would take away from that. Opening up for the year would also take away from the special appeal the cider house has by staying seasonal. It would become something common and people might not come as much. Worst of all– people might confuse it with a restaurant!

I had been dreaming about this experience since the very first time I read an article about it a couple of years ago. The bloody steaks, cold cider, and the countryside setting were incredibly appealing. I’m happy to say that the cider house exceeded my expectations. A true social event with great food and drink– I’m hooked. I’ll be back in a heartbeat and eager to try out some new ones next season.

Check out my trip to one of San Sebastian’s fantastic cider houses below!

Have you ever been to a Basque cider house? What did you think?