Christmas is a time for eating, drinking, and being together here in Spain. Discover the most traditional Christmas foods in Spain with these delicious Spanish recipes for a classic holiday feast!

Update Notice: This post was originally published on December 14, 2015 and was updated with new photos and text on November 9, 2020.

Christmas in Spain is celebrated, above all else, at the table. Families pack into overflowing dining rooms for holiday meals that last longer than most American football games.

We have plenty of opportunities to feast throughout the holidays, starting with All Saint’s Day on November 1st and stretching until the Epiphany on January 6th. In between, there are various Saint’s Days, Constitution Day, Christmas, and New Year’s!

These Spanish Christmas recipes that have been passed down through the generations are really the main event.

They are perfect for a huge dinner on Christmas Eve and throughout the holiday weeks, until your final slice of roscón de Reyes cake is finished on Three Kings’ Day on January 6th.

What are the main holiday meals in Spain?

There are five giant meals (at a minimum!) before the holiday season is over:

While the menu varies widely from family to family and region to region, here are a few Spanish Christmas recipes to give you a taste of the holidays in Spain.

As the family gathers for the meal, a bounty of small dishes, spreads, and finger foods covers the table.

Some ideas for festive Spanish tapas include:

Smooth Tetilla cheese from the northwestern Spanish region of Galicia is the star of these lightly fried cheese puffs. With a hint of smoky paprika and a sweet drizzle of local honey, they tend to disappear quickly!

You won’t find cheese puffs very often in Spain, but at Christmas, no holds are barred. This is a time when people break out new recipes and creative creations to add some flare to the traditional dishes.

Get the recipe for these Tetilla cheese puffs here.

No Spanish Christmas table is complete without shrimp. While these little sea creatures go by many names in Spain, some of the most popular varieties are langostinos (prawns or jumbo shrimp) and gambas (deepwater rose shrimp).

During the holidays, shrimp are served in many different ways. They are mixed into salads, chopped into savory tartlets, tucked into mini-sandwiches, and stacked whole onto plates under a sprinkle of salt.

If you can get your hands on some of Spain’s best shrimp, like fresh gambas rojas from the southern town of Huelva, definitely go for a simple recipe like this Perfect Boiled Shrimp to let their true flavor shine.

Cured Iberian ham is a must at Spanish Christmas dinners. More of this delectable cured ham is sold in December than in every other month of the year!

While the good stuff is served in paper-thin slices to be savored all by itself, the less knightly hams often make their way into a variety of traditional tapas.

My personal favorite is croquettes. Cured Serrano ham and béchamel cream sauce on the inside, olive oil fried crust on the outside. Spanish croquettes are my vice.

Get the recipe: Here’s how to make traditional Spanish croquettes

Many family Christmas spreads include an ensaladilla Rusa as part of the tapas course. This cold potato and mayonnaise-based salad can be time-consuming to make from scratch, but well worth it. It’s delicious and one of those dishes people expect to see over the holidays!

Get the recipe: Ensaladilla Rusa

After a trove of tapas, things start getting serious. The small plates are whisked away to be replaced by a dish requiring proper utensils. Most often the first course is a light, brothy soup or a salad.

Some ideas for a Spanish inspired first course for the holidays include:

The parade of seafood does not stop at tapas. Many of the most traditional first courses at a Spanish holiday meal consist of some type of seafood soup. Common ingredients include shrimp, clams, and mussels along with fish like hake or monk.

Try this recipe (scroll to the end) for Spanish-inspired seafood chowder!

In Catalonia, the Christmas soup always comes with a specific type of pasta shell called a galet. During the holidays giant plastic sculptures of the shells are part of the Christmas decorations in many cities in the region.

Galets Soup gets its rich flavor from the meat that is boiled with the soup. While the large cuts are saved for the second course, ground meat is often stuffed into the shells or served alongside them as in this recipe.

A light salad is also sometimes seen as the first course at Spain’s holiday meals. Salads here tend to let the vegetables and toppings shine by using very light dressings. Often times a drizzle of olive oil and a splash of vinegar is all the dressing it needs!

A favorite winter salad of mine is this tuna belly, blood orange, and avocado salad.

8. Clams in Sherry a la Marinera

In Andalusia, the holidays always include a big platter of these delicious clams a la marinera. The garlic and sherry sauce is absolutely delicious and worth a try!

You can make these at home easily with this simple Spanish clams recipe.

It’s a good thing that Christmas meals in Spain are hours-long affairs, otherwise, I’d never be hungry enough by the time the second course came! And trust me, you want to be hungry for this feast.

The rest of the meal seems like child’s play compared to most second course dishes. Roasting is the name of the game whether it be lamb, fish, turkey or suckling pig.

9. Baked Fish with Lemon and Herbs

If the holiday meal is at night, the main course is most often going to be fish. Some of the most popular Christmas fish in Spain are lubina (European seabass), rodaballo (turbot), dorada (gilt head bream) and bacalao (cod).

In this recipe for baked dorada with lemon and herbs, the fish is baked whole, locking in moisture and ensuring the fish turns out nice and juicy. For another classic preparation, you could try this pan-fried Spanish cod.

Neighborhood butcher shops are bustling places during the Christmas season as families hustle in to order and pick up their meat for roasting.

More often than not, that meat is lamb. While suckling pig and even some beef recipes may make it to the table, the dish I most often hear about at Spanish Christmas dinners is roasted lamb.

This slow-roasted Spanish lamb recipe makes a darn good rendition of a traditional Spanish roasted lamb using ingredients that are easy to find outside of Spain.

This is not a super traditional holiday dish, but it is one of the most delicious and historic Spanish chicken stews, so I’d bet it’s been served at plenty of holiday feasts! Plus, it uses expensive ingredients like almonds and saffron to add flavor, meaning it’s fit for a special meal.

Get the recipe: Chicken pepitoria

I have an entire article about Spanish desserts, and Spanish Christmas desserts have even more to offer!

Just when you think the eating has ended, a three-part dessert awaits. First comes what you might typically think of as Spanish dessert: flan, some sort of bread pudding, cake, or tarts.

Last comes the liqueurs like brandy or orujo (moonshine-like liqueur distilled from grape skins often flavored with herbs or made into a creamy Bailey’s like liqueur). Your Spanish Christmas recipes are not complete without these sweet additions!

For a Spanish dessert at your table, try some of my favorites:

An incredibly moist cake that would go perfectly with a post-lunch coffee. The olive oil in the recipe really comes through, meaning you should use the good stuff!

Not a lemon fan? Try this apple olive oil cake instead!

Simple, delicious, and not too heavy, arroz con leche is a perfect Christmas dessert. A hint of cinnamon makes this cold, creamy rice pudding extra delicious.

Get the recipe here!

While there are now umpteen types of turrón, the classic recipe is short and sweet: honey, almonds, sugar, and egg whites.  This recipe for turrón duro (or hard turrón) is from Alicante.

A very similar version from Jijona, known as turrón blando (soft turrón) is much softer and reminds me of a sweeter, more compact version of almond butter.

It might not be exclusively a Christmas dessert, but Spanish cheesecake deserves a spot at the table for any special meal! This decadent Basque cheesecake recipe is so rich that one cake will feed plenty of guests. It’s so delicious that you’d never guess it only had a handful of ingredients! 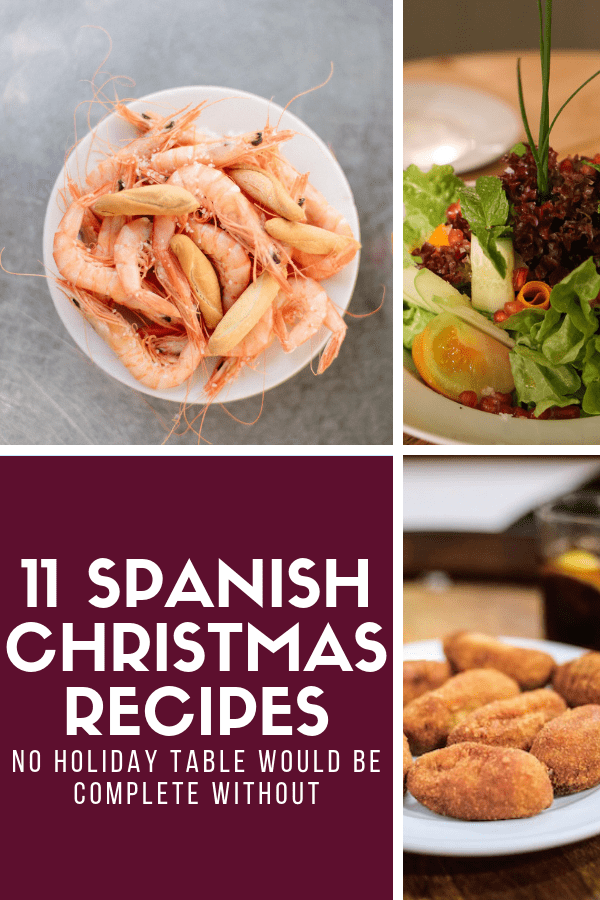