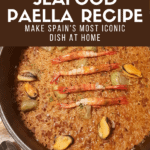 There is no dish more famous than this Spanish seafood paella recipe. Read on to discover how to make the perfect paella for seafood lovers. It’s easier than you may think!

When I talk to travelers visiting Spain for the first time, they always ask the same thing.

“Where’s the best paella in town?”.

No dish is as synonymous with Spanish cuisine as this big plate of fragrant, saffron-infused rice served up at tables around the country.

But unfortunately, a good paella is often hard to find! That answer always leads to confused stares and even a handful of tears.

But it’s true! In many Spanish cities, you’re going to find it hard to find a seriously tasty paella. Why?

Where is paella from?

Let’s get one thing straight. Paella is only from a small part of Spain.

Purists argue about its exact origins; debating all up and down the east coast of Spain. It’s true that the paella Valenciana is the most traditional version, but it tends to not be the one visitors to the country want to eat.

Owing to the history of paella as a peasant field dish, the classic recipe is full of meats like chicken, rabbit, eel, and even snails!

Luckily for us, the most famous version is the seafood paella.

Seafood paella (paella de marisco) became popular on the sunny beaches of Valencia and Barcelona. This is the pan of rice that the world fell in love with. Apart from beautifully fresh fish, shrimp, squid, mussels, and clams, the real treasure of seafood paella is the rice.

Cooked with a delicious saffron and seafood broth, the rice is a taste sensation all on its own!

It’s All About the Socarrat

The mark of any decent paella is the socarrat.

This is the dark, crispy underbelly of the rice, the layer on the bottom that almost burns as the stock evaporates from the pan.

Unlike risotto, paella doesn’t need stirring while it’s cooking. You’re looking for individual grains of rice, not a creamy conglomerate. This means that as the pan (called, confusingly, a paella) dries out, the lowest layer of rice will go black and crunchy.

If a waiter serves you blackened rice when you order paella, don’t complain. In fact, thank him! This is the best part of the dish, the bit that gives texture and rich caramelized flavor.

How to Make the Perfect Seafood Paella

To make this easy seafood paella, make sure to start with the right kind of rice. Bomba rice is the grain of choice for most Spaniards, but it can be hard to find in other countries. If you can’t get hold of it, don’t worry; any short-grain rice will be acceptable.

Since the flavor of the rice is going to come from the broth, it’s best to make your own if you have time. If you can’t, just buy the best seafood broth available that fits your budget.

Yes, it costs more than any of the other ingredients in this recipe. Yes, it’s hard to find. But it really is the thing that takes your paella to the next level!

Aside from the taste and aroma, it will give your rice that beautiful golden glow that you just can’t replicate with food coloring (no matter what the cheap tapas bars on the Costa del Sol tell you).

You can also pre-prepare your sofrito (the base of the dish) in advance. I like to whip up a big batch of sofrito and use it throughout the week in a variety of Spanish dishes. See my standalone sofrito recipe here!

Now let’s get to your classic Spanish seafood paella recipe.

Making a great paella is not difficult, but it does have its tricks. Follow my step-by-step tutorial below for great results (and keep scrolling down for the full recipe with measurements!).

Steps 1-2: Start by heating the seafood stock and white wine along with a pinch of saffron in a pot. Keep this warm (the saffron will infuse into the broth) until you need it later on. Then add olive oil to your pan and start making your sofrito by first sautéing the diced onion (until translucent) and then adding the minced garlic and sautéing for a few more minutes.

Steps 3-4: Next you’ll add the diced tomatoes and the paprika, and a pinch of salt. If you are using a salty seafood stock you may want to omit the salt here. Keep stirring and cooking the mixture down. The secret to a good sofrito is a bit of time. You want it to become jam-like in texture.

Steps 5-6: Next you add your squid (calamari) which can be cut into rings or chunks, depending on preference. Coat in the sofrito and sauté for one minute.

Steps 7-8: Now we add the rice! There are different opinions on the best method here, but I add my rice and then stir to coat and “fry” it a bit. Now we’ll add the broth…

Steps 9-11: Now you add the broth mixture to the pan — and don’t stir! This is key, once the broth is in no stirring allowed! Simmer on low for 10 minutes. Then add the shrimp or prawns on top for the final 10 minutes. If needed, flip the shrimp after five minutes to make sure the cook fully on both sides. They’ll be nice and pink when finished.

Step 12: In the meantime, steam the mussels in a pot by simmering a little water or wine and adding the closed mussels and covering. After a few minutes, you’ll see that the mussels have opened. If any stay shut, simply discard.

Steps 13-14: Place the cooked mussels on the paella in a decorative way. When the rice has been cooking for 18-20 minutes in total it should be done. I like to turn off the heat and place a dish towel on top for about three minutes. Serve with sliced lemon wedges.

This seafood paella recipe serves four people as a main dish, or six as a starter (pictured below). You can plate in advance, or (what I prefer) is bringing the whole pan to the table and serving it family style.

If you want the crispy bottom, my trick is to put it back on the heat after resting for a few minutes under a dish towel. Turn the heat up to medium-high and as soon as you hear crackling (some say it sounds like rain) stop and take it off the heat. This sound should mean you have a crispy bottom to enjoy!

Making paella is easy — the entire recipe comes together in under an hour and the sofrito can even be made in advance, meaning the actual preparation would take only about 20 minutes.

That said, it does have its tricks. Here I’ll answer some of the most common questions I’ve heard about this seafood paella recipe — hopefully it helps you make the perfect paella!

Can seafood paella be made in advance?

You can prepare the sofrito for seafood paella in advance, but I don’t recommend preparing the entire paella. If not eaten immediately, it is easy for the rice to become overcooked and soft. Paella is best enjoyed immediately after making.

How long does seafood paella last in the fridge?

You can store any leftover paella in the fridge in an airtight container for 1-2 days.

Can you reheat seafood paella?

Yes, you can heat up leftover paella on the stove or in the microwave. I recommend taking it out of the fridge about 30 minutes before reheating. Then put some olive oil in a frying pan and gently stir fry the paella until warmed through.

Can seafood paella be frozen?

I don’t recommend freezing paella. It’s best to make a smaller serving that you can eat within two days.

What rice do you use for paella?

Paella is made using short to medium grain Spanish rice varieties such as Bomba or Calasparra. These rice grains absorb 3x the amount of liquid of normal long-grain rice and stay intact, meaning they’re full of flavor.

Paella is a healthy part of Spain’s Mediterranean diet. It’s a balanced meal of grains, proteins, and healthy fat.

Does seafood paella ever have chorizo?

Traditional seafood paella would never have chorizo as an ingredient. But there are many versions today where people do add chorizo. One example is this prawn and chorizo paella recipe.

What do you eat with seafood paella?

Seafood paella is usually the main dish at lunchtime in Spain. It may be eaten with a few tapas as starters, or with a couple of dishes on the side. Popular tapas eaten with paella include gazpacho, croquettes, and patatas bravas.

Is saffron needed in paella?

Saffron is not necessary in a paella, although it is one of the traditional ingredients. Many Spaniards today will use food coloring (called colorante) instead, and others will substitute turmeric for the color. If you omit saffron the rice will not have its distinctive yellow color, but it will still be delicious.

Do you need a paella pan?

A paella pan and open flame are highly recommended for a fantastic traditional paella, but you can make delicious paella on the stovetop with any wide, heavy skillet you have. If you are interested in buying a paella kit, it comes with the tools to make authentic outdoor paella. It’s lots of fun (and a great gift!).

Here in Spain, we usually enjoy paella as the main dish at a rice restaurant (arrocería). We order a paella for the table (prices are usually per person) and a bunch of tapas to start while we wait for the rice to be prepared.

Typical tapas served with paella are cold soups like gazpacho or salmorejo, fried foods like croquettes or patatas bravas, or salads such as an ensalada mixta or ensaladilla. For a full list of popular Spanish tapas, see here.

Note that when you go out during the week for a menú del día (a fixed price lunch menu) paella is usually served as the first course, with either meat or fish to follow as the main. In this case, you get a small portion of a large paella they’ve made in the kitchen and not a whole paella pan at your table.

Seafood paella may be the most popular paella in Spain, but there are plenty more amazing rice recipes (or, arroces) to be enjoyed! See more about Spanish rice dishes here. 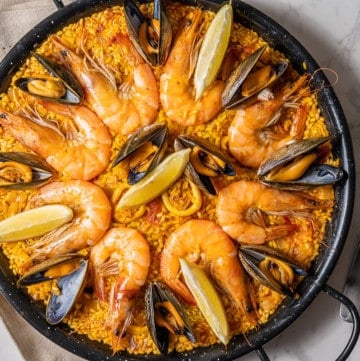 Update Notice: This post was originally published on May 25, 2020 and was republished with new text and photos on April 6, 2021.

What’s your favorite type of paella? Do you prefer the trendy seafood version or the classic, snail-filled paella Valenciana? Let me know in the comments below!