Tourists flock to Spain by the millions for the tapas, the sunshine, the beaches and the beer. But thousands of years ago, the enchantment of Spain ran much deeper… 4,000 meters deep, to be exact.

Far beneath the Spanish topsoil stream piping-hot, mineral-rich thermal waters. Those healing, hot waters spring to the surface in hundreds of natural hot springs throughout the country.

These hot springs have attracted tourists for more than 2,000 years, starting with the Celts in the 9th century B.C., followed by the Romans and then the Arabs. Remains of the Roman baths are now buried beneath the impressive arches of the Moorish hammams. Parts of these ancient baths are still standing and the hot springs surrounding them are still as popular as ever.

From steaming pools in the middle of mountains to first-class spas sourced entirely by naturally occurring thermal springs, there are oodles of warm waters to choose from in Spain. The unique minerals found in these waters are said to cure all types of ailments, from rheumatism to gastrointestinal problems.

Awesomely, many of these hot Springs in Spain are conveniently located near many of the foodie villages I’ve been wanting to visit as well! These are the six Spanish hot springs at the top of my must visit list.

Along the banks of the Miño River in the far northwestern corner of Spain lies one of the largest and most popular collection of hot springs in Spain. Spewing from the ground at a nearly 150ºF, the thermal waters here are some of the warmest in Spain. Many of the pools here bathing temperatures of over 100ºF.

There are both free public hot springs in Ourense private private spa-like thermal baths. All are located just outside the city along the Miño River.

Foodie Find Nearby: Plan your trip to coincide with the bi-monthly Octopus fairs in Ourense. On the 7th and 17th of each month, the fairgrounds fill with steaming cauldrons of of the region speciality: octopus!

In the heart of Spain’s most prestigious wine region are the Arnedillo hot springs. These free pools of medicinal waters are like a steaming river in the middle of rolling, vineyard-covered hills.

There are three pools along the Cidacos River in the small Riojan village of Arnedillo. The warmest offers waters up to 98ºF. These pools are open year round and all night. Sign me up for a wintery dip beneath the stars!

You can also visit the Arnedillo Spa and Hotel, which uses the same waters and offers a full gamete of spa services like massages and saunas.

Foodie Finds Nearby: While in La Rioja, wine tasting is a must. Head to the town of Logroño, the heart of La Rioja’s wine and tapas culture, about an hour’s drive from Arnedillo for bar hopping, wine tasting and tapas crawling. Or go the extra 20 minutes to Haro to visit one of the many storied bodegas clustered in this small town.

While they may not be the hottest thermal baths in Spain, they are arguably the most natural. These 82º F springs are tucked between the Mola and Crestall mountains about halfway between Barcelona and Valencia. The best way to access this all-natural hot spring is by hiking in on one of the various trails throughout the surrounding mountains.

Foodie Finds Nearby: Fontcalda is located in the middle of vermouth country. Traditional bodegas making (arguably) the best vermouths in Spain surround these mountains. Try Casa Mariol, a 30 minute drive north in the village of Batea; the Spanish vermouth juggernaut Miró in Reus, a hour’s drive from Fontcalda; Or head to the big city and pop into one of many great vermouth bars in Barcelona, a 2.5 hour drive from Fontcalda.

In the southern region of Andalusia, the evidence of Roman and Moorish rule is hard to miss. But while the most well-known remnants of these ancient cultures (such as the Alhambra palace in Granada) draw the crowds, another, more intimate relic awaits in the small village of Alhama de Granada.

The village of Alhama de Granada, located halfway between Granada and Malaga, is home to one of the best-preserved and oldest thermal baths in Spain. The name itself comes from the Arabic word for baths: “al-hammam.” Here you can see parts of the original 15th century Arab baths, which were built over their Roman predecessors.

Try out the healing waters at the Hotel and Spa of Alhama de Granada (open from April through November) or opt for the free version: various pools of the thermal water outside the hotel grounds.

Foodie Find Nearby: About an hour’s drive from Alhama is the town of Granada, arguably the best city in Spain for tapas. Granada sets the bar for free tapas in Spain, serving up fantastic and filling plates of free food with each drink. The more drinks you order, the better the tapas get!

Have you ever been to the hot springs in Spain? Which would you recommend? 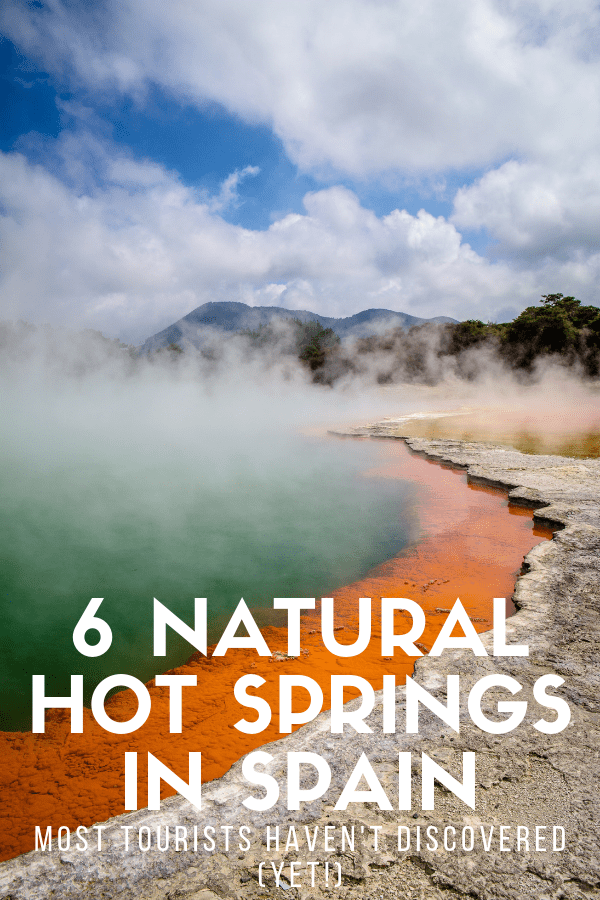