Looking for a fantastic flan recipe to spice up your Thanksgiving dessert table? This delicious pumpkin flan is based on a flan de calabaza that I enjoyed in Valencia, Spain. It’s perfect for the holidays!

Spanish pumpkin recipes are split evenly between sweet and savory. On the savory side, there are creamy pumpkin soups and calabaza asada (grilled pumpkin). And for the sweet tooth, there are light and airy pumpkin donuts (buñuelos de calabaza) and pumpkin-filled pastries.

One of my favorite Spanish pumpkin dessert recipes is pumpkin flan. This dessert is hard to find in Spain and is more common in Valencia, where many regional recipes use the local pumpkin.

This flan recipe is based on one of the most classic and simple Spanish flan recipes and substitutes some of the liquid with pumpkin purée. The result is a creamy and delicious pumpkin flan, enhanced with pumpkin pie spices such as nutmeg, ginger, and cinnamon.

This recipe is perfect for a holiday dessert after a classic Spanish lunch, and would gladly be a part of your Thanksgiving spread (if you celebrate!).

If you like this recipe, you won’t want to miss these other holiday favorites! 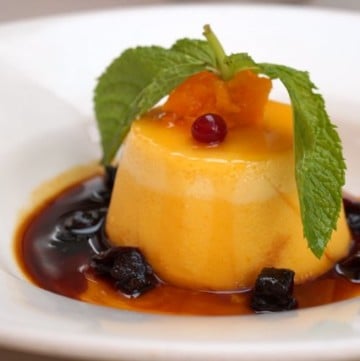 What do you think? Will pumpkin flan replace the pumpkin pie at your Thanksgiving this year? Or perhaps it’ll just be another option on the dessert table?