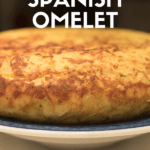 So grab the ingredients and try making your own Spanish omelette with this easy tortilla recipe!

When made right, a good Spanish omelette is the very definition of traditional Spanish cuisine: simple food made with the best ingredients. This is the formula for the greatest Spanish recipes.

I lived in Spain for three years before I was brave enough to make a Spanish tortilla of my own.

Why so long? Well, to be perfectly honest, the Spanish omelette intimidated me. It can be so incredibly good– and also terribly, horribly bad. I’ve had my fair share of both ends of the spectrum and wanted my first tortilla to be delicious.

Was it perfect? Of course not!

The first time I finally got the nerve to try a Spanish tortilla recipe I spent an hour in the kitchen, which resulted in a tasty, though partially burnt, tortilla concoction. It wasn’t an all-out failure, but it was far from the Spanish omelette of my dreams!

But with time and patience, I learned the tortilla tricks and perfected my very own Spanish omelette recipe.

This is my version of Spain’s tortilla de patatas, with onions (a controversial ingredient among Spaniards) and left a bit gooey in the middle (you are free to cook it longer). It is delicious, easy to make (at least once you get the hang of it!), and makes the ideal Spanish tapa any time of day.

The beauty of the authentic Spanish tortilla recipe is its simplicity. It has only five ingredients (and onion-haters would argue only four!): eggs, onion, potato, olive oil, salt.

Making a Spanish omelette is very easy — most Spanish families I know make at least one per week! My mother-in-law makes a tortilla de patatas as a quick and easy dinner meal when she doesn’t have anything else planned.

But there are ways to make your tortilla extra delicious, and those are the tricks I’ll show you here.

Step 1: Start by adding your sliced potatoes to hot olive oil in a heavy pan. They need to be fully covered in the oil — so you’ll need to use quite a bit! Don’t worry, you can reuse it a few times, so it won’t go to waste. Cook the potatoes over a medium heat, remember that you don’t want french fries!

Step 2: While the potatoes are cooking, add the sliced onions to a separate pan with a bit of olive oil. Sauté these over a medium heat until starting to caramelize (about 15-20 minutes). Add a splash of water if needed from time to time so that they don’t burn.

Step 3-4: When the potatoes are fully cooked some may start to break apart. That’s okay, but don’t let them become too broken down. Keep an eye on the onions so that they don’t burn.

Steps 5-6: In a large bowl, beat your eggs (which should be at room temperature). Add the cooked onion and mix. Next, you need to drain the potatoes in a large colander (save the excess olive oil for another recipe!). Once the potatoes have cooled slightly (about five minutes or so) gently stir them into the onion and egg mixture. Be careful that the hot potatoes don’t start to scramble the egg.

Top Tip: Season with salt (many people taste the raw tortilla batter to adjust for salt, but if you prefer not to just add a couple of teaspoons for now). Now let this mixture sit for 15 minutes (I know it’s tempting to just go ahead and make the tortilla — but trust me!).

Step 7: Gently pour the tortilla batter into a frying pan over medium-low heat. You don’t want the pan to be too hot. Gently cook the tortilla for about six to eight minutes on the first side. You can run a spatula along the sides to make sure it’s not sticking.

Step 8: To flip the tortilla grab a large plate — it must be larger than the frying pan! See my note below about the two tortilla trick to make this easier. Put the plate on top of the pan and flip quickly and confidently. It will be runny, but don’t worry — you’ll put everything back into the pan to cook the other side!

Step 9: Slide the tortilla back into the frying pan and let the other side cook for another six to eight minutes (let it cook longer if you like your tortilla fully cooked through). Then flip back out onto a clean plate. Allow it to cool for at least ten minutes before slicing and enjoying.

Is there a difference between Mexican and Spanish tortillas?

Mexican and Spanish tortillas are completely different foods. They both originate from the meaning “circular food”. In Mexico, tortillas are made with either a flour or corn dough, and cooked over fire to make a flat bread that is usually filled with or accompanied by meat or beans. In Spain, a tortilla refers to an omelette made with beaten egg, to which you can add other ingredients such as potato, onion or spinach. It’s cooked in a frying pan, which gives it its round shape.

What goes with Spanish tortilla?

Spanish tortilla is an extremely versatile food, and something that is eaten in Spain for breakfast, lunch, dinner, and snack. A variety of Spanish tapas go well with tortilla, as does pan con tomate, or a mixed salad.

What is the difference between Spanish tortilla and Italian frittata?

Spanish tortilla and Italian frittata are both omelette like egg dishes. The difference is the way that they are cooked. A Spanish tortilla is cooked in a frying pan on the stovetop and is flipped over halfway through to ensure both sides cook evenly. Sometimes it is served a bit runny or raw. A frittata is usually started on the stovetop, but finished in the oven. It is fully cooked through.

Can you eat Spanish tortilla cold?

How do you store Spanish tortilla?

To store a Spanish omelette you must first wait for it to cool fully. Then cover with plastic wrap or place in an airtight container and store in the refrigerator.

How long can you keep Spanish tortilla in the fridge?

Tortilla will last up to three days in the fridge.

How do you reheat Spanish tortilla?

To reheat Spanish tortilla you can microwave a slice for a very short period (try 15 seconds to start). Alternatively, you can pan fry on the stove with a bit of olive oil. Note that Spanish tortilla does not need to be reheated, many people enjoy it cold or room temperature and don’t want to risk the eggs getting rubbery by reheating.

Can you add other ingredients to Spanish tortilla?

Of course! Spanish tortillas come in all sorts of varieties. The most famous is the tortilla de patatas (potato omelet) but there are plenty of other delicious combinations. Try cheese and ham, fresh asparagus and mushroom, or goat cheese and caramelized onions. I have great recipes for a tortilla with ham and peas and another Spanish omelette with zucchini and leeks.

Since tortilla is so versatile, it really depends when you’re eating it!

Any of the following dishes would go perfectly with Spanish tortilla. Make a handful for a tapas themed meal! 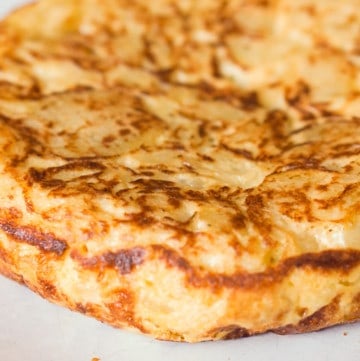 So that is it! Remember my top tips are to cook the Spanish omelette at a low heat (that way it won’t burn) and experiment the first few times with different cook times until you get it right. Also, I prefer to slice the potatoes thin so that they do break apart, and I prefer to caramelize the onions quite a bit… yum!

Let me know if you try making this authentic Spanish tortilla– I’m curious to see how it goes! To learn more about the history of Spanish omelette, you can read more here.

What do you think– are the best Spanish omelettes are made with onions or not? Caramelized? Runny in the middle or cooked through?