Today I share with you my Spanish family’s authentic gazpacho recipe. Traditional Spanish gazpacho is easy to make, super healthy, and delicious! It’s usually served as an appetizer or even a drink.

My recipe comes straight from Andalusia and it truly the best gazpacho recipe out there for the traditional version. I hope you enjoy it!

I hated gazpacho the first time I tried it.

I was having lunch with my host family in Granada when my host mom, Josefina, plopped down a big glass of orange gazpacho.

Josefina, in spite of her claims to have once owned a restaurant, was not known among the study abroad students for her skills in the kitchen. In fact, her gazpacho was one of the first things she had made completely from scratch since we had been there!

I took a sip of the lukewarm concoction and tried my best to like it– but I just couldn’t. Bland and boring, it was like warm, runny tomato juice served in a glass.

Yes, it took me nearly five years to return to Spain and try Spanish gazpacho again. But I’m so happy I did.

As someone who had become obsessed with gazpacho’s creamy cousin salmorejo, I decided it was about time to give traditional gazpacho another chance. After all, my Spanish friends would swear by the stuff– according to any Spaniard, gazpacho is the best cure for a cold, flu, hangover, break-up… whatever is wrong, gazpacho will fix it!

Searching for the best gazpacho recipe

I decided to investigate, and proceeded to read at least 20 different Spanish gazpacho recipes from my cookbook collection and favorite Spanish recipe sites.

I blended a few different versions together to come up with what may be the best Spanish gazpacho recipe ever.

What is key about this version of gazpacho is its potential to be eaten from a bowl (versus sipped from a glass) with lots of delicious toppings. This makes it more like a traditional cold soup and less like a vegetable juice.

As I explained, the most traditional way to eat gazpacho in Spain is by drinking it from a glass. But I love eating it from a bowl with toppings.

My favorite topping by far is Granny Smith apple. It sounds strange, but the tart apple really compliments the gazpacho.

Other ideas for gazpacho toppings:

So if you think you don’t like Spanish gazpacho, please try it again. If I could end up loving it, you probably can too! 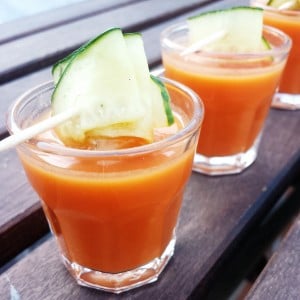 It is really that simple– a 15-minute power meal! Fresh vegetables mix together to create a delicious and refreshing cold soup with this traditional Spanish gazpacho recipe.

Gazpacho is now my favorite light dinner on a hot summer night, and leftovers make a great start to the next day!

Try my twists on this gazpacho recipe

Over the years I’ve done a lot of experimenting! Try these twists on the classic gazpacho for something different.

Does anyone else have their own Spanish gazpacho story– a food that you didn’t like at first taste but that you now couldn’t live without? Please share it below! 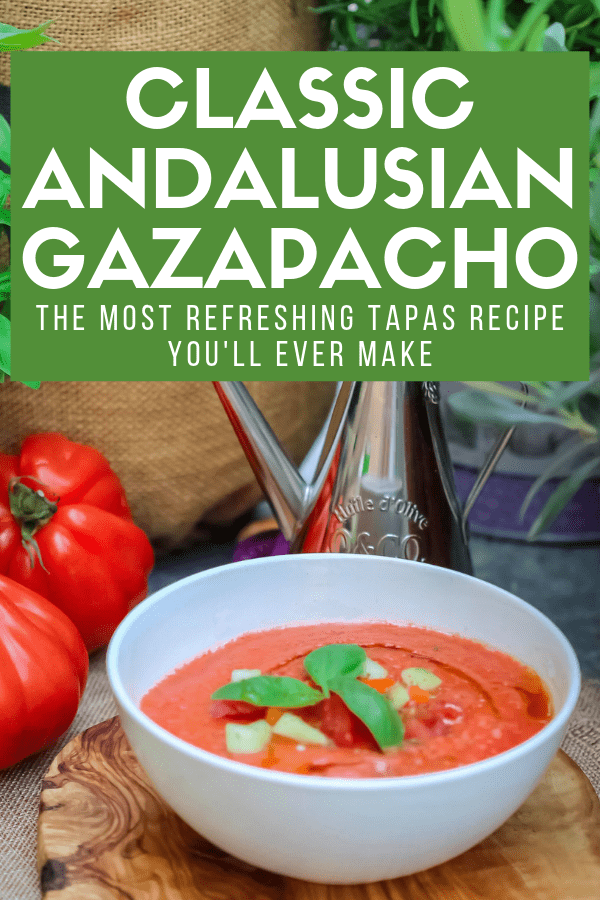