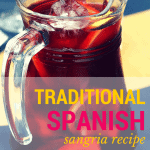 Spanish sangria– it’s one of Spain’s most popular yet misunderstood drinks!

Read to the end for some twists on Spanish sangria– I’m always trying new recipes.

In the time before food blogs and TripAdvisor, tourists came to Spain expecting little more than paella, sangria, and flamenco, opting to eat microwaved paella over traditional tapas and to watch choreographed flamenco instead of enjoying a Spanish style night out.

While these types of tourists still exist, people are definitely savvying up and food and travel icons like Anthony Bourdain set a clear path for anyone to enjoy the local specialties.

But while the modern tourists bounce around looking for Spain’s best craft beers or tasting our popular gin tonics, what has become of the classic pitcher of sangria? Is sangria even Spanish? Is it just a tourist trap and a way to use bad wine?

Where is sangria from?

Sangria is indeed Spanish. The word comes from “sangre” (blood), alluding to the red color of the drink.

The history of sangria is pretty straightforward — when the Romans inhabited the Iberian Peninsula over 2,000 years ago they planted a lot of grapes to make wine. At this time water wasn’t always safe to drink, so it was common practice to fortify it by adding some alcohol to kill off the bacteria.

The first sangrias were a product of this practice, and likely a mix of wine, water, herbs, and spices. Anything to make what they were drinking taste better!

Fast forward a couple thousand years, and many food historians believe sangria became popular after its debut at the 1964 New York World’s Fair. It was offered at the Spanish Pavilion, and Americans took note of this sweet and delicious red wine punch. Soon recipes were printed in cookbooks, and American bartenders were making sangria their own.

In many ways, this is still the story today. In most of Spain, sangria is not something locals drink often. And when they do, it’s likely purchased pre-made — from the same part of the supermarket you’d find the soft drinks.

Occasionally people do make their own sangria, and there are many bars serving their version of sangria to tourists. But locals will usually prefer the simpler tinto de verano drink in the summer.

For these reasons, I give some of the credit for sangria’s popularity to the Americans (which may seem a stretch to some), as after the 1964 New York World’s Fair American cocktail aficionados took the sangria they’d sampled at the Spanish pavilion and elevated it to the delightful combinations you’ll find in American cocktail bars today (green apple and sake sangria anyone?).

In the end, sangria is simply the name for a wine based cocktail— although I’d let cider and sake slide in there too. But here in Madrid, you won’t find too much variety. The capital of Spain is often respectful to the classic Spanish recipes, and the traditional Spanish sangria recipe is no different.

So today we are talking about classic sangria — the traditional red sangria recipe that you’ll find in most Spanish tapas bars.

How to Make Traditional Sangria: Step by Step

Making sangria is super simple! I’ve outlined the most detailed version in the recipe found below (but you can omit the optional ingredients and it will be even easier!).

Step 1: Make a simple syrup. I like to use a 1:1 ratio for mine. Let it cool while you prepare the rest of the sangria.

Steps 2-5: Take your citrus fruit (I use lemon and orange) and peel the rind. Then juice the fruits.

Step 6: Now you just combine everything! Put your wine into a big pitcher (or pot) and add all of the citrus juice, peeled rinds, and simple syrup (if using).

Steps 7-8: Now give it a stir and add your spices (I use a cinnamon stick), any additional fruit, and brandy or alcohol (if using). Add the soda (if using) right before drinking.

Step 9: Voila! A traditional Spanish sangria to enjoy with your favorite tapas.

What is sangria made of?

Traditional Spanish sangria is made with red wine, water, herbs, spices, and fruit. Today’s sangrias have a wide variety of ingredients, and each recipe is different. Soda and brandy are common modern additions.

What is the best wine for sangria?

The best wine for making sangria is a young and fruity red wine. Any Spanish tempranillo wine would be perfect. You don’t want anything aged, and you want to make sure the wine is good quality to avoid a hangover.

Traditional sangria recipes do not include brandy. Brandy is an optional ingredient in sangria that will make the cocktail stronger because of the higher alcohol content.

Is Sangria high in alcohol?

Classic sangria is not very high in alcohol (less than a glass of wine). The reason is it is basically diluted wine. If you add hard alcohol like brandy, however, the alcohol content goes up.

Is Sangria high in sugar?

Traditional Spanish sangria only includes sugar present in the wine and in the fruit added to the sangria. So it is not a very high-sugar beverage. But some people add additional sweeteners, so it depends on the recipe.

Can I make sangria in advance?

Yes! Sangria can be made ahead of time, and it actually tastes better that way. I recommend making sangria the night before serving it, which gives the fruit plenty of time to macerate and release their flavors. Then, right before serving, add the soda (if using).

How long will homemade sangria keep in the fridge?

I recommend keeping sangria no more than two days in the fridge. By that point the fruit is past its prime.

Sangria is the perfect beverage while enjoying a variety of Spanish tapas. Some of my favorite tapas to make with a pitcher (or two!) of sangria are:

Like the idea of sangria, but looking to stray from the classic red wine version? Try one of these other delicious sangria recipes! 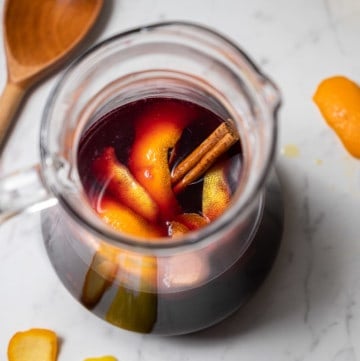 Update Notice: This post was originally published on May 15, 2014 and was republished with new text and photos on March 12, 2021.