×
Home / Blog / Malaga / 8 Insider’s Tips for the August Fair in Malaga: What You Need to Know

You might have heard of the April Fair in Seville, but the Feria de Málaga—Malaga’s August Fair—is right up there with it as one of Andalusia’s biggest parties of the year. Every year the August Fair draws crowds from Malaga, the surrounding towns, and all over Spain, turning the city into one massive party that you don’t want to miss. Here are some insider’s tips for enjoying the August Fair in Malaga any year.

How to Make the Most of the August Fair in Malaga

1. Check out the fireworks along the beach as the fair officially begins

Malaga is a beach city, so it’s only fitting to start off the weeklong party with fireworks along the shore. Head down to the beach at Malagueta or Huelín and enjoy dinner at a chiringuito (beach bar) before the fireworks. It’s the ideal recipe for a perfect evening: you’ve got the sea breeze, espetos, and the official start to the August fair in Malaga!

Another noteworthy event is the religious procession heading to the Sanctuary of the Virgin of the Victoria (the patron saint of Malaga). With riders on horseback dressed in traditional Andalusian clothing, horse-drawn carriages and people following the procession on foot, this massive migration marks the beginning of the daytime fair in Malaga.

3. Enjoy the fair in the historic center

One of the most distinctive things about the August Fair in Malaga is that there are two different locations. Unlike the April Fair in Seville, malagueños enjoy their feria right in the center of town, as well as at the fairgrounds. The main street, Calle Larios, is decorated with huge biznagas (Malaga’s local flower) and draped with fabric in green and purple (the local colors) to shade everyone from the hot August sun.

From noon until 6 p.m. you can enjoy the fair in the center by drinking Cartojal wine, having tapas and generally enjoying the colorful atmosphere. To truly make the most of your time at the fair, head to the center for an aperitif, some flamenco dancing or to meet up with friends around 1 p.m. The atmosphere is uniquely Andalusian and it is a street party that is unlike anything you’ve ever seen.

4. Check out the flamenco scene

Every day of the fair at 1 p.m., there’s a performance of “los verdiales.” The verdiales is a style of flamenco music that originated in Malaga. If you are familiar with flamenco, you might notice that it is similar to a fandango. This is a great way to get into the spirit of the feria as you enjoy your tapa and drink, of course! Another option if you’re looking to see traditional flamenco during the week of feria is heading to the Peña Juan Breva at 1:30 p.m. each day.

Read more: Where to see authentic flamenco in Malaga

5. Don’t forget about the beach

One of the best things to do during the August fair in Malaga is to take a break from all the partying in the center and at the fairgrounds. Locals occasionally head to the beach and enjoy an afternoon with the sun and surf. Just don’t forget to bring a picnic lunch and a cold drink.

6. Know your way around the Real de la Feria

The Real is the part of the fair that is held on the fairgrounds at the edge of the city. Take the F bus line (a special route just for the August fair), which stops on the Alameda as well as on Avenida de Andalucía. It will take you from the center of town straight to the fairgrounds.

Here, you’ll find the traditional Andalusian fair you’ve been dreaming of. The real is populated by dozens of casetas (little tents) which are all open for anyone who would like to come inside for drinks, tapas and dancing. These are all decorated in a traditional, colorful style with paper garlands, lights and tables set up for families to sit and enjoy the atmosphere.

Some casetas are more like pop-up dance clubs where you can groove to summer hits rather than flamenco music. And don’t forget to stop by the rides where you can get a fantastic view of Malaga from the huge ferris wheel or win a prize throwing darts.

The typical flavors of Malaga are the star of the show during the fair, including fried fish, tortilla, croquetas, fried eggplant with honey, cured meats and cheeses, and more. You can also enjoy one of the most typical sandwiches from Malaga, a round panini called a “campero.”

The typical drink of the feria is Cartojal wine, which is served ice cold and often shared among friends. Other options include rebujito (a mix of dry manzanilla sherry and 7up) or a tinto de verano (red wine mixed with lemon soda). Make sure to drink a lot of water, too—the heat in August makes the cold wine go straight to your head! At the end of the night, stop by the stands selling churros and buñuelos with chocolate sauce drizzled on top for a sweet end to your day at the fair.

Unlike in other places such as Seville where dressing up is an essential part of the fair, in Malaga you’ll find a mixture of people who dress in trajes de gitana (the traditional flamenco dresses), and those who dress in their normal summer clothes. Women tend to wear a huge fake flower in their hair (even those who aren’t wearing a flamenco dress), along with fun, oversized earrings and necklaces. You’ll find these for sale all around the center, and they come in almost any color of the rainbow to match your outfit. And remember to bring along a fan—with the hot weather, you’ll find yourself using it as more than a fashion accessory.

Men typically wear shorts and a t-shirt or polo with comfortable shoes during the day. At night, they dress as if they were going out for a night on the town (a nice shirt, long pants and nicer shoes). Some of the casetas turned dance clubs won’t let people in if they’re wearing flip flops or sneakers, so remember to dress accordingly.

More summer fun: The complete guide to how to enjoy Malaga in August 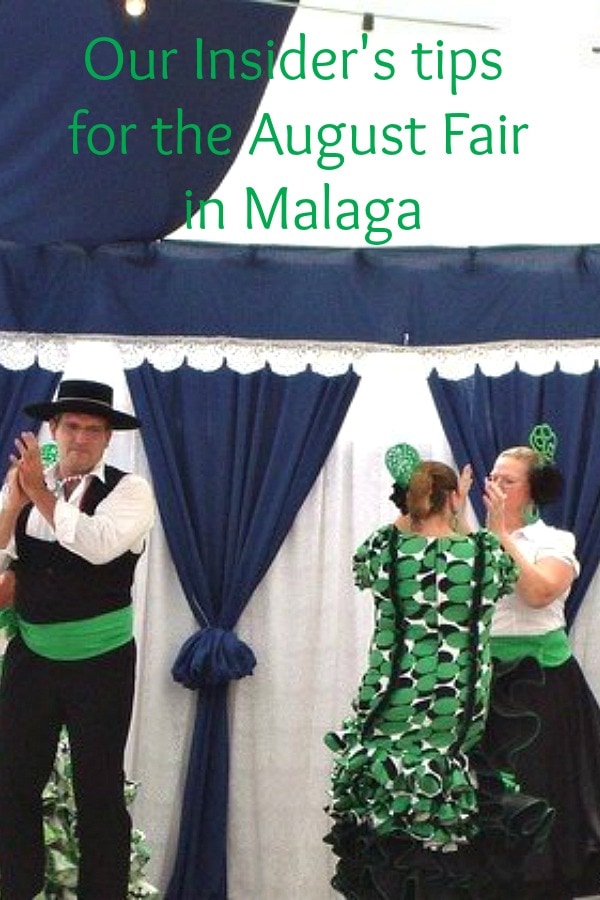