Whether it’s the heavenly jamón iberico de bellota or the spicy punch of chorizo, it is unthinkable to spend time in Spain without sampling Spanish cured meats. And while ham and chorizo tend to get all the glory (and for good reason), there are dozens of other cured delights to tickle your tastebuds.

Each region in Spain has very distinct styles of spicing and curing meats. Some rely on hot smoky paprika, while others opt for the herby combination of rosemary and garlic. The vast majority of Spain’s cured meats are made from pork, although beef shares a bit of the spotlight in a few of the northern regions.

Whichever region you’re in, you’ll be sure to find a bounty of Spanish cured meats to try. Here are eleven of our favorites!

Cured Spanish ham is the irrefutable king of Spanish cured meats. But not all hams are created equally. The main difference? The breed of pig. Though Spain is home to many different breeds of pigs, we generally refer to two main types of jamón: jamón serrano and jamón ibérico. The pigs used for jamón serrano, are usually common white hoofed breeds (like Duroc). The pride and joy of Spanish hams are the legs with black hooves, from the Iberian Black Pig breed, native to Spain and Portugal. And the best of the best? Jamón Ibérico de Bellota. Acorn fed Iberian Black Pig. Worth every penny!

The price and quality of jamón varies enormously, from 8€ per kilo to more than 200€. That disparity stems from how the pigs were raised. The highest quality hams are made from pure-bred Iberian pigs who spend their lives feasting on wild acorns beneath the forests of southwestern Spain.

While the thickness, hardness and spiciness of chorizo varies greatly from region to region, the basics are always the same: semi-fatty pork, a healthy dose of smoked paprika and salt.

Chorizo from León is spicy. Chorizo from Asturias is often seared in local cider. Chorizo from Cantabria often has oregano and thyme. And chorizo from Salamanca is often made from the high-quality Iberian pigs. All are worth a taste!

Similar to chorizo, salchichón is made from ground or finely sliced pork and slowly cured with salt and often smoke. The difference is in the spices. While chorizo is red from the paprika, salchichón is usually a light pink spotted with black pepper. Both have salt and often garlic added in as well.

This cured pork tenderloin is left whole and virtually untouched in the curing process. Besides a sprinkling of salt and paprika around the exterior, lomo retains the pure smooth flavors of the pork.

As like jamón, there are two types of lomo, the regular lomo embuchado and the higher quality lomo embuchado ibérico or caña de lomo ibérico de bellota. The latter is recognizable by the beautiful marbling of the Iberian meat.

Who would’ve thought that paprika-spiced spreadable pork could pair so superbly with honey? The Balearic Island of Mallorca has made these odd bedfellows a beloved specialty throughout Spain.

Sobrassada is made by finely grinding pork from the black Mallorcan pig breed, stuffing it into a wide strip of intestine and slowly curing it with a bit of salt, local Mallorcan paprika and other spices. The result is a spreadable spiced sort of pork paté that is often spread over toasted bread and drizzled with honey. The sobrassada from Mallorca is so popular that the island sells more than 2.3 million kilos of it per year!

Spanish blood sausage, or morcilla, is a very different beast depending on which part of Spain you find yourself. The most popular morcilla comes from the town of Burgos where the pork blood is mixed with rice, red pepper, salt and onion and put into casings. Medallions of morcilla de Burgos are then pan fried to create a crispy edge and creamy interior.

In León, on the other hand, morcilla is even stronger. The coagulated blood is stewed with onions and other spices and served in a pot or on a dish. Morcilla de León is typically spread onto bread.

Cecina is beef’s answer to Spanish ham. Most common in León, cecina is made by curing a cow’s hind quarter for upwards of 7 months. The result is a deep burgundy cured meat that is cut in thin strips and served with a light drizzle of olive oil. The flavor is deep and rich and heartier than its pork counterpart. In León you can also find cecina de caballo/potro (cured horse), so make sure to specify!

This typically white sausage is popular in the northeastern province of Catalonia. It is often served boiled, grilled or lightly cured and sliced. While botifarra comes in many different styles, the most widely recognized version is the white botifarra (botifarra blanca). In contrast to most other Spanish cured meats, white botifarra gets its pale color because it does not contain any blood.

Chistorra are like mini-chorizos. These little paprika-spiced sausages are most commonly found fried atop sunny-side up eggs and a bed of fried potatoes in a dish called huevos rotos.

You can spot fuet by the thin layer of white mold that surrounds its casing. This hard sausage from Catalonia has a characteristically strong pork flavor with black pepper and garlic.

Botillo, with its odd, lumpy, red shape, may look weird but it tastes amazing. Its said that all the little pieces of pork that the butcher doesn’t know what to do with, he stuffs them into a thick sack of intestine with a heap of paprika, salt and garlic to make botillo.

That unusual sack of meat is then boiled and sliced open to reveal a cornucopia of ribs, tail and other spiced goodies. Botillo comes from the Bierzo region of Castilla y Leon province.

Tempted yet? What is your favorite cured meat from Spain? 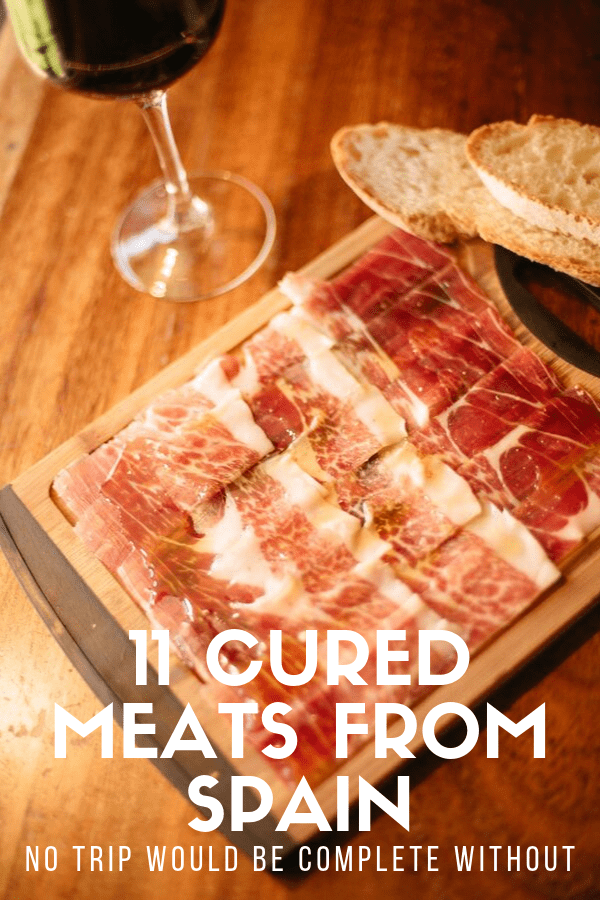