Here in Spain, we eat churros often. They make a delicious breakfast and are a special snack at any time of day. This is my authentic Spanish churros recipe for easy homemade churros the whole family will love.

Most people have tried some sort of churro before, but many people don’t know exactly what churros are. Churros are simply a type of fried dough made of flour, water, and salt. Churros are especially popular in Spain where they are a part of the local breakfast and snack culture.

You can also find churros throughout Latin America and even the US, as they’ve become very popular throughout the world.

What is the history of churros?

The history of churros goes back centuries. Some say Spanish shepherds invented them as an easy alternative to baked goods since the dough is easy to make and fry.

Others say the Portuguese sampled them in China and brought the tradition back to the Iberian Peninsula.

Regardless of the origin, churros became a cheap and popular snack food in Spain and it is likely that Spanish immigrants spread the recipe to Latin America, where today they are quite different and often are stuffed with chocolate, dulce de leche, etc. or sprinkled with cinnamon and sugar.

Read more about the history of churros here.

These are common beliefs about churros that are not true in Spain.

What are the ingredients in churros?

The ingredients are very simple: water, flour, and salt. The proportions vary and to make porras baking soda is also added.

What is the difference between churros and porras?

I like to say that porras are churros fat cousin. They’re another popular type of fried dough that has baking soda in the recipe. They’re fatter and chewier than the traditional thick churros. Everyone has their preference between the two — though I love both!

When do you eat churros?

What about stuffed churros? Or cinnamon and sugar churros?

These are found in Spain at carnivals these days, but really they are typical in Latin America, where this is how churros have been adapted. You won’t find these options at any traditional churros place in Spain.

Spanish chocolate is delicious and a part of the national diet! And Spanish hot chocolate is commonly served with churros at churrerías. But often adults will opt for coffee and leave the rich chocolate for the kids. You can make authentic Spanish-style hot chocolate at home with this recipe.

How do you make homemade churros?

Just in case you don’t happen to live a five-minute walk from a delicious churrería, these crispy tubes of fried dough can easily be made in the comfort of your own kitchen.

I know this because I recently watched my Spanish friend Sensi whip them up in a matter of minutes with ingredients that almost anyone has in their cabinets. Luckily, I took notes and came up with a great (and easy!) Spanish churros recipe for you.

I was surprised to see how easy it is to make churros– my mother-in-law had always told me it was quick and simple, but I never believed her since she never actually made them herself!

If you want to feel like you are in Spain without actually getting on a plane, this authentic Spanish churros recipe is the perfect solution.

Tip: If using a plastic bag to pipe out the churros proves too difficult, you can buy a churros maker! 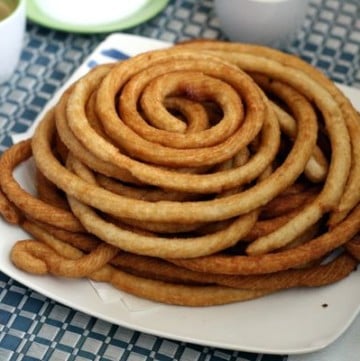 Ready to try my homemade churros recipe? Check out the picture tutorial!

This homemade Spanish churros recipe is easy, quick, and yummy. So next time you are thinking of making pancakes, why not try something new? Enjoy your homemade churros! 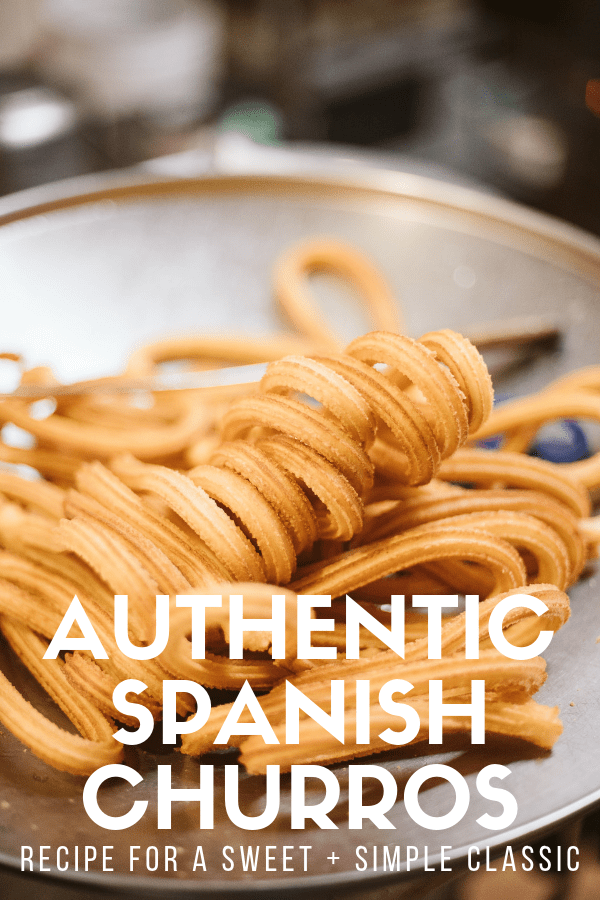