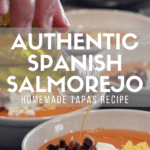 My mother-in-law, Antonia, makes the world’s best salmorejo. Read on for her traditional Andalusian salmorejo recipe (and learn her secret to the creamiest version of this cold Spanish soup!).

Salmorejo is a cold tomato soup that is famous in the south of Spain. It’s similar to gazpacho — but thicker and creamier.

Salmorejo is something you’ll find on menus throughout Spain, but the best salmorejo is always found in the south. On a hot day, there is nothing more refreshing and satisfying than a bowl of cold salmorejo– it’s a must-try if visiting Spain!

The first time I wrote about salmorejo, one of my favorite Spanish foods, was on my very first blog back in 2009. I had just made some for the first time on my own and was very proud that it had turned out almost exactly like my mother-in-law’s famous salmorejo recipe.

Antonia makes the best salmorejo I’ve ever had. I’ve tried other versions in Cordoba, Sevilla, Cadiz, and Madrid but nothing has ever been quite as delicious.

Salmorejo is one of those things that you eat that leaves you feeling 100% satisfied and is super healthy at the same time. It’s a great dish for keeping trim and is loaded with antioxidants.

Most people probably aren’t familiar with gazpacho’s thicker, creamier cousin. While gazpacho is a cold tomato and vegetable soup (often consumed straight from the glass like a V8 juice), salmorejo is simply fresh tomatoes and perhaps a clove of garlic, blended with stale bread, extra virgin olive oil, and sherry vinegar.

The way the olive oil and tomatoes emulsify gives the soup a creaminess that makes many people think that there is actually cream in the soup! (There is not!).

Most people top the cold soup with hard-boiled egg and cured Spanish ham, which I would definitely recommend!

Why is salmorejo cold?

The first time I tried salmorejo was a complete fluke. I was convinced that cold soups were the enemy after a bad experience with gazpacho years prior.

But one day I came home from work absolutely ravenous and Ale’s mom had sent us home with some salmorejo on our weekend visit. No one else was home, so I figured I would just heat it up and no one would be the wiser.

Luckily, the salmorejo never made it to the pot. I took one bite, followed by another, and then another. It was delicious. I couldn’t believe I’d been missing out on this fresh explosion of flavors for so long.

Spanish summers (especially in the south) are very hot. It’s not uncommon for days to reach 107°F (42°C)! So cold soups evolved in this region to keep people hydrated and healthy during the intense summer heat.

Traditional salmorejo is vegan and vegetarian, although my recipe is not vegan because it incorporates a hard-boiled egg into the actual soup. To make this salmorejo vegan, simply omit the egg and don’t top with jamón. Try some of the vegan-friendly toppings listed above instead!

My Salmorejo Recipe: Step by Step

After such a long time singing its praises I know I owe everyone the recipe. So, here it is, the best Salmorejo recipe you will ever try (in my humble, but experienced opinion!).

Steps 1-2: You need to start by peeling your tomatoes. You can do this with a sharp veggie peeler, or by cutting an X in the bottom of each tomato and placing in boiling water for about 30 seconds, followed by an ice bath (a bowl of ice water). If you do it this way the skins peel right off!

Steps 3-4: Now place all the peeled tomatoes into a blender. Blend until completely pureed. Add the stale bread, mix, and let this sit for five minutes.

Steps 5-7: Now, add the salt, garlic, and vinegar. Start to blend again, this time slowly adding in the olive oil. Add it slowly to make sure it emulsifies.

Where is salmorejo from?

Salmorejo comes from the south of Spain, specifically from Cordoba in Andalusia. It’s served as a cold soup and also as a tapa.

What is the difference between salmorejo and gazpacho?

Both salmorejo and gazpacho are cold Spanish soups that are popular in the south of Spain (Andalusia). But gazpacho is a mix of vegetables (tomatoes, onions, peppers, cucumber and garlic) while salmorejo only includes tomato and garlic. Salmorejo also incorporates stale bread into the puree, making it a very thick soup which is eaten from a bowl. Gazpacho has a much thinner consistency and is often enjoyed from a glass.

Yes, traditional salmorejo is a vegetarian recipe. It is also easily adapted for vegans by omitting the egg. In both cases the optional ham topping should be omitted. You can say “sin jamón, por favor” if ordering it in Spain.

Salmorejo is usually served as either a first course (instead of a hot soup or a salad) or as a tapa. In Andalusia, you’ll often enjoy it with other popular summertime tapas, such as shrimp fritters, croquettes, and eggplant with honey. It’s perfect with a cold glass of tinto de verano.

Salmorejo is one of Spain’s most famous cold soups, but there are lots more to try! 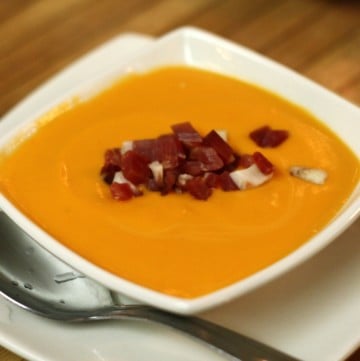 Update Notice: This post was originally published on September 22, 2011 and was republished with new text and photos on March 25, 2021.

Watch me make salmorejo at home in my web story!

After trying many, this is by far the best salmorejo recipe I’ve made, but if you have one that you love please leave me a comment!