Flan is one of the easiest and most delicious Spanish desserts. Homemade flan is well worth making, I hope you’ll try it!

To this day it was the best flan I’ve ever tried! The flavor of vanilla and caramel was delicious, and the texture was so silky smooth  I thought it would melt on my tongue. Ever since that flan, I’ve been trying to recreate it at home.

This recipe is as close to the real thing as I’ve ever got! It’s super simple (just four ingredients), and effortlessly delicious. The technique isn’t too hard, but it does take concentration and good timing to work with the sugar syrup before it hardens too much.

But trust me, the final result is worth the extra focus.

Watch Me Make This Flan!

This flan only has four ingredients — but there are still some tricks!

Follow along with my step-by-step photo tutorial here, or keep scrolling down for the full printable recipe card with measurements.

Steps 1-2: Start by making the caramel. Put the sugar into a saucepan and heat over medium-low, stirring frequently, until it turns into a golden brown syrup. In the meantime, place your ramekins on a baking tray and surround them with hot water (bain-marie).

Steps 3-6: Pour the caramel into the ramekins. Then make the custard. Start by cracking the eggs into a large mixing bowl. Add the sugar and beat until creamy.

Steps 7-10: Add the milk and vanilla and beat until well combined. Then pour into the ramekins.

Steps 11-12: Cover with foil and put in the oven. Bake for about 40 minutes (until just set — the size of your mold will affect the time). Then remove them from the water and let them come to room temperature. Finally, put them in the fridge overnight (or for at least 6 hours).

Steps 13-14: Finally, it’s time to eat your flan! Remove the foil and run a butter knife around the edge of the mold. Flip carefully onto a serving plate and enjoy!

If you love this flan recipe, don’t miss these other easy and delicious Spanish dessert recipes! 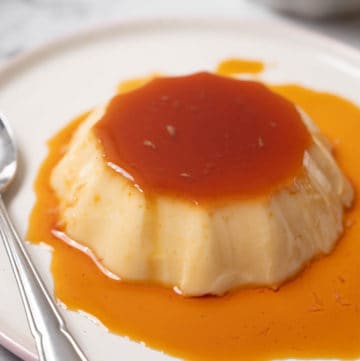 Update Notice: This post was originally published on May 15, 2020, and was republished with new text and photos on September 22, 2021.

Have you tried my authentic Spanish flan recipe? Let me know how it turned out in the comments below!