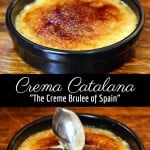 There is nothing better than ending a leisurely Spanish lunch with a Crema Catalana and a strong café solo. Never heard of this delicious Spanish dessert? Read on for its fascinating history and the authentic Crema Catalana recipe!

I was always afraid of making Crema Catalana for some reason. This quintessential Spanish dessert just seemed too complicated.

But it turns out that making homemade Crema Catalana could not be easier. Apart from having to wait for the custard to chill, there’s nothing difficult about it!

This Crema Catalana recipe is adapted from Claudia Roden’s The Food of Spain– one of my favorite Spanish cookbooks!

Despite which came first, they generally differ in that Crema Catalana is made with milk versus cream, and often incorporates lemon peel and cinnamon. It’s also not made using a bain-marie (a water bath, or baño maría in Spanish), which means it’s arguably much easier to make than its French cousin. And, I guarantee you, it is to die for when made well!

What I love about this traditional Crema Catalana recipe is that it has very few ingredients (you probably have them all on hand!) and is super simple to make. The hardest part is waiting for the custard to set. Here is my step-by-step tutorial (keep scrolling down for the full printable recipe card with exact quantities).

Steps 1-2: To begin, heat the milk along with the citrus peels and cinnamon stick until it comes to a slow boil. Dissolve the cornstarch in a splash of water.

Steps 3-4: Add the sugar to the egg yolks and whisk until pale yellow.

Steps 5-6: Add the cornstarch and a spoonful of the warm milk and keep whisking.

Steps 7-8: Next, remove the citrus peels and cinnamon stick from the milk. Then slowly whisk in the egg mixture. Whisk quickly so that the eggs don’t scramble!

Steps 9-10: Keep whisking the mixture over a low heat until thick like pudding. Your custard is done! Now pour it into your serving ramekins (I love using traditional clay dishes).

Steps 11-12: Cover each serving with plastic wrap (make sure it clings directly to the custard). Refrigerate for 4 hours (ideally overnight). Then unwrap, and sprinkle a layer of sugar on top.

Steps 13-14: Get out your blowtorch (or use a traditional iron rod like in Catalonia) and burn the sugar until caramelized. Some people prefer a darker crust, others lighter — it’s up to you!

And that’s it! It may seem like quite a few steps, but it comes together in less than 30 minutes! Like I said, the only difficult part is that four hour wait…

Serve alone or with fresh berries (and a strong café con leche of course!).

What’s the difference between crema catalana and creme brulee?

Both crema catalana and creme brulee are custards that are topped with sugar and caramelized. However, there are some key differences.

Crema Catalana is a Spanish dessert from the region of Catalonia. It is flavored with citrus peel (lemon and orange) and cinnamon. Creme brulee is a French dessert that is flavored with vanilla bean. Additionally, Crema Catalana uses whole milk in the recipe, while creme brulee is cream based. Lastly, crema catalana does not need to bake in the oven in a bain marie (water bath) as it is cooked on the stovetop, while creme brulee does.

It’s also interesting to note that crema catalana is one of Europe’s oldest desserts on record. It was mentioned in the famous medieval Catalan cookbook Llibre de Sent Soví (published in 1324!). References to creme brulee didn’t appear in print until centuries later, in the 1691 cookbook Cuisinier royal et bourgeois.

How can I caramelize crema catalana in the oven?

If you don’t have a blowtorch or a hot iron handy, you can caramelize the crema catalana in the oven. Put it under the broiler (the hottest possible top heat) until you see the sugar melting and crystalizing. Make sure your dish is oven safe for high temperatures and keep a close eye on it — it can burn in an instant! It might not get as caramelized as the other methods, but it will definitely work.

Crema Catalana is usually served as dessert, after a hearty lunch. Generally, you will drink a strong coffee alongside — either an espresso, cortado, or café con leche. You might also opt for a dessert wine, but remember, it should be even sweeter than the dessert! A Spanish Moscatel, Pedro Ximenez, or Cream sherry would do the trick! 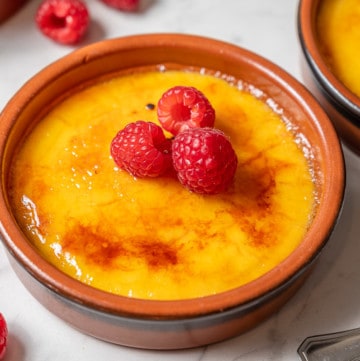 Update Notice: This post was originally published on January 25, 2016, and was updated with new text and photos on April 12, 2021.

That wasn’t so hard now, was it? If you try this Crema Catalana recipe, let me know what you think!