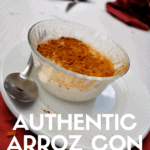 This creamy Spanish rice pudding recipe comes from my mother-in-law, Antonia. Her famous arroz con leche recipe is the perfect blend of cinnamon, sugar, and silky Spanish rice. You’ll try it once and be a fan for life!

I’ve said it before and I’ll say it again, I’m a lucky girl. My mother-in-law, Antonia, is a wonderful Spanish cook and has taught me so much of what I know about Spanish home cooking.

Her salmorejo recipe is one of my all-time favorite Spanish foods, and every time we’re together we try to cook something new.

The only downside to her cooking abilities has been the few times I’ve dared to “diet” in her presence.

It wasn’t even really a diet, just eating fewer carbs before my wedding! Every now and then I like to cut most carbs and sugar out of my diet (the month of December is not one of those times) as a way to cleanse my body.

Anyway, I’ve learned not to tell her this. At the mere mention of this locura she seems to make every possible thing I “can’t” eat and then shakes her head when I say “no, gracias.“

The last time I was eating healthy she bought me two enormous bars of chocolate and made her famous arroz con leche.

I nearly got angry with her because it feels like she’s not respecting or supporting my preferences… but then I realize that feeding people is just how she shows her love.

And I do love her rice pudding…

After watching her make this many times, I think there are a few key things to keep in mind:

You’ll need to buy Spanish bomba rice (or a similar round, short-grain rice), whole milk, sugar, cinnamon (ground and whole) and a pinch of salt along with some citrus peel gives great flavor.

Step 1: Cover the rice with either water (or for a more creamy version, with milk) and bring to a simmer along with the cinnamon stick and lemon rind.

Step 2: When the liquid is almost fully absorbed, add more milk to cover the rice again. Keep simmering and stirring, adding more milk every time the rice gets dry.

Step 3: When you’ve added almost the full liter, start to taste the rice. You want it fully cooked, but some people like it a little more firm than others. It’s a matter of preference.

Step 4: When it’s to your liking, take it off the heat. Add a pinch of salt, a dash of cinnamon, and add the sugar little by little until it’s the perfect sweetness for you. Enjoy your pudding warm or chill it in the fridge in small serving dishes for a couple of hours and eat it cold.

What does arroz con leche mean in Spanish?

It literally translates to rice with milk. It’s a common dessert that is enjoyed throughout all of Spain.

What rice is best for arroz con leche?

Bomba rice is the most common rice used for arroz con leche in Spain. It’s the same rice as paella rice — a short-grained rice that absorbs a lot of liquid. You can substitute Arborio rice.

Is arroz con leche from Spain?

Rice puddings are found throughout the world and many people think they may have originated in Asia. In Spain, the Moors brought rice and cinnamon to the Iberian Peninsula. Many Latin American countries also make versions of arroz con leche, often using sweet condensed milk instead of whole milk.

You can enjoy arroz con leche hot or cold, however in Spain it is most often served chilled for dessert.

If you love this traditional arroz con leche recipe, you must try these other classic Spanish desserts! 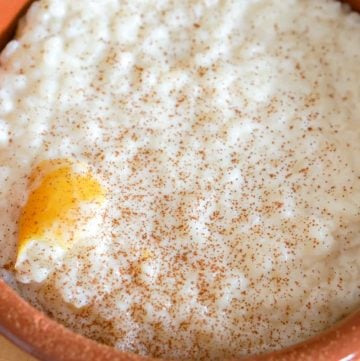 Update Notice: This recipe was originally published on December 16, 2011. It was republished with new photos and text on February 18, 2021.

Voila! Spanish arroz con leche a la Antonia! I promise that if you prepare this you will taste the love. Try it– and tell me how it turns out!