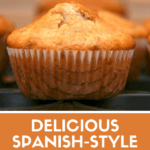 Spanish magdalenas are tall, fluffy, lemon-flavored Spanish muffins. They’re simple to make and perfect with a steaming hot cup of café con leche. Loved by adults and children alike — this authentic magdalenas recipe is a must-try!

Here in Spain, a quick and easy breakfast option is a magdalena, a homemade Spanish muffin (also called a cupcake) that’s baked with olive oil and some lemon zest. Every bakery has its signature magdalenas recipe, some adding orange zest or cacao for a change.

You can find homemade magdalenas in local bakeries, and plenty of prepackaged versions in the supermarket. But there’s nothing like a warm magdalena, fresh out of the oven!

This Spanish magdalenas recipe is the most traditional I’ve tried– I personally like using a fruity extra virgin olive oil to make them (such as arbequina), though you can substitute the oil of your choice.

I have to be honest– when I first tried a magdalena here in Spain, I was surprised at how simple these famous Spanish cupcakes are. Coming from the US I was craving some chocolate chips, or the sweetness of a ripe banana. But many years later, I now adore the simplicity of a good magdalena — and like anything, it’s well worth it to make them from scratch.

This magdalenas recipe is easy to whip up in a pinch. So try them, and enjoy!

Making Spanish muffins couldn’t be easier! In only about 10 minutes you’ll have the batter ready. After an hour in the fridge they’ll be ready to bake. And 15 minutes later, you’re in for a treat! Keep scrolling down for the full printable recipe card with exact measurements.

Steps 1-4: Start by beating the eggs and sugar together until the sugar is dissolved and the mixture becomes pale. In a separate bowl mix the flour, salt, and baking powder. Then add the dry ingredients to the wet ones, whisking until just combined.

Steps 5-8: When all of the flour mixture is incorporated, start adding the olive oil little by little, whisking throughout. Add the milk and lemon zest as well. Cover with plastic and put in the fridge for one hour. Then fill your muffin tins 3/4 of the way and add a sprinkle of sugar on top.

Are magdalenas from Spain?

Magdalenas are the Spanish version of muffins or cupcakes and originate in Spain. Some claim they’re based on French madeleines, but one key difference is that in Spain the recipe uses extra virgin olive oil, while the French cake uses butter.

In Spain, they are most commonly consumed for breakfast with a cup of coffee. In the past, these small treats were traditionally baked for holidays and birthdays, but nowadays they can be found throughout Spain, in supermarkets and bakeries. Some say that the name magdalenas is derived from a story about a young girl named Magdalena, who used to give these cakes to pilgrims who were going to Santiago de Compostela in Galicia.

What is the history of magdalenas?

The Spanish story says that there was a young woman named Magdalena who would bake these cakes and serve them to the pilgrims on the Camino de Santiago (the Way of St. James). This explains why they are so well-known all throughout Spain.

Watch Me Make It! (VIDEO)

I love eating my magdalenas with a hot cup of Spanish coffee. A café con leche never fails! If you want something even sweeter, go for a mug of Spanish hot chocolate. You can also host a sweet and savory snack time by combining these delicious Spanish cupcakes with a good homemade Spanish tortilla. Yum!

If you like the idea of these Spanish muffins, don’t miss my other Spanish cake recipes! 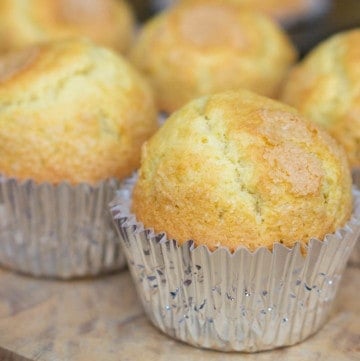 Update Notice: This post was originally published on January 30, 2018, and was republished with new text and photos on April 23, 2021.

What do you think? Remember– you can always add spices (such as cinnamon or even saffron), or try adding cacao or orange zest instead of the lemon zest– yum!

Will you be trying this Spanish magdalenas recipe anytime soon?