Already imagining my next Spanish road trip, Alejandro and I have decided it will almost certainly be a trip to Galicia, a land virtually unknown to the both of us. Technically we’ve both been, but neither of us spent enough time to actually enjoy the trip (or taste some of the amazing Galician seafood). So in anticipation of our journey north, I decided to call on one of my favorite Spain bloggers, Trevor Huxham, who writes A Texan in Spain. He is currently living in Galicia and eating his way through their impressive array of seafood, bite by bite.

Galicia—a green, rainy region in Spain’s northwest corner—is famous for serving arguably the best food in the country. Because Galicia enjoys almost 1,500 kilometers of coastline, seafood makes up a large part of the local diet; everything from fish to crabs to mussels are fair game in kitchens and restaurants up north.

Living here in the capital, Santiago de Compostela, has been a real learning experience for me, as I was born to two meat-and-potatoes-loving Midwesterners and grew up in Texas where barbecue beef is king. Even though I went to college in southern Arkansas, I never could quite get the hang of sucking out crawfish guts during Mardi Gras fish fries. In Santiago, however, I’ve come to appreciate all varieties of critters that call the beach and the sea their home.

Learning about the variety of mariscos (shellfish) that Galicia has to offer was sometimes confusing, as chalkboard menus advertised bizarre, foreign names that I had no English equivalent for. But having lived here for half a year and gotten the scoop from the teachers I work with, I’d like to share a dozen of the most essential crustaceans and mollusks Galicia has to offer.

No, this isn’t like those little fried calamari you get as an appetizer sometimes; pulpo á feira is adult octopus, tentacles and all, slow-boiled under tender. After the octopus is done cooking, Galicians snip the purple tentacles into little medallions with scissors, discarding the mantle or “head.” Garnished with extra-virgin olive oil, salt, and pimentón (smoked paprika), the white tentacle cross-sections are often served with boiled potatoes. The best place to try octopus is actually inland Lugo during its San Froilán town fair when half a dozen casetas or temporary tent-restaurants set up shop. Bodegón Os Concheiros, by the bus station, is my favorite pulpería (octopus restaurant) here in Santiago.

Percebes win the award for Weirdest Seafood in Spain: yes, they are indeed barnacles. But these barnacles attach themselves to dangerous, rocky cliffs that are battered by incoming tidal waves. Because of this, they’re extremely expensive, fetching prices between fifty and a hundred euros a kilo! They are, however, a beloved delicacy, especially at Christmas. To eat them, you cut off the leathery tube (the “goose neck”) with your front teeth just below the base of the beaky head. Discarding the tube, you chow down on the juicy insides that sometimes can taste like a blast of the tides. I don’t know if their addictive flavor justifies their outrageous price, but they’re worth trying at least once.

One of my personal favorites, the velvet crab is a real joy to eat because almost the entire crab is edible—the legs, pincers, and body are filled with flaky, savory meat. These nécoras are called “velvet” crabs in English because their carapaces are covered in tiny little hairs that feel remarkably like velvet. Upon being cooked, these blueish-gray crabs turn bright red and orange, making their striped triangular swimming legs really stand out. If you try any crustacean on this list, try nécoras!

Of all the seafood on this list, the spider crab is the only one I have yet to try, mainly because it’s so gargantuan in both size and price! The centollo’s central carapace resembles a rugged, ugly rock with thick, bony legs branching out of it that I’m sure house hefty flakes of delicious crab meat.

Not much to explain here, these tiny, striped shrimp are caught in the local rías or inlets of the Atlantic Ocean. They taste really great but because they’re so small it takes a lot of work to de-shell them.

Although the English name for cigalas includes the word “lobster,” these little orange guys really look more like jumbo shrimp with garden shears for fingers. Edward Scissorhands, anyone? Anyways, the edible tail meat and claw meat in Norway lobsters has a similar texture to shrimp but the flavor is really more like lobster meat.

Although (as in English) the Spanish word almeja can refer to the broad category of bivalved mollusks known as clams, when you seen them on menus and in markets it’s usually the grooved carpet shell species, a small clam with a sometimes spotted or speckled shell. Their bodies are wide and pale and are great with added flavors like butter, garlic, and herbs. Whenever the tide is low in the mornings on the way to my school, I often see workers collecting clams on the shores of the ría; they fill long mesh tubes full of clams and related species, like cockles below.

Berberechos are very similar to standard clams but you can distinguish them by radial ridges on their shells (almejas have concentric circles) and their heart-shaped silhouettes when viewed sideways. I personally can’t taste the difference between cockles and the clams above; cockles, however, do have smaller, rounder bodies with brighter orange “tongues.”

From the look of these navajas you’d never believe they belonged to the same grouping as the clams and cockles above; razor clams seem like scary Creatures of the Deep with their oozing, oblong bodies. However, pry them open and you’ll realize they’re just skinny, stretched-out bivalves like any other clam (but watch out; the shells are razor-sharp!). And when steamed or grilled, the razor clam meat will remind you a lot of other mollusk meat on this list.

One of the most affordable options on this list, your basic mussels are a mainstay of the local economy along the Rías Baixas or western coast of the region. Served fresh with lemon wedges as mejillones al vapor (steamed mussels) or canned in a paprika-spiced marinade called escabeche, these orange-bodied mollusks can sometimes be rubbery and definitely taste like “ocean” but their salty addictiveness means you’ll have no problem eating an entire platter on your own.

With their distinctive, fan-shaped shell, scallops are a symbol of the Camino de Santiago pilgrimage route that ends in the Galician capital of Santiago de Compostela. You’ll see yellow scallop shells directing your path all the way from the French border across northern Spain. People steam these bivalves in one half of their shell, either plain or with a mixture of onions, peppers, and breadcrumbs called vieiras gratinadas.

While the zamburiña species shares the same family as regular scallops above, they’re much smaller than the gigantic vieiras. The shells of these variegated scallops have oblong “ears” sticking out on one side that help them attach to rocks. Usually you will find them (deshelled) cooked in empanadas, thin and savory meat pies.

About the Author: Trevor Huxham teaches English at an elementary school in a small coastal village but calls the capital city of Santiago de Compostela home. Follow his stories and photos of life abroad and travels across Spain on his blog, A Texan in Spain, on Instagram, or on Twitter. 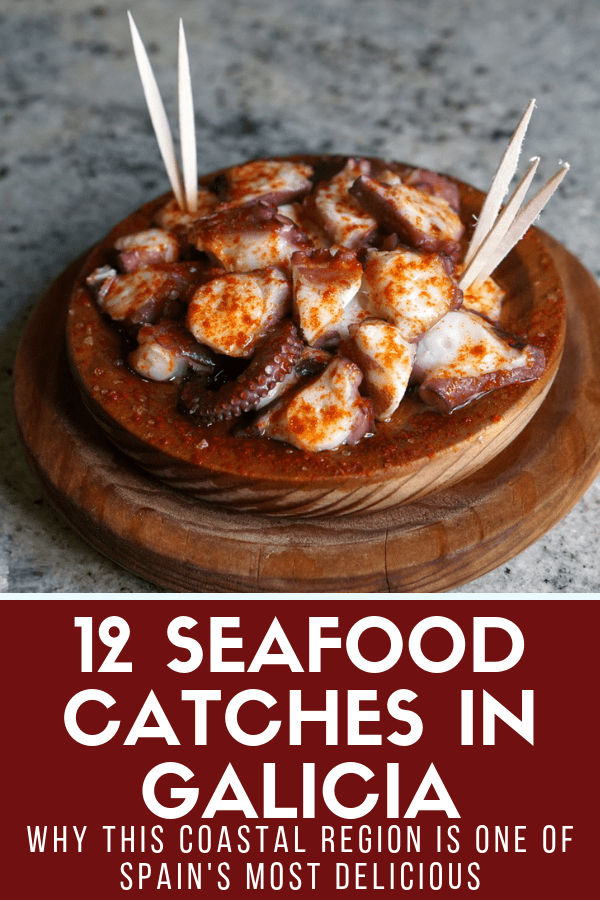