With more bars per capita than any other country in the world, Spain is definitely not lacking in eating options. In fact, the sheer number of bars and restaurants in Spain can sometimes be a bit overwhelming.

Which one should I choose? How can I know I’m picking a good one? What if my worst fears come true and I end up in a tourist trap where the food is sub-par and over-priced?

After years of careful study (aka a whole lot of trial and error), I’ve found some general guidelines that I follow when deciding whether or not to enter a new bar or restaurant in Spain.

Of course there are always exceptions to the norm… The best tortilla de patatas I’ve ever tasted comes from a spot that breaks the first guideline. And even the most rustic of bars have to sweep a few times a day, complicating the second guideline.

In general, though, this is how I make that game-time decision of whether to invest my meal in one spot over the next.

Rule 1: DOES NOT have photos of their food outside

It may be a great way to break down language barriers, but it’s also a sure-fire sign that the restaurant is catering specifically to out-of-towners.

This is especially true if the pictures are of paella! Many restaurants with banners of paella pictures order it frozen and just have to add water and microwave it. If you’re looking for authenticity, it’s almost always better to roll the dice at a place that lets the real food (or their reputation) speak for itself.

Rule 2: DOES have napkins on the floor

Who knew “dirty” could be such a good thing? At typical Spanish bars the dirtier the floor is, the better! It is quite common in Spain to toss the little waxy napkins on the floor when you’ve finished with them. The same goes for olive pits, snail shells and sausage casings.

The more crumpled napkins strewn across the floor near the bar, the more locals have been stopping in and they better the bar usually is. Careful with this rule though, as not all bars are throw-your-trash-on-the-floor type places. If it’s not a small bar and most people aren’t standing, keep those napkins and olive pits on the plate please.

Rule 3: DOES NOT serve paella or cocido every day

Paella, the Spanish rice dish served in a large, shallow pan, and cocido, the multi-course stew typical of Madrid and most of northern Spain, are not everyday meals. They take hours to prepare, often use rather expensive ingredients and are massive, intense meals that are often enjoyed over hours.

Therefore, restaurants that make a killer paella or a fantastic cocido only do it once or twice a week, and often on a Saturday or Sunday. Unless, of course, you’re at a restaurant dedicated specifically to cocido or paella, if they are serving either of these enormous meals every day, they probably aren’t cooking them fresh and homemade.

Rule 4: DOES fill up at the right times

Spain’s mealtimes are substantially later than just about anywhere else. Lunch restaurants start filling up around 2:00 p.m. and dinner spots usually start getting busy around 9:30 or 10:00 p.m. If the restaurant is busy at noon or at 7:00 p.m., steer clear! It’s almost surely not a spot where locals would go.

The exception to the rule is vermouth bars. On Saturdays and especially on Sundays in Spain, people pop down to their neighborhood vermouth bar for a drink around 1:00 p.m. before going for their big weekend lunch at 2:00 or 3:00. 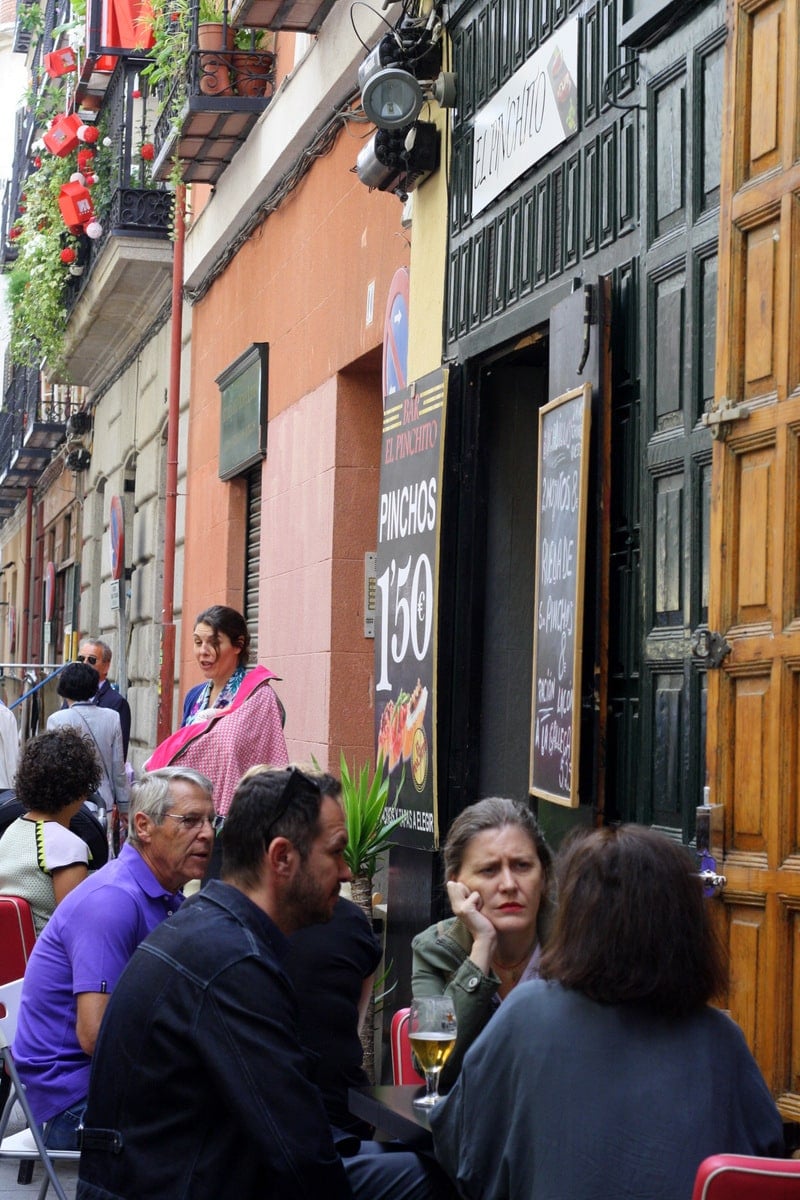 Rule 5: DOES NOT have a menu posted outside in four languages

Spanish restaurants are notoriously bad at translating menus. One of my favorite pastimes while waiting for a friend to arrive is to read through the English menu. “I crumbled and truffled mashed potatoes” read one menu. “Little pilgrin scallops” was an option on another. Both were at positively stellar restaurants.

I’ve found that often the worse the English translations are, the better the food is! Most restaurants in Spain will post a menu outside the door. If there is only a menu in Spanish, that’s usually a good sign. If the menu appears in four or five languages it’s a deal breaker for me.

Rule 6: DOES NOT say “Typical Spanish” or “Authentic Spanish Food” under the restaurant’s name

If they have to tell us they are “authentic,” they probably aren’t. When the restaurant is good, the food and the decor will tell you how authentic it is, not the sign on the door!

Rule 7: DOES NOT have a super long menu

Bars and restaurants in Spain tend to specialize in just a handful of items. Menus are short, ensuring that the dishes that do appear are there for a reason. It’s extremely rare to find a menu that mixes cuisines. Pasta and seafood and hamburgers and rice all at the same restaurant? Not in Spain.

I look for places where the food options fit on one, maybe two pages.  The wine list or cocktail menu, on the other hand, can (and should!) be much, much longer!

How do you choose a good restaurant?

See Also: How to Spot a Tourist at a Spanish Restaurant