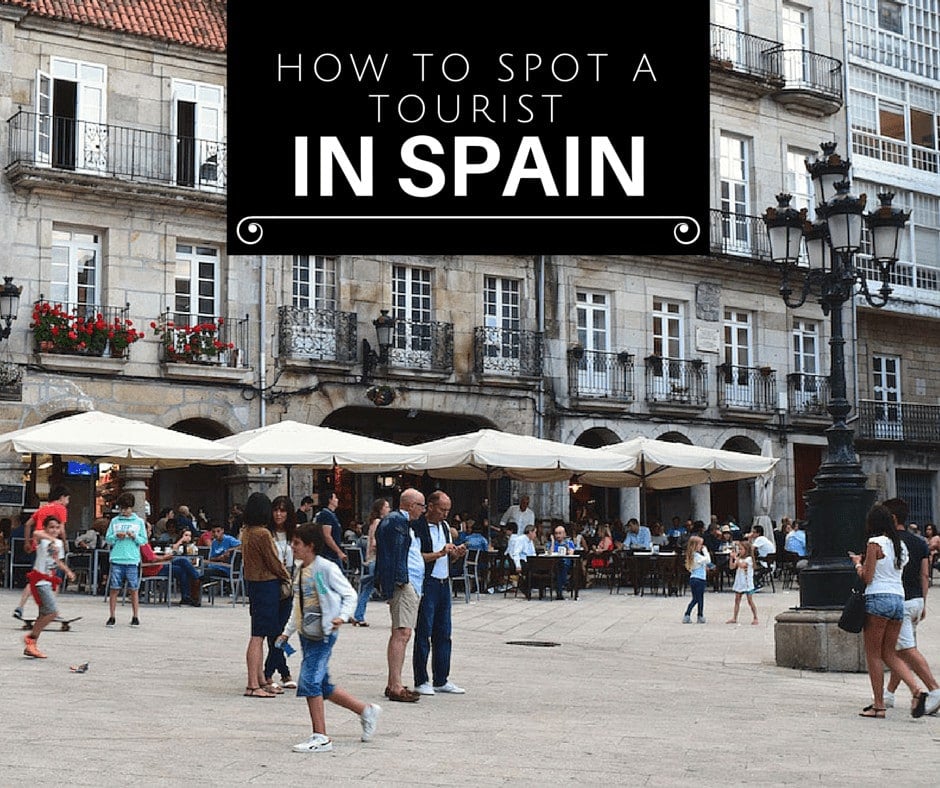 A tourist. It’s that thing we all hope never to be labeled. It’s a word that conjures images of Hawaiian shirts and fanny packs, awkwardness and social faux pas. It’s a label given to restaurants that are overpriced and unauthentic. It’s a haze that hangs over those parts of downtown that are packed with people yet void of locals.

In Spain there is a special word for North American and/or Northern European foreign visitors who haven’t quite figured out how things work here: guiri. While it is sometimes used as a friendly description, it is often tossed about disparagingly. The longer I live here and the more I understand the Odyssey-length scroll that is Spanish eating norms, the closer I get to shaking that guiri label.

There are few places in Spain where it’s easier to see exactly who is a tourist and who is a local than a Spanish restaurant. From what you are drinking to what time you are eating, some things just scream tourist!

Hawaiian shirts aside, here are a few sure-fire signs that you just might be a tourist in a Spanish restaurant…

You know you’re a tourist in a Spanish restuarant if:

1. You are drinking a pint (or bigger!) of beer

There are two rules to beer drinking in Spain: it better be cold and it better be small. In a country where temperatures easily stay over 100°F for much of the summer, cold beer is not just a refreshing beverage– it is a mode of survival!

The second rule is more of a strategy. As most bars will serve some sort of free tapa with each beer, the more beers you order the more free food you’ll get. Therefore by ordering two small cañas (about 200 ml or about 1 cup of beer) you can double the amount of free food you get!

Therefore it’s rare to see anyone drinking a full pint glass of beer. If they are, they’re probably a tourist (or maybe in a craft beer bar!).

2. You are dipping your bread in the olive oil

There are two things that are always present at a Spanish table: bread and olive oil. If this were Italy, that would mean the makings of  a pretty stellar appetizer. But in Spain the two items are relegated to very different parts of the meal.

The oil is there as a salad dressing. The bread is like an edible utensil, used to politely push food onto forks and to scrumptiously soak up any remaining sauces.

If you see someone shaking out their olive oil onto a plate and then sopping it up with their bread, they just might be a tourist.

3. You are eating paella for dinner

In Spain, there is a time and place for every food. The time for paella is NOT at dinner. This loaded rice dish is packed with meat and/or seafood and is thus quite a heavy meal. Seeing as Spanish dinner time is around 9:30 p.m., eating paella just a few hours before going to bed is, as any Spaniard will tell you, indigestion waiting to happen.

Instead, paella is savored over a long lunch giving you the whole evening to let all those carbs settle before hitting the hay.

4. You ordered a glass of water… twice

There are few things more basic and yet more difficult to get in Spain than a glass of water. Somehow Spaniards just don’t drink it very often and if they do, they usually order a bottle. So when you ask the extremely busy waiter to bring you a glass of water, there is about a 1 in 100 chance you’ll get it on the first try.

If someone asks for two glasses of water during the same meal, they are probably not from Spain.

5. You aren’t sharing your food

The playtime rule of sharing is caring is also the golden rule of Spanish eating. When a group of friends goes out for dinner they’ll order a bunch of large plates called raciónes and share them all.

Besides being an awesome way to try lots of different foods, it is also the only way to get a varied meal. The idea of a main dish and two sides all on the same plate is something akin to treason in the world of Spanish food. Keeping foods (and their corresponding sauces and flavors) separate is paramount.

Therefore, only one type of food typically goes on each plate (with the exception of a lunchtime main course, which is usually a protein with fried potatoes or salad). If someone orders just one plate and eats the whole thing themselves, they are probably a tourist.

6. You are eating lunch at noon

Noon in Spain is a food wasteland. An hour after the morning coffee break and two hours before lunch begins, most Spanish kitchens are closed at what is prime lunch hour in many other countries. That is, of course, unless it is touristy spot.

Many restaurants that cater specifically to foreign visitors start their lunch service early, long before the traditional 2 p.m. Spanish lunch hour rolls around. If you find yourself sitting at a restaurant table at noon, you just might be a tourist…

7. You tried to order “tempranillo” wine

Props for being up on Spanish grape varietals, but it won’t do you much good at the bar. As the majority of red wine served in the average Spanish bar or restaurant is made from the same grape (tempranillo), Spaniards order their wine by the region.

The top two red wine regions in Spain are La Rioja and Ribera del Duero (both of which are famous for their tempranillos). The exception to this order-by-the-region rule is white wines from Rias Baixas in Galicia, which are instead referred to by their grape: albariño.

8. You ask to take your leftovers to-go

To-go is a concept that is just starting to make headway in Spain. It has caught on with coffee and now many bakeries and bars offer coffee in small paper to-go cups.

But to-go boxes are virtually unheard of at restaurants. Portion sizes are smaller and plates are usually shared, meaning there is typically little if any food left over. If there is food left uneaten, the waiter is about a million times likely to ask if their was something wrong with your meal than they are to ask if you’d like a to-go box.

9. You are drinking sangria

Despite it’s international fame as Spain’s national beverage, sangria is actually a drink consumed almost entirely by non-Spaniards. While sangria’s origins are undoubtably Spanish, the wine-based beverage owes its worldwide fame to American cocktail connoisseurs, as Lauren explains here in her post on Traditional Spanish Sangria.

While you’ll find many locals sipping on sangria’s simple sister, the tinto de verano, a pitcher of fruit-filled sangria is usually a tell-tale sign that you are a tourist…

But if you must get your sangria fix, try this delicious sangria recipe!

The twenty percent rule that dominates American tipping culture is a positively foreign concept here in Spain. In fact, in many situations in Spain there is no need to tip at all! For checks under 10 euro per person, no tip is necessary (though it is appreciated). For pricier bills, I usually round up to the nearest euro or leave a euro coin or two.

If you leave a tip so large you can’t pay it in coins, you just might be a tourist (though one your waiter will really appreciate!).

What are some tell-tale signs of tourists where you live?