Spanish Ham: What You Need to Know About Jamón Serrano & Jamón Ibérico

If you had to pick just one food to eat for the rest of your life, what would it be? I know what I’d go for: Spanish ham.

In Spain, there’s nothing quite as important as ham. It’s bigger than religion, bigger than football, and goes beyond just a regular obsession. This isn’t just food, it’s life. Don’t believe me? Just ask a local! All you need to do is mention jamón ibérico to a Spaniard and you’ll see their eyes glaze over and their mouth salivate.

But what’s the big deal?

Locals might lose their minds for this stuff, but why? And what do you need to know before you get to Spain and start ordering your own ham at a bar? If you go to a restaurant you’ll see up to three or four kinds of Spanish ham on the menu, with prices ranging from five euros a kilo to over 100 euros a kilo! So what’s the difference, and is it worth it?

I’m going to try and answer all these questions (and more!). So let’s dive into the delicious world of Spanish ham, with this guide to all things jamón serrano and jamón ibérico.

The Best Ham in the World

There are few foods that are more Spanish than ham. Alongside gazpacho and paella, it might just be the country’s most iconic dish. Spanish ham (jamón) is the one food that all Spaniards, by default of just being Spanish, have to like. Whenever I’ve heard a foreigner say they don’t like jamón, the response of every single Spaniard has been, “well then you haven’t tried the good stuff!”.

Because for Spaniards, there’s no way that anyone couldn’t like ham!

The “good stuff” is jamón ibérico de bellota, a melt-in-your-mouth, otherworldly ham experience. This is one of the world’s most sought-after foods, and holds records for its headache-inducing prices. The world’s most expensive legs of ham are these Spanish beauties, going for $4,500 each.

But before you reach this ridiculously delicious (and very expensive) level of Spanish ham, there is a plethora of styles, breeds, cures, and colors to choose from. Let’s break them down.

What is Spanish Jamón?

Spanish ham is the best thing that can happen to the back leg of a pig. Rather than cooking the ham, you make jamón by dry-curing the leg. After slaughter, the legs are trimmed and cleaned, and then stacked in a barrel full of salt. They’re left for roughly two weeks to drain as much moisture as possible!

After that, the salt is wiped off and the legs are left to hang and cure. It’s carved off of the bone and served alongside other cured meats, sausages, and cheeses as an appetizer.

The Spanish tradition of ham making dates back more than 2,000 years to when the Roman Empire controlled most of the country. Even to the exotic palates of the Romans, Spanish ham was a delicacy. Pliny the Elder even praised jamón for its complexity, arguing that “the flesh of these hogs has nearly fifty flavors!”.

But for hundreds of years, cured ham legs were a specialty reserved only for royalty and clergy. It wasn’t until the 13th century that ham made its way to the everyman’s table. Today, the average Spaniard eats more than 7 pounds of cured ham per year!

But under that broad umbrella of jamón there is massive variation in price and quality, and a difference in the type of pig it comes from, too!

The most important variable when discussing Spanish ham is the breed of the pig. Because when it comes to Spanish ham, not all pigs are born equal.

Jamón serrano is the name of the most common type of Spanish ham. In fact, it makes up 93% of all ham production in Spain! You’ll see it in supermarkets, on bar menus, and eat it as a snack or on a sandwich. It’s simple and tasty, but it’s the least special kind of ham. If this is the only ham you eat while you’re in Spain, you’ve done yourself a disservice!

But while it may be considered the lower-level, everyday Spanish ham, quality (and price) can vary quite a bit.

So just what is jamón serrano, and why is it different from Iberian ham?

Serrano ham comes from pigs with the oh-so-inventive name of “white pigs”.

If you picture a pig, you’re picturing a cerdo blanco. These pink animals are a common sight throughout the world, and the breed is usually Landrace, Large White, Duroc, or Pietrain. They were purpose-bred for industry, suited for mass-production of pork.

You might be thinking, if the pig’s pink, why is it a “white pig”? Aside from being much paler than their Iberian cousins, the proof is in the hoof. These pigs have white or light brown hooves. Look for it the next time you’re in a Spanish bar! (The hoof is always kept on the leg at the bar! It’s the quickest way to tell the quality of the ham, so make sure to seek it out).

White pigs are almost always farmed intensively in enclosed pig houses and eat a grain-based pig feed. They normally live for no more than eight months, after which they weigh around 90-100 kilograms each. At it’s most commercial, the leg is cured for the bare minimum time, and is ready for sale no more than 12 months later.

Due to their breed, their conditions, and their diet, the fat is not integrated into the meat. You’ll see that serrano ham has broad strips of pink meat alongside strips of pure white fat, with no marbling. The fat content of the pig is around 25%.

While this more industrial ham is consequently not that special, you can still find different levels of quality.

Since 1990, the Consorcio Serrano (the official serrano ham regulators) have helped enforce standards of serrano ham. Today, you can find hams both with and without their official production guarantee. While producers don’t have to be approved by the regulator, there are some key differences you should be aware of.

Jamón Serrano (not guaranteed by the consorcio)

And even within these two classifications, there are three more sub-types of Serrano ham. Just as important as the consorcio, these labels are based on how long the ham has been cured. Bear in mind that the pig will still only have lived for eight months in an industrial setting, and been fed a grain- and cereal-based diet. 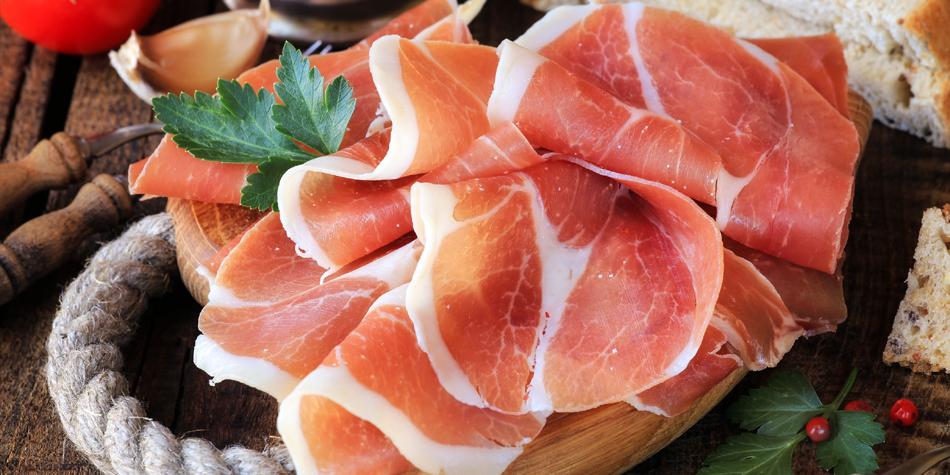 This is where the magic happens.

While it might only account for 7% of production, Iberian ham is the best kind of Spanish ham. It’s the stuff that makes Spaniards weak at the knees, and makes grown men weep with joy! While there are some reasonably-priced hams for around 100 euros, you’ll also see legs sold for over 1,000 euros at any good deli in the country.

So what makes this Spanish ham so special? It’s all in the pig.

If these meter-long, fat-covered pig legs look positively medieval, it’s because they are.

The best Spanish hams come from Iberian pigs, a dark-haired, black-footed ancient breed that is known for delectable marbled meat. You can pick out the Iberian hams at the market or at a restaurant by the color of the hoof, which is black. In fact, this hoof is so important that most locals just call Iberian ham “pata negra”—black-foot ham!

These pigs are native to the south of Spain and Portugal, where they’ve roamed for thousands of years. Phoenician traders brought the first pigs to the Iberian Peninsula, where they mated with local wild boars to produce the iconic Iberian Pig.

You can tell these pigs apart from cerdos blancos by their jet black skin and fur, their long ears and snouts, and by their iconic hooves. These pigs are also unique in their lifestyle. For the best ham, Iberian pigs form a crucial part of their local ecosystem.

To make the top-quality ham, some pigs get treated like royalty. Once they’ve reached 100 kilos in weight, the piggies freely roam the forest-filled pastures of the farm (called a dehesa), full of olive groves, acorn trees, chestnut trees, and wild herbs. The pigs help to fertilize the area, and the trees in turn provide them their food.

Aside from the wild herbs and grass of these pastures, the main food available to the pigs are acorns. During fall and winter, the pigs are let out to roam freely and gorge on acorns, eating up to 20 pounds of them each, per day! As a result, every pig gains about two pounds of weight for every day of this process.

The sweet, nutty flavor of the acorns permeates deep into the meat, giving it a subtle and unique taste. The pigs also absorb oleic fatty acid from the nuts, changing the biology of their body fat. Because of the health benefits associated with plant-based fats, this ham has even been proven to lower your body’s cholesterol!

But unfortunately, not all Iberian ham gets produced like this. So how can you tell the acorn-fed ham from the rest?

Jamón ibérico is broken into different quality categories based on the pigs’ diet, and the percentage of Iberian genes present in each pig. You’ll see this marked on the leg by a colored label tagged just above the hoof! They come in four colors; black, red, green, and white (in descending order of quality).

Where does Iberian Ham come from?

While you can make serrano ham anywhere in Spain, jamón ibérico is much more strict!

Just like Spanish wine and olive oil, Iberian ham is protected by the EU’s regime of Protected Denominations of Origin scheme. These appellations define where and how you can make the traditional foods of a country, to protect its heritage and standardize its quality.

Given that the taste of the land and dehesa is so important to the production of Iberian ham, the EU recognises four distinct appellations for acorn-fed jamón ibérico. They are:

How to Eat Spanish Ham

It would be blasphemy to suggest that great Spanish ham should be eaten any other way than thinly sliced (always by an expert, always by hand) and on its own. Carving ham is considered a skill in Spain, and maestros spend years training and practising. There’s even an annual festival of ham near Seville, including a national ham-slicing competition!

Jamón ibérico is usually served solo.  Don’t try and eat it on a sandwich or with cheese, as locals say you should only pair it with more ham! It’s a common appetizer, and the first course at banquets and at weddings.

And in terms of wine, jamón ibérico de bellota needs nothing more than an accompanying glass of Spanish red wine, or dry and nutty sherry!

Serrano ham, on the other hand, is different. Given that this ham isn’t quite as delicious as the Iberian stuff, you’ll see it on sandwiches throughout the country. It’s also a popular ingredient in many Spanish recipes. Here are a few of my favorites:

What is your favorite type of Spanish ham? Let me know in the comments below!