Today’s post comes from my friend Cassandra, a fellow expat in Madrid who blogs about Spain and travel at her website Gee Cassandra. She has been teaching in Spain for the past few years, and is more than familiar with some of the Spanish school systems’ strange customs and rules, however the school lunches at her most recent job still surprised her. I never worked at a school that served lunch, the kids always went home at 2:30 and ate with their families, but I have seen the lunch menus of former private students and was also surprised at some of the things children here eat— lots of fish and vegetables! Very different than my elementary school days, when chicken nuggets and PB&J were perfectly acceptable school meals. I’ll let Cassandra explain the rest!

At 2:30 p.m. it’s my turn to bajar al comedor—to go down to the school cafeteria for lunch. Last year, the public high school where I worked didn’t even have a cafeteria—the students left before 3 p.m., allowing them to make it home by Spanish lunchtime. This year, however, I work at a “concertado,” a semi-private school that receives funds from both the government as well as individual families. These schools have longer working days and therefore provide lunch for the students and staff. In the five months that I have been working in the concertado, there have been five especially curious meals: 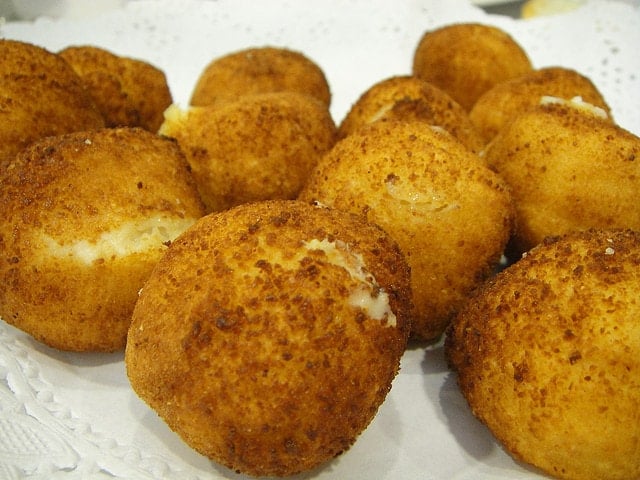 What it is: Fried eggs, but not the diner ones you are familiar with! These cafeteria eggs are hard-boiled, stuffed with tuna, then dipped in béchamel sauce and breadcrumbs before being fried. And that´s not all—they are also served with tomato sauce and potato chips. (They look like this.)

Why it’s unexpected: First of all, this is one labor-intensive dish, which is surprising for cafeteria fare anywhere. Second, what´s with the tomato sauce and potato chips—how do I go about eating this? 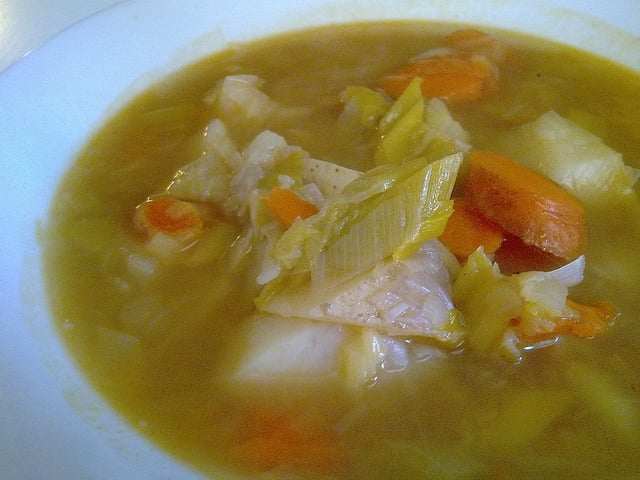 What it is: A soup made with leeks, fish, potatoes, and carrots

Why it’s unexpected: When told that purrusalda was the day’s lunch, I had no idea if it would be a meat, grain, or vegetable dish. Neither did my co-teachers. Later I learned that the dish—also sometimes written as porrusalda in Spanish—is of Basque origin and means leek soup. Considering conflicting sentiments towards this area of Northern Spain, I was surprised to see a Basque dish on the Madrid menu. 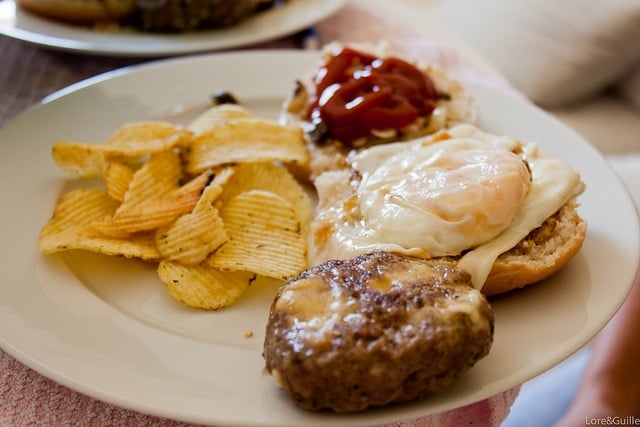 What it is: A meat patty served without a bun and with tomato sauce—not ketchup!—on top.

Why it’s unexpected: Since proud students, teachers, and staff never cease to remind this visiting American of how miraculous and wondrous their “Mediterranean Diet” is, I was surprised to find them embrace cafeteria burgers with gusto. However, these hamburgers aren’t what Americans typically think of when they hear the word—for starters, there is no bun! 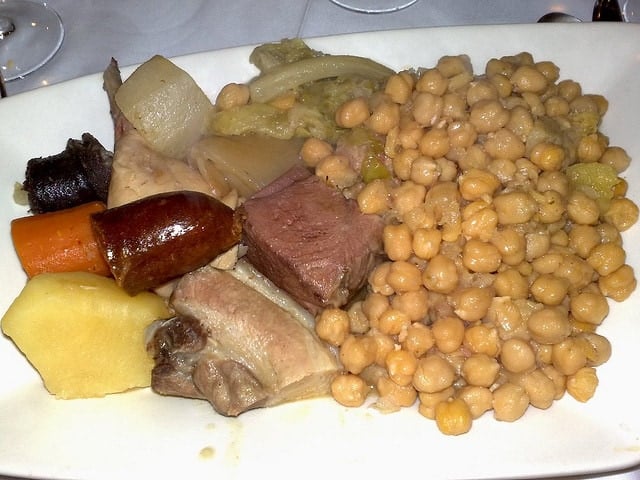 What it is: A soup cooked with a huge list of ingredients, then served with the individual bits taken out.

Why it’s unexpected: This soup is by far the most elaborate of all of the meals on this list. After ladling out a serving of noodle soup, you can choose from the following to add to your plate: pork fat, blood sausage, chorizo, ham, chicken, cabbage, green beans, carrots, chickpeas, and potatoes. Whew! Depending on how you have grown up eating cocido, you may mix the meat and vegetables back in to the soup or eat everything separately.

What it is: A square of pizza with tomato sauce, cheese, and mystery meat cubes

Why it’s unexpected: The school lunch pizza—in its recognizable square shape!—is simply mind-boggling in its universality. Despite other culinary differences, this is one meal both American and Spanish school kids can agree on.

Do you teach in Spain? What unexpected Spanish school lunches have you encountered?