Is there any country in the world that celebrates food as awesomely as Spain? Here the obsession with gastronomy goes far beyond the table, often pouring out into the streets and fields in all-out celebrations of all things edible and drinkable.

From world-famous harvest celebrations and massive food fights, to street-side sea creature gulping and ceremonial spice queen parades, Spain is the place to be for food festivals. Here are 6 food festivals in Spain that we definitely don’t want to miss this year! 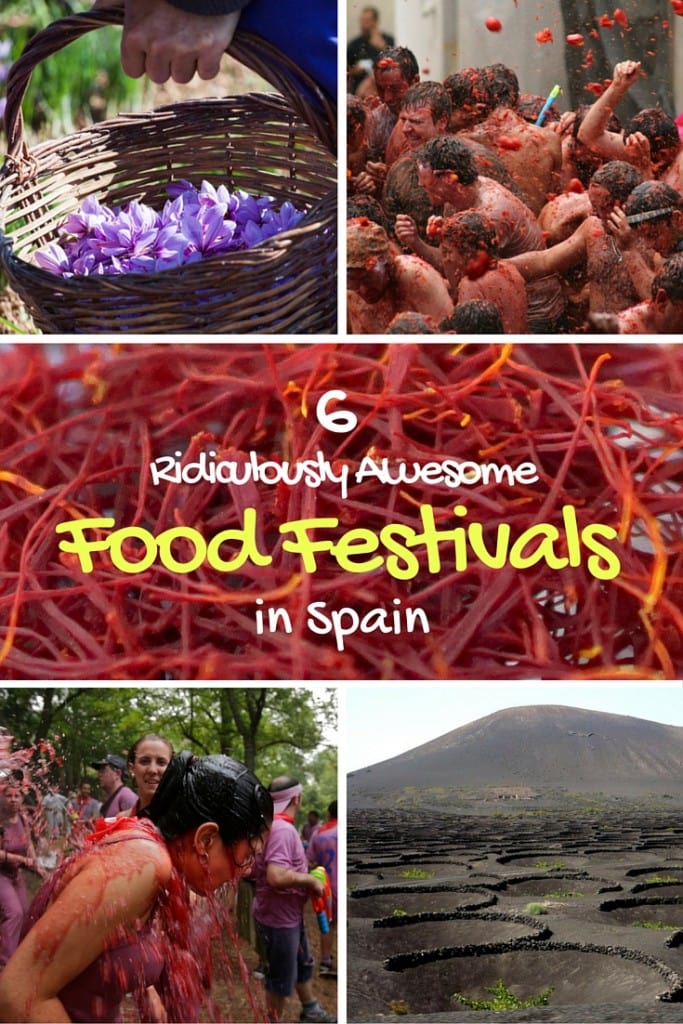 On the flat, windmill-speckled plains of La Mancha, the land of Don Quixote, lie some of the world’s largest saffron fields. On one fateful night in October the blankets of delicate crocus flowers bloom. The next day is a frenzy as nearly the entire village of Consuegra in the province of Toledo rushes to the fields to harvest the three red stigmas from each flower. These stigmas of saffron are worth their weight in gold.

After the furious day of harvesting is over, the village celebrates. The Fiesta de la Rosa del Azafrán, aka the Saffron Rose Festival, is a tribute to Manchego traditions with typical dances, spice queen parades, local foods and, of course, saffron picking contests!

When: Last weekend of October

Where: This celebration takes place in the village of Consuegra in the province of Toledo, about an hour and a half south of Madrid by car. There are a few beautifully rustic places to stay in Consuegra while attending the festival, or you can stay in the nearby medieval provential captial of Toledo.

While the volcanic island of Lanzarote may belong to the Spanish, it is much closer to the Sahara Desert than the coast of Cadiz. Being so far south, Lanzarote is the first European wine region to kick of the grape harvest. The spectacle is celebrated as all vendemias on volcanic islands should be: with camels, barefoot grape crushing, barbecue and plenty of folk dancing!

When: La Geria’s Feria de la Vendemia is usually the second week of August, but depends on when the harvest falls.

Where: The La Geria winery, about 20 km from the island’s capital city Arrecife, hosts the festival. The closest city is the beach resort town of Puerto del Carmen, about 10 km away.

Learn more about Lanzarote and its bizarre vineyards:

No one throws a water fight quite like the Andalusian village of Lanjarón. At midnight on June 23rd, the day of Saint John the Baptist, the village erupts into a no-holds-barred fight to drench every citizen, tourist or passer-by with the natural spring water that pours abundantly through the village´s many spigots and fountains.

After an hour, the buckets lie empty, the hoses are turned off, the water guns are racked in their holsters and the city is sufficiently soaked. People then turn to another loved liquid: beer. And in one of Spain’s top cured ham producing regions, the obvious accompaniment to said beverage is slice after slice of spectacular Spanish jamón.

See also: All About Spanish Ham

Where: The village of Lanjarón is 45 km from Granada in the southern region of Andalusia. While there are a few hotels and hostels in Lanjarón, most hike prices during the festival and sell out months in advance. Another option is to stay in Granada and catch a bus to Lanjarón for the festival.

To start of one of the biggest Carnival parties in Spain is a three day event. And I’m just taking about the kick-off celebration! On the first day of Cadiz’s Carnival opening ceremonies, residents flood the streets to share free pestiños (anise-flavored fried pastries). The third day they gulp down 500 kilos of oysters (and more than 2 million liters of beer!).

But it’s the second day of Cadiz’s Carnaval kick-off that puts it on our list: the Erizada. Starting at midday, fisherman crack open kilo after kilo of black, spiny sea urchins. The alien-like creatures are served raw and free to the thousands of revelers gathered in Cadiz’s La Viña neighborhood. By the end of the night, Gaditanos (as people from Cadiz are called) slurp down upwards of 650 kilos of sea urchins.

When: Usually the weekend after Three Kings Day in early January

Where: The bulk of the celebrations take place in the La Viña neighborhood of Cadiz. There are copious options for hotels, hostels, beach resorts and guest houses in this seaside town, or, if you prefer a big city, Seville is about 120 km north.

Super soakers, back-mounted sprayers, buckets and paintbrushes are all fair game in the raucous wine battle in Haro, La Rioja, Spain. This cozy winemaking town turns into a battlefield every year on the day of St. Peter as purple people (dyed that color from being doused in wine) do their darnedest to soak each other in as much wine as possible.

The festivities get started the night of June 28th as the entire village (and a few thousand tourists) overtake the town, indulging in copa after copa of the region’s famous vino tinto. The celebrations go on all night until at 7 a.m. the revelers start the trek up a 5 km hill to the sight of the wine battle. When the trucks full of wine arrive, the battle begins!

Where: The Batalla del Vino takes place in Haro, a winemaking village in the La Rioja wine region. There are a few hotels in Haro, but many people stay in the neighboring city of Logroño, about a 45 minute bus ride away. Logroño is a 3.5-hour drive from Madrid and a 4.5-hour drive from Barcelona.

The Tomatina is perhaps the most famous food fight in the world. Each year upwards of 40,000 revelers pack the streets of the Valencian village of Buñol to hurl more than 100 tonnes of tomatoes at each other. This giant tomato fight has been dying the streets of the city bright red for 64 years in celebration of the town’s patron saint, Saint Luis Beltrán.

Because Tomatina has taken on such international fame, you now have to buy tickets in advance to participate.

When: Last Wednesday of August

Where: Tomatina takes place in the village of Buñol, about 40 km from Valencia and a 3.5- hour drive from Barcelona. Many tour companies run buses from Valencia or Barcelona to Buñol for the festival as there are very few places to stay in this small town.

Are there any awesome Spanish food festivals we are missing? Let us know in the comments! We may just have to do a Food Festivals in Spain Part II! 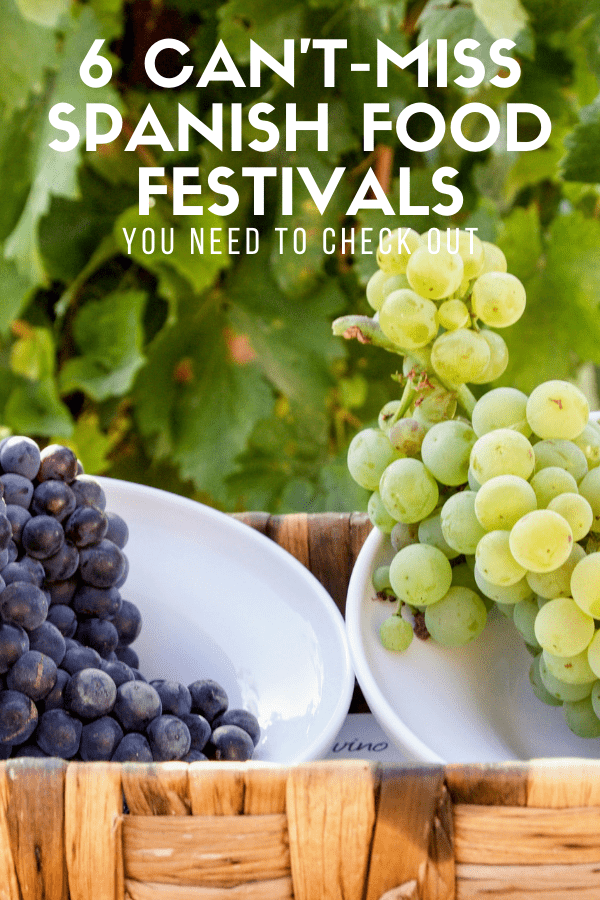