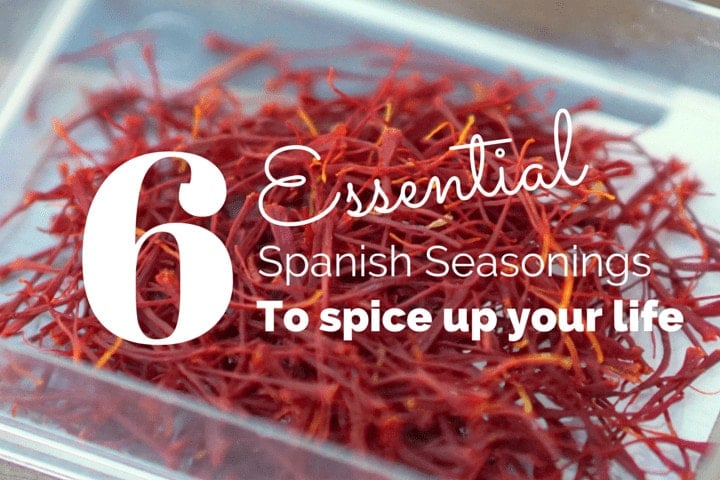 If Spanish cooking has one rule it’s simplicity. Ingredient lists for Spanish recipes tend to have only a handful of items, but the flavors are anything but basic. By using the freshest possible produce, meats and cheeses along with one or two spices or seasonings, Spanish cuisine lets the raw ingredients shine.

As such, there are a select few decidedly Spanish spices and seasonings that are essential to Spanish cuisine. Here are the six Spanish seasonings that put that umph in many of Spain’s most popular (and most delicious) dishes. No Spanish kitchen would be complete without them!

Front and center of any Spanish cabinet is salt. Salt is so paramount to Spanish cuisine that there is a commonly used word in Spanish for food that has too little of it, “sosa” which means bland. You would be hard-pressed to find a Spanish recipe that does not have salt in it. And often times, take tortilla española for example, it is the only seasoning sprinkled into the dish.

Beyond its flavor-enhancing properties, salt is also crucial for Spain’s hugely popular cured meats and fish.

After the matanza, the traditional pig slaughter, many cuts of pork are cured in salt. Salt (along with a thick layer of lard) is also the key ingredient to making the deliciousness that is Spanish ham.

Salted cod is another of Spain’s star dishes. Large filets of the fish are preserved in a thick layer of salt. The fish is then rehydrated and made into a huge variety of scrumptious dishes like these salt cod croquettes.

Spain is home to many salt mines, where some of the best sea salt in Europe is produced. Some of the production areas include the Delta Ebro, the province of Cadiz, and the island of Mallorca, and some are even producing the labor intensive and exclusive flor de sal, a true delicacy.

Spanish paprika, or pimentón, is the rockstar of Spanish food. Bright red, often smokey and sometimes spicy, paprika is what makes chorizo red, what makes bravas sauce spicy and what gives Galician octopus its characteristic tinge of smokiness.

Paprika has been part of Spain’s go-to trifecta of flavor (which also includes olive oil and garlic) for centuries. It is made from a variety of ground-up peppers, some of which Columbus brought to Spain from the Americas in the 15th century.

Three of the most typical regions that produce Spanish paprika are:

One of Spain’s most characteristic spices (though perhaps wrongfully so) is also one of the world’s most expensive. For that reason it has been nicknamed “oro rojo,” red gold. Cultivating saffron is an extremely delicate process. It comes from the small, purple Crocus flower. Each flower has three bright red stigmas of saffron that must be hand-plucked from the petals.

Azafrán is vital to achieving the perfect paella, one of Spain’s most well-known dishes. It gives the rice its characteristic orange-yellow color and adds that extra pizazz of flavor.

That said, saffron is not necessarily a staple in today’s Spanish kitchen. Its high price makes many opt for cheap colorante (food coloring powder) to color their food. Others use ground ñora pepper, a better alternative to food coloring by far, yet a very different flavor.

If you do splurge on a case of real Spanish saffron, make sure the threads are bright red (and not orange or worse yet, yellow) and if it’s too cheap it’s probably not worth buying. To use, soak in warm water/stock/wine for about 30 minutes, and then add the liquid to your dish. Many make the mistake of just throwing a few threads into a dish, but saffron needs time to infuse its flavor into a liquid.

Parsley in Spain is far more than a garnish. Spanish parsley and grilled fish go together like peanut butter and jelly. Thin filets of everything from hake to monkfish (two very popular white fish in Spain) often come drizzled with a bit of olive oil, garlic and finely chopped parsley.

In the Canary Islands, the famous mojo verde sauce is made from parsley. This fresh sauce is most commonly drizzled over wrinkled salty potatoes, although I couldn’t help but drench everything on my plate with it!

Spanish food is definitely not known for its spice. Very few foods in Spain can be considered even mildly spicy. The one exception to that is guindilla, a dried red cayenne chili usually about a centimeter long.

These fiery little guys are most commonly used to add a bit of a kick to fish and seafood. One of my favorite dishes with guindilla is gulas, imitation baby eels pan seared with olive oil, garlic and cayenne peppers. It’s also essential in any great plate of gambas al ajillo (sizzling shrimp with garlic).

Who knew an average looking leaf could be the source of so much flavor! Whether it’s a beef stew or a bowl of lentils, bay leaves add that extra punch of goodness to Spain’s hearty dishes.

The leaves are usually sold dried and whole. They are tossed as-is into many of the slowly cooked broths, soups and stews that dominate northern Spanish cooking.

What is your favorite Spanish seasoning?

See these spices in action in these recipes: