There’s nothing more satisfying than an easy chicken recipe to spice up your week! These traditional Spanish chicken recipes are quick and delicious, freeze well, and reheat even better. In true Spanish fashion, they are made with only a few simple ingredients—the fresher the better.

Whether you want to roast, bake, stew, or fry, few things are as tasty as the humble chicken. It takes on flavor so well, especially the earthy and tangy Spanish tastes of smoked paprika, tomato, mushrooms, and even some meaty chorizo. It’s also a great source of lean protein!  Even better, compared to other meats, it’s pretty quick to prepare. And if that’s not enough to convince you, then the flavor of these recipes definitely will.

The best thing about these chicken recipes is how versatile they are. Most of them fit every season of the year; they’re hearty without being too rich. They also don’t need any super hard-to-find ingredients that you’re not likely to have in the pantry at home. And if you don’t happen to have absolutely everything that you need, then you can usually substitute it for something else.

Best of all, you can serve these Spanish chicken recipes with anything you like! You can add a fresh garden salad, rice, or some tasty roasted potatoes.

It might sound strange, but roast chicken is a summer staple for Spanish families. Whereas I’m more used to roast chicken being a fall and winter recipe, Spaniards often have their pollo asado for lunch after a long morning at the beach.

Alicante is a super popular beach city for Spaniards seeking a respite from the summer sun. It’s also famous for chicken! This is my go-to recipe for summer-style pollo asado (called Pollastre Alicantí locally). It’s perfectly juicy, tender, and oh-so-tasty.

This is the style of roast chicken that you’ll see being sold at the traditional pollerías all over Spain, particularly in hubs like Madrid.

Get my recipe: You can see my Alicante-style roast chicken recipe here.

2. Spanish Chicken and Rice with Chorizo

My favorite type of midweek meal is one that only needs one pan! I love cooking, but I do not love doing the dishes. So when I can make a delicious meal with minimal washing up, I know I’ve found a perfect recipe.

This recipe for Spanish chicken and rice with chorizo is one of those magical one-pan wonders. Not only is it easy to prepare, but by cooking the rice together with the chorizo, chicken, wine, and spices, it soaks up all of the flavors. In classic Spanish fashion, that makes the rice the star of the dish, not just the stuff on the side.

Get my recipe: Let my Spanish chicken and rice recipe spice up your next quick dinner.

This is one of those rare Spanish dishes without any of the ingredients you might think of as typically Spanish. There’s no tomato, potato, peppers, pork, or paprika!

One of the reasons for this is the recipe’s Arabic origins. The ingredients are like a Moorish dream shopping list! In place of those Spanish classics (most of which come from the Americas, post-colonization, FYI), you’ll find Middle Eastern ingredients like almonds, saffron, cinnamon, and bay leaves. The oldest version of this recipe even includes chicken offal, cloves, nutmeg, and ginger, too!

Luckily, there’s no offal in my recipe for chicken in almond sauce. All you need are chicken thighs, almonds, and a few delicious threads of saffron plus a handful of kitchen staples. Even better, the wonderfully glossy sauce in this recipe doesn’t need any cream! The richness of the dish instead comes from the combo of almonds, eggs, and olive oil.

Most people fall in love with this dish at their local tapas bar, where it often forms part of a menú del día—that icon of Spanish lunch. It’s one of the things I love most about Spain, a cheap, quick, and tasty 2-3 course lunch offered at almost every tavern in the country, Monday-Friday!

Get my recipe: Spanish chicken in almond sauce

After all these Spanish chicken recipes, it might surprise you to believe that you won’t find much chicken served in Spanish bars and restaurants! Go to a traditional tapas bar and you’re more likely to find pork done a thousand different ways, along with some seafood and lamb. Chicken, however, is suspiciously absent.

That’s because chicken is more often eaten at home. It’s a lunchtime staple in Spanish households (which is why it pops up more often on the lunchtime menú del día than anywhere else).

And of all the Spanish lunchtime chicken recipes, this pollo con tomate (chicken with tomato sauce) is one of my personal favorites! It’s an absolute classic, made with simple ingredients found in most at-home pantries. It’s also another one of those one-pan wonders, and you can have the whole thing ready in less than an hour with minimal washing up required. Try it for your lunch and you won’t be disappointed!

Get my recipe: Try my favorite Spanish chicken with tomato sauce recipe here

It might sound a little ambiguous, but pollo en salsa (“chicken in sauce”) is one of my favorite Spanish chicken recipes! The less-than-descriptive name just comes from the dishes ubiquity in Spanish cooking; the ingredients are so common that you don’t need to describe them.

And it’s the sauce that really makes this dish so special. It’s a blend of olive oil, sauteed garlic, chicken stock, and white wine; and even more delicious than the sum of its parts. While you will need an immersion blender to properly emulsify the sauce, the rest of the dish is prepared in the same pan. Because the recipe calls for chicken breasts, it’s also quite quick and easy to prepare.

Serve your own “chicken in sauce” with fried potatoes, a fresh salad, or even pasta!

Get my recipe: This is Antonia’s famous chicken in wine and garlic sauce — it never disappoints!

“Milanese” chicken might not sound quintessentially Spanish, but it’s the favorite lunchtime dish of children (and adults!) throughout the country. It’s a recipe you will see in home kitchens all around Spain, beloved for its simplicity and big flavors.

To prepare chicken milanesa, take thin fillets of chicken breast, coat them in breadcrumbs, and fry them in a skillet. That’s it! Alongside potatoes, rice, or pasta, it’s a hearty and filling lunchtime dish. (Most Spanish school kids come home for lunch, and they come hungry). All in all, you can have this dish on the table in less than 30 minutes—that’s a winner in my books!

Its Italian name comes from the dish’s origins in northern Italy, where restaurants in Milan often prepare fillets of veal in a similar way. Given the use of breadcrumbs in the recipe, you might also come across chicken milanesa instead named pollo empanado.

Get my recipe: Try this delicious and easy chicken milanesa recipe

Most European or Latin chicken and mushroom recipes call for a pretty guilt-inducing amount of cream. Don’t get me wrong, they’re delicious, but they’re just a bit too heavy to satisfy my midweek cravings for fresh, healthy recipes. Luckily, this Spanish chicken and mushroom dish is as healthy as it is delicious! (With no added cream!).

Even better, it’s another one of those one-pot wonders. The mushrooms, chicken, and the sauce are all prepared together in the same pan. This means that not only do you get minimal washing up, but the flavors get concentrated as the dish comes together! To make this version of pollo con setas, you’ll need the typical Spanish ingredients of smoky paprika, garlic, and if possible, a dry sherry wine like Fino or Manzanilla.

Enjoy this dish by itself, or with some brown rice or mashed potatoes.

Get my recipe: Here is my go-to Spanish chicken and mushrooms recipe – let me know what you think!

Do you have a favorite easy Spanish chicken recipe? Let me know what it is in the comments below. I’m always on the lookout for new recipes to try at home, especially if they involve chicken! 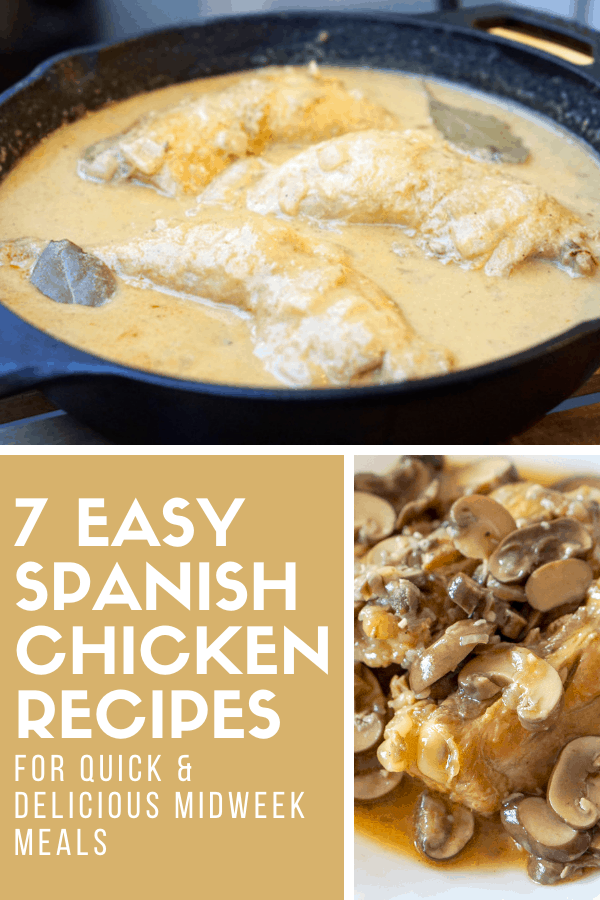