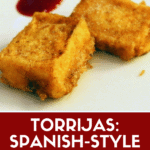 This popular Spanish torrijas recipe is a family favorite! A cross between french toast and bread pudding, it’s a simple Spanish dessert that has gotten me my fair share of compliments over the years. There are as many torrijas recipes as people in Spain, but this one is a keeper.

I first heard about torrijas from a student I was teaching during my first year in Spain.

He was a professional chef, and he taught me a lot about Spanish cuisine that year. I asked him about Spanish Easter traditions and he told me about some traditional Easter sweets.

When I heard him describe torrijas as a sort of Spanish French toast covered with honey, I was intrigued. It sounded so good!

I soon learned that torrijas are actually made in a variety of different ways. I’d call them more of a cross between French toast and bread pudding.

Steps 1 & 2: You always start with day-old bread that is slightly stale. Then it’s usually soaked in a liquid — I like to soak it in milk infused with spices. Some people use sweet red wine or sweet sherry, others use milk, and some add different liquors.

Steps 2 & 3: Next, it is battered in beaten egg and fried in olive oil until browned.

Steps 5 & 6: Once browned, rest the torrijas on paper towels to absorb extra oil.

Steps 7 & 8: Finally, torrijas are often topped with cinnamon and sugar, though others are covered in sweet syrup, like honey or simple syrup. Some are even dipped in chocolate (not traditional, but delicious).

Obviously, I started sampling torrijas as soon as possible. In Seville, most of the versions that I tried were thick and sweet, slightly eggy, covered in honey, and always served cold. They were a delicious treat I would enjoy with my afternoon coffee.

Here in Madrid, I’ve also tried different torrijas recipes each Easter season, one made with a bit of sweet red wine and another covered with milk and cinnamon. Both were delicious.

The following is a torrijas recipe I came across on a Spanish recipe blog I often read: Mercado Calabajío. The torrijas come out perfectly every time. I took their suggestion and used some cardamom seeds, which really add something special.

Whether or not you would consider torrijas a Spanish version of French toast isn’t important—these are a delicious snack or dessert either way!

Like this recipe? Sign up for my free weekly newsletter and receive a new Spanish recipe once a week! Join today and get my FREE Spanish ingredient essentials guide! 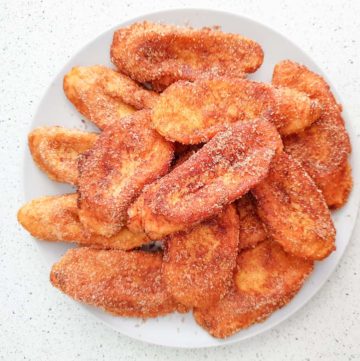 Update Notice: This recipe was originally published on March 31, 2012 and was republished with new photos and text on February 15, 2021.

So what do you think—are torrijas a Spanish-style French toast or something completely different? If you’ve tried a torrijas recipe, do you prefer them with milk, wine, or honey?