New Year’s Eve, or nochevieja in Spanish, falls smack dab in the middle of a nearly nonstop stretch of Spanish festivities that lasts from Christmas Eve until Three Kings’ Day on January 6. And considering that it’s the third-largest city in Spain, there’s tons to do on New Year’s Eve in Valencia. Take advantage of the not-too-chilly temperatures and ring in the new year valenciano style.

How to Celebrate New Year’s Eve in Valencia

The countdown (and fireworks!)

On the night of December 31, valencianos and visitors alike pack into the Plaza del Ayuntamiento right outside the city hall for the city’s official New Year’s countdown. The picturesque plaza becomes party central, complete with DJ performances and fireworks. This is the place to be for celebrating New Year’s Eve in Valencia, so show up early to snag your spot.

No, the local aren’t suddenly acting on their New Year’s resolutions to eat healthier right at the stroke of midnight. Those 12 grapes (las uvas) you see everyone cramming into their mouths are a fun (and slightly challenging) Spanish tradition! Spaniards eat one grape for each chime of the clock as it hits midnight and the new year officially begins. Legend says that if you can eat all 12, you’ll have good luck in the new year!

Sip on some bubbly…cava, that is!

It wouldn’t be New Year’s Eve in Valencia without cava, champagne’s lesser-known Spanish cousin. This sparkling white wine usually comes from the region of Catalonia, just north of Valencia, and provides a crisp and refreshing touch to any celebration.

After the stroke of midnight, many valencianos head to their favorite bars and discotecas to continue the fiesta. One of the city’s many spectacular rooftop bars makes for a great place to start the new year off in style.

Want to really celebrate like a local? Head to the Patraix neighborhood, where residents organize a huge local block party in the barrio‘s eponymous plaza each year on nochevieja. It’s been a favorite way to celebrate New Year’s Eve in Valencia for more than 20 years.

Looking for something a little more on the elegant side? Many hotels offer special gala dinners on New Year’s Eve in Valencia. These events usually also feature a cotillion, orchestra performances, an open bar and of course the midnight grapes!

As the sun rises to illuminate the first day of 2018, the irresistible smell of fried dough wafts out of churrerías all over the city. Churros con chocolate are the quintessential Spanish snack and a must-eat after celebrating New Year’s Eve in Valencia. From the crispy churros themselves to the piping hot and sinfully delicious chocolate, it’s the perfect way to start off the new year.

See Also: How to Enjoy Winter in Valencia 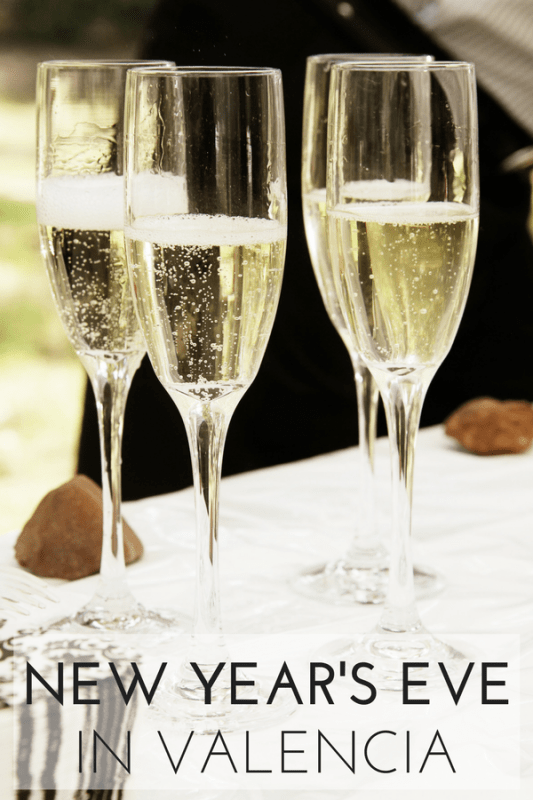