×
Home / Blog / Granada / 5 Hidden Gems: Where to Get Off the Beaten Path in Granada

Many travelers visit Granada for its staggering beauty and must-see sights, but despite the influx of visitors, the city’s streets still retain their characteristic mystery and intrigue. The best way to really get a feel for the city is to spend some time wandering its streets in search of their hidden treasures. It’s time to go beyond the Alhambra: these off-the-beaten-path gems in Granada are all within walking distance of the city center!

What to Explore Off the Beaten Path in Granada

This particular street is a perfect escape from the tourist traps of the center, and the only people you’re likely to bump into are the odd dog walker or local granadino out for a stroll. On the final curve of the hill before the path begins its descent, you can enjoy one of the finest views in the city. The panorama of the Albayzín district is a stunning sight: enjoy the sprawl of white-washed houses against the backdrop of a crystal blue sky. It’s a bit steep, but well worth the climb!

Just 15 minutes from the cathedral, this park is in the more modern part of the town in an area most tourists simply don’t know exists—which makes that the perfect reason to go. Stray off the beaten path in Granada, and you’re bound to find some hidden treasures, like this stunning park set in the grounds of Spanish poet Federico García Lorca’s former family home. It’s the perfect spot for an afternoon of sun and relaxation away from the city center. Wander through one of Europe’s biggest and most beautiful rose gardens, or simply grab an ice cream, relax and watch the world go by.

In a place where beauty is so plentiful at every turn, particularly in terms of architecture, the San Jerónimo monastery is often overlooked, which is a crying shame. Built in the 16th century by the Catholic Monarchs, Ferdinand and Isabella, this spectacular site consists of both monastery and a church. Additionally, the cloisters are set around a serene central courtyard, while the buildings are a fine example of Renaissance architecture. Don’t miss the stunning golden altarpiece, which gives the interior of Granada’s cathedral a real run for its money.

You’ve probably heard of the Alhambra Palace, but do you know what hidden gem you can find within the palace’s original confines? La Silla del Moro, a former lookout point, offers some of the best views in the city. This concealed beauty is one of the best spots to contemplate the palace’s magic under the rays of a setting sun. Skip the crowded Mirador de San Nicolás and head to this hidden spot instead.

Finally, after wandering the city’s streets and admiring its breathtaking landscapes and architecture, you’ll likely need a good drink. That’s where this bar comes in. Because this gem is so hidden, you could actually walk by it without realizing it exist. Trastienda means the back room of a shop, which is how this bar started—as a shop! The owner started serving ham and wine to his customers waiting in line, and nowadays provides fantastic tapas, a warm welcome and traditional surroundings. 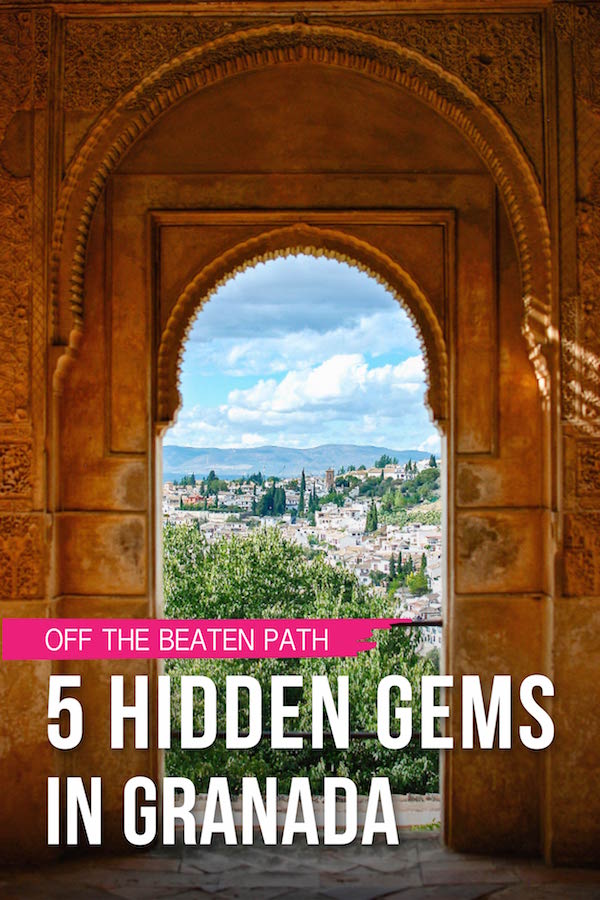