A little-known (and slightly embarrassing) fact about me is that after studying abroad in Granada for four months as a student, I was convinced Spanish food was quite lacking!

How could that be?

I was living with a host mom who cooked frozen foods and rice salads. I knew that this didn’t represent the way all Spanish people cooked, but she somehow convinced me that Spaniards didn’t eat much meat (we had chicken once throughout my stay).

So I survived on free tapas and kebabs. While this may sound glorious to some, the reality wasn’t so great. Granada is famous for including a “free” tapa with every drink, but they generally are not top quality, (and definitely not very nutritious!). And kebabs, as delightful as they may be, can sometimes make you feel like you’ve swallowed a large brick. Simply put, I had no idea where to eat in Granada (or what to order!).

But, luckily, only a few years later, I became borderline obsessive about finding the best places to eat when I traveled. And Granada was no exception. Since my time studying abroad, I’ve been back to Granada over 20 times, each visit eager to make the most of each and every meal. Here are my tried and true recommendations– if you have other suggestions, please add them to my list in the comments!

These are some of my personal favorite places to eat in Granada, which I update each time I visit.

Don’t Miss: If you haven’t booked hotels in Granada yet…

Granada does tapas quite differently than other cities…

WHAT TO EAT IN GRANADA

Here are some of the most typical foods of Granada, which I consider among this city’s most incredible bites.

Granadinos love their fried fish, and enjoy it in small fish fry tapas bars and take away stalls called freidurías. We feature delicious fried fish on our food tours, from a multi-generational shop! Here are some common fish you’ll find on a menu:

Granada’s beautiful Alpujarras mountains are home to some of the region’s best ham. This is not the Iberian Acorn Fed Ham, but rather a ham called Jamón de Trevelez. This ham is from a white hooved pig and is air dried in small ham factories that dot the region. The actual village of Trevelez is the highest in all of mainland Spain! You can find ham on just about everything in Granada (if you are a vegetarian, start practicing “sin jamón, por favor!”.

While the Andalusian regions of Jaén and Cordoba may be the most famous for olive oil, Granada can definitely hold its own and some wonderful producers are found less than an hour from the city. Make sure the restaurants you are visiting have aceite de oliva virgin extra for your salad and bread!

Granada is one of the best places in Spain to eat authentic Moroccan dishes (some of which actually originated in Granada– not Morocco– when it was still Al-Andalus). See my recommendations below to taste some of the city’s best.

As a student city, the kebab scene is thriving in Granada. As I said earlier, I survived for four months on free tapas and kebabs! The best kebabs in Spain come from Granada (in my opinion!).

In Granada’s tea shops and kebab windows, you’ll also find dulces árabes (like baklava and other pastries made of phyllo dough, nuts and covered in honey or sugar syrup).

When I was a student in Granada I went out nearly every night (my classes the next day didn’t start until 3pm!). But it wasn’t always for a beer or wine– often I visited a tea shop for a pot of steaming hot tea. My favorites were the classic mint tea or the milky spiced té Pakistani (which reminds me of Chai).

Made using stale bread as the body of the dish (kind of like American stuffing), the Granada version of migas (common to the Alpujarras area) also includes garlic and is usually topped with a grilled green pepper and local sausages.

Another traditional dish from the mountains consists of a hearty combination: blood sausage (morcilla), pork loin (lomo), sausage (longaniza), cured ham (jamón), potatoes (papas a lo pobre), and a fried egg. This is a dish you need to be hungry to eat– but it’s so satisfying!

While common throughout Spain, the proximity of delicious tomatoes makes Granada a great place to enjoy your breakfast toast with freshly grated tomato and extra virgin olive oil. Some places also do homemade jams– worth asking!

I adore the fluffy style of churros that are common to Granada. Perfect dipped in sugar (I prefer this to the thick mugs of chocolate), you can find them in Granada’s churros cafés in the morning (from about 8am to noon) and afternoons (about 5pm to 8pm).

The word meatball comes from Arabic (we know this because it starts with “al”). I have a feeling that meatballs have been a part of Granada’s cuisine for many years. Luckily we can still find delicious meatballs at many local tapas bars.

Granada’s signature pastry (with origins in Al-Andalus as well), these homemade delights are a must-try. They consist of a delicate sponge cake soaked in milk and spices, which is wrapped around sweet custard. They’re perfect with coffee.

If you are lucky to visit when pomegranates are in season (fall/winter) don’t hesitate to taste the namesake fruit of this city! Other delicious winter fruits are persimmon (kaki) and custard apple (cherimoya).

WHERE TO EAT IN GRANADA

This lovely little bar/restaurant is around the corner from the main streets and really worth a visit. Their wine list is decent and reasonably priced, and their tapas are made using top ingredients. When we saw a slice of cheese on bread as our first tapa we were a bit disappointed– but then it turned out to be the most delicious bite of cheese we’d had in a long time!

Everyone who visits Granada has to visit the gorgeous Mirador de San Nicolás for one of the best views of the Alhambra. This ice cream shop is right off of the square and sells homemade ice creams, perfect to enjoy while watching the sunset!

See also: Where to Eat Near the Alhambra

Pastelería López-Mezquita is one of the city’s most historic pastry shops and a great place to taste the Granada specialty, a pionono.

Famous for their Italian-style gelato, Los Italianos is considered the best ice cream in Granada by locals. Try their local flavors, like pionono!

A tiny hidden gem with an impressive amount of wines by the glass. Try something local (Granada makes some great wines!) and learn about their wide selection.

One of the most authentic “old-man bars” in Granada (go in at aperitif time and you’ll understand why we use that term!), this is a must-visit for a drink while in town. You have all the standards of an old-fashioned Spanish bar, grumpy waiters and enormous wine barrels included. I like to stop here for a drink only (as the tapas leave a lot to be desired).

The most famous fried fish tapas bar in town, cram in and enjoy a caña (small beer) with a generous free tapa. It doesn’t get much better than this!

Francisco shares his passion for local cuisine at his multi-course menu dining experiences. This is a culinary experience (not a restaurant) and is best for people without food restrictions and an open mind. You won’t be disappointed, reservations are a must!

My favorite restaurant for authentic Moroccan food in Granada, this place started out as a tiny hole-in-the-wall run by a husband and wife team, and has now moved down the street to a slightly larger space. Go for a tea, cous cous, and tagine– and don’t miss the pastela.

One of the most famous tapas bars in town, here you will receive a Moroccan inspired free tapa with your drink. I think the quality is hit or miss, but it is definitely fun when you need a break from the jamón!

One of the most-loved tapas bars by locals, this is a great place to enjoy a glass of wine and a tapa (or two!). They also have great homemade desserts, which is a rarity in Granada!

One of my favorite places in town for freshly fried churros, this bar sits at one corner of Granada’s gorgeous Plaza Bib-Rambla. It’s definitely worth a visit in the morning in the height of the breakfast rush to see the local way of life.

Hidden away right off of the city center, this tiny wine bar is perfect for a night of tapas and wine. Go early to get valuable bar space, and stick around since the tapas definitely improve each round.

I’m not an expert in the tapas bars and restaurants of the Albaicin area, but I do love Café 4 Gatos for breakfast. Their toasts are enormous and delicious, and they have options you don’t find at more traditional places.

For beautifully presented food in a quiet corner of the Albaicin, you can’t go wrong at El Trillo. This is not a tapas bar, but rather a restaurant. I recommend dining in the pretty courtyard– make a reservation!

One of my favorite tapas bars in Granada, this small place is located near the university and is worth finding. We usually order a few raciones to share, and also enjoy the tapas with our wine. They have a large selection of wines and are happy to help you decide.

This shop/tapas bar is a bit odd– you have to sneak under the bar to get to the back room! The front of the place is a small deli, specializing in gourmet products. If you sit in the back room you can enjoy cured meats and cheeses with wine or vermouth.

KNOW BEFORE YOU GO

My opinion of Granada has definitely changed over the years! I went from thinking that the food was pretty awful, to loving my visits here– for the food! While you do have to search out the good tapas places, when you find them the value for money is great, and the products are excellent. I’m so excited to share the culinary history of this incredible city (Andalusian cuisine fascinates me) and mix these stories and recipes into more posts about Granada!

And if you have more tips for where to eat in Granada, please leave them in the comments! And if you’ve already been– where (and what!) did you try? 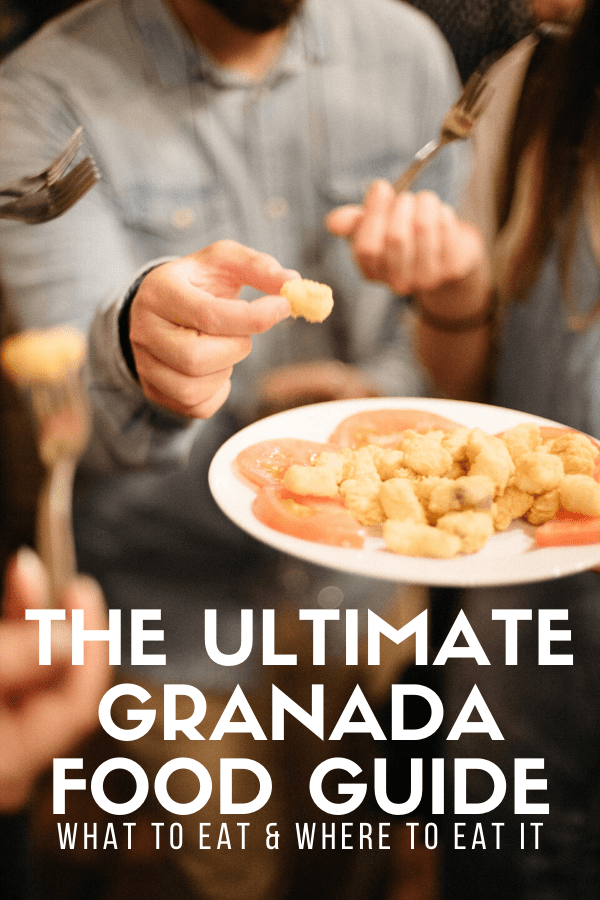