You don’t need to go to a gallery or museum to see some of Granada’s best art—that’s because some of the most impressive masterpieces in the city decorate the outer walls of shops, hotels and more! Street art in Granada is as common as free tapas are. Talented artists have used the city as their canvas, transforming plain white walls into especially colorful murals and works of art. If you want to find the best street art in Granada, it’s best to simply let yourself get lost. As a result, you never know what treasures you’ll discover. However, this guide will serve as a starting point and provide context into the city’s incredible works of art.

Guide to Street Art in Granada

Without a doubt, Granada’s old Jewish quarter holds some of the city’s greatest gems in terms of street art. The barrio is home to the city’s most prolific artist: Raúl Ruiz, better known as “El Niño de las Pinturas” (“the kid with the paintings”). Now an internationally known, award-winning artist, Ruiz still remains true to his roots. His work can be found all over Realejo and has become a reference for stunning street art in Granada. His website includes a map showing where to find each of his paintings, but here are a few of the best.

One of the largest and brightest murals in Granada adorns the walls of the school Colegio Santo Domingo. The work is so enormous that Ruiz enlisted the help of some of his artist friends from as far away as Portugal to help complete it. Artists update the images regularly, so it’s possible you’ll never see exactly the same thing twice when you walk by this mural. You might get a glimpse of cartoon animals, pop culture icons, cherubic angels and more!

Music fans probably know Strummer from The Clash, but might not be aware that the rock icon was a huge admirer of Granada! The city named a small plaza after him in 2013, which Ruiz then christened with a spray-painted mural featuring Strummer himself. Head up the street Cuesta Escoriaza behind the plaza, where you can admire more of Ruiz’s work adorning the walls.

One of Ruiz’s most emblematic works adorns the lemon-colored walls of his former home. This mural includes dozens of hidden images, but several will immediately catch your eye, including a wise owl, a woman in hijab, a pianist, and more. What other details can you find?

Continue along the same street as the above-mentioned mural and you’ll eventually come to a familiar sight: Rodin’s The Thinker. Except this version, unlike the original bronze sculpture, is two-dimensional and spray-painted on the wall outside Granada’s Hotel Molinos. As one of Ruiz’s most popular works, the especially incredible attention to detail makes it seem like the giant mural was rendered by careful brushstrokes and not a spray can!

The idyllic whitewashed houses of the Albayzín may look like an artistic masterpiece themselves, but the neighborhood also holds some of the best street art in Granada! Unlike Realejo, there’s no one artist who deserves most of the credit here. While different from Ruiz’s characteristic style, the murals brightening up the streets here are painted by other talented local artists. The bursts of color and beautiful details make this iconic barrio a must-visit for graffiti fans as well. 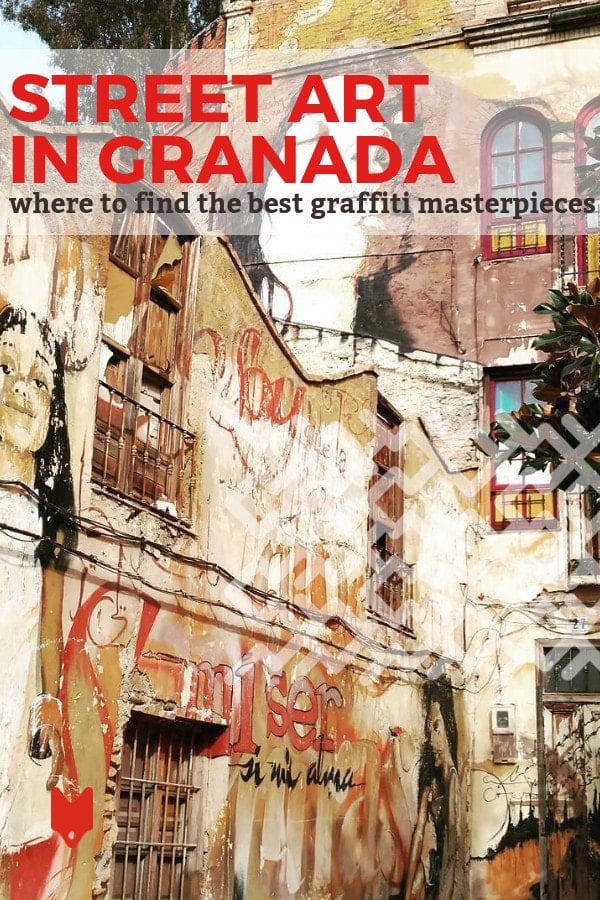