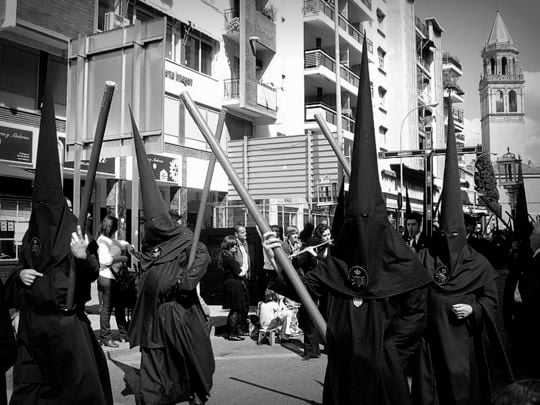 Although I am not a big fan of Seville’s world famous Holy Week (Semana Santa), I feel lucky to have lived there and to have experienced a Semana Santa in Seville . It is truly unlike anything I’ve ever seen before, and the passion among the people watching and participating is incredible. I know that a lot of people living in Spain or coming to visit would like to know a bit more about the intense Semana Santa festivities in Seville, so I’ve called in Seville local Cat Gaa to describe the week long event.

The wail of a woman bedecked in black, a tortoise shell comb perched on her head with a flowing lace veil of the same color, pierces the air. As I stand on my tiptoes, neck craned over the shoulders of the people on the curb in front of me, a glint of gold catches my eye. The heavy float, complete with a creepy skeleton sitting on top of a globe, moves through the doors, maneuvering as the men beneath it buckle under its weight. The crowd falls silent.

Not your typical parade, Seville’s Holy Week, known locally as Semana Santa, is a week of solemn revelry when larger-than-life figures depicting the life, death and resurrection of Jesus Christ are paraded through the central streets of the city in a cloud of incense and bodies. From Friday of Sorrows (Viernes de Dolores) until Resurrection Sunday, no less than 60 brotherhoods will parade their floats – usually one of Jesus Christ and one of his mother, the Virgin Mary – from their temples to the Seville Cathedral and back.

For revelers and the faithful, this long-standing tradition is passed down among families and seen as the gateway to spring. For those not used to the spectacle, it can be both bothersome and beautiful, annoying and artistic.

Seville’s first recorded Holy Brotherhood, El Silencio, dates back to the mid 14th Century, and the 18th and 19th centuries saw a revival in Holy Week. By this time, many of the statues carved of wood and sculpted of porcelain had become practical life-sized relics and are considered masterpieces. 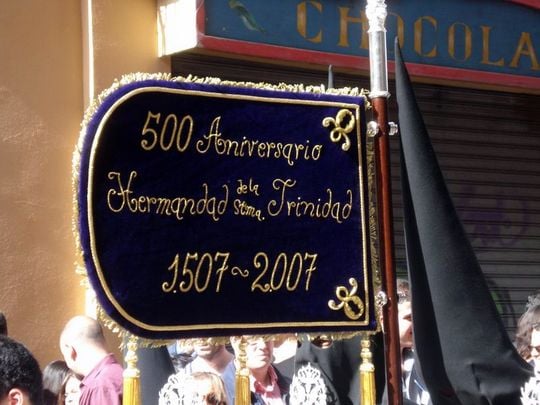 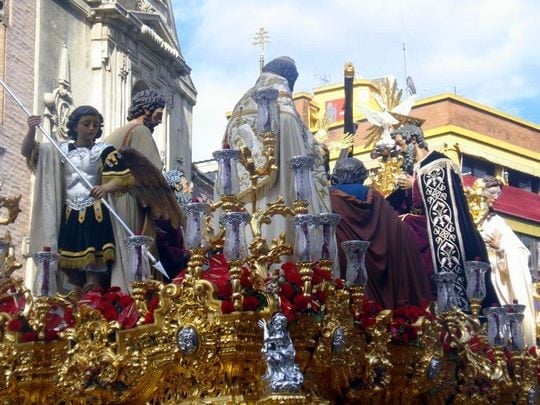 Throughout its 500-year history, the brotherhoods across Spain and its colonial territories have multiplied, and rules have been re-written. Schedules were added, and brotherhoods were required to make a stop at the Cathedral, pray, and take the eucharist, before returning to their temples – resulting in journeys lasting more than 12 hours! The result is a socio-cultural phenomenon that is popular with Spaniards and tourists alike.

Witnessing Holy Week means learning a new set of vocabulary as you watched the processions. The brotherhoods are known as hermandades, which are governed by a senior member of the group called the hermano mayor. These brotherhoods – some of which allowed only men to participate until just recently – are those who accompany the pasos, or the large floats carried on the shoulders of the faithful, on their trip to the Cathedral during Holy Week.

The anatomy of a cofradía:

La Cruz de Guia / The Guiding Cross is the first symbol of the brotherhood, which is also known by the name of cofradía. Next come the nazarenos, dressed in tunics and pointed hats called capirotes that resemble Ku Klux Klan members (but, clearly, the brotherhoods have existed far longer than the KKK). The nazarenos tend to carry cirios, or long, thick candles. Other brotherhoods also make use of young members of the church by employing monaguillos, or small children dressed as priests who hand out candy to children watching the processions. 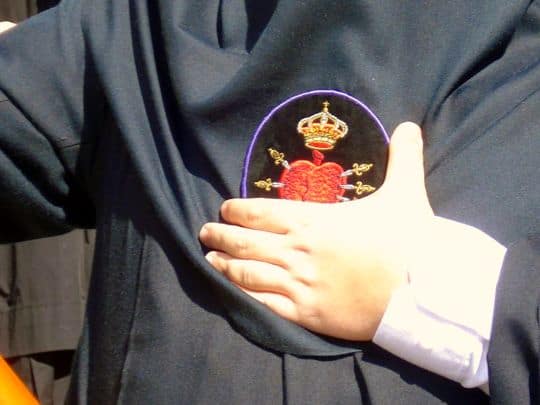 The pasos come next, carried on the nape of the necks of costaleros. Becoming a costalero requires practice and strength, as they go under the float and march for hours bearing the float. Their actions are directed by the capataz, who uses a language of knocks to direct the conduct of the nazarenos – look for the feet of the costaleros under the floats! The paso depicting Christ almost always comes before that of the Virgin Mother. Some brotherhoods are accompanied by a brass band, while others have over 2,500 nazarenos! 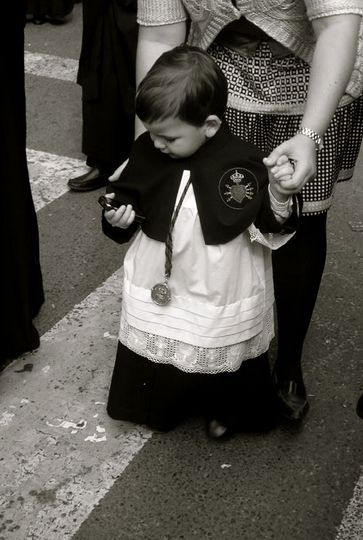 Each brotherhood has its own history and tradition, from curtseying when passing another float, to how the Virgin Mary is dressed, to silent processions, distinguishing each brotherhood from the others. The Santo Entierro, or Holy Burial, of Holy Saturday also has top brothers from each cofradía participate in their procession.

Where to See and Be Seen (And sleep if you Must)

All brotherhoods follow a long-established path, from their home churches to the Cathedral and back on their assigned day, but all pass through the Carrera Oficial, or Official Path, which travels from La Campana Square down Sierpes Street into the San Francisco Square and onto Constitución Avenue. These streets are lined with chairs called palcos for those who rent and pay for them, and locals often rent out their balconies. The city also distributes official routes of each brotherhood and the approximate times of their arrival at each stop. Be aware that even the slightest threat of rain can call off an entire day’s worth of processions.

If you aren’t fortunate to be along the Official Path, try watching the exit (salida) or entrance (entrada) of a float. It is beautiful and proceeded by the haunting saeta song. Witnessing the floats from the Triana Bridge is a spectacle that shouldn’t be missed.

If you’re staying in the city center, expect high prices and a lot of noise. It’s advisable to stay further out in the San Bernardo or Nervión neighborhoods, but always book far in advance to ensure space. Similarly, locals sometimes rent their homes out at a premium for multiple days during the festivities. If there’s one night when you don’t sleep, let it be Maundy Thursday, where silent processions, march at night. Known locally as the madrugá, the city’s most beloved processions – the Macarena, the Virgen de la Esperanza de Triana, El Jesus del Gran Poder among them – slip around the city, lit only by candles. Other popular processions are San Bernardo, El Silencio and El Cachorro.

Semana Santa May Not Be For You If…

Many sevillanos choose to escape to the beach just as the weather turns warm. Holy Week is a time when the city center swells in population, making it difficult to get around on foot and public transportation, impossible to do touristic things and hotel rooms are charged at high season prices. If you’re interested in seeing Holy Week for yourself, many cities around Andalusia and beyond are noted for their smaller-scale celebrations and traditions like Malaga and Valladolid.

If you’re not in Seville during the festivities, several Holy Week bars around the city have images of the pasos and countdowns until Palm Sunday, often accompanying your beer with the brass band music and wafts of incense. In the center, try La Fresquita (Mateos Gago Street), and in Triana, Bar Santa Ana (Pureza Street) for local far and proximity to beautiful churches and their statues. Their bartenders are often members of nearby brotherhoods and are willing to explain tradition and culture while you kick back with a beer or sherry.

After the gold-laden statues have been packed away in dusty corners of their churches, Sevillanos have just two weeks to prepare for their other Spring festival: the April Fair, where inhibitions are thrown out the window and the incense and black lace dresses traded for sherry and flamenco dresses.

Cat Gaa is the opposite of a capillita, fleeing Seville as soon as the incense starts smoking and the brass bands send their piercing shrill into the air. Even though only one paso parades past her house, she uses her vacation week to travel while publishing at Sunshine and Siestas, a lifestyle blog about Seville and its food, culture and history. For a complete website in Spanish about Holy Week in Seville and its brotherhoods, click http://www.galeon.com/juliodominguez/estampas.htm .

Have you ever been to Semana Santa in Seville? What did you think? Any advice for future travelers?

Looking for the best of food and tapas in Seville? Check out my best bites in Seville article and try one of my food tours in Seville to truly connect with the local gastronomy! I’d love to have you along!