As the winter cold starts to lift, Spain is cranking into celebration mode. And in February the star of the party is almost always edible! From a green onion grill-fest in Catalonia to carnaval celebrations from Cadiz to the Canary Islands, February is a month to not only eat well, but to celebrate every bite.

The fruit stands are still blooming with bright citrus and the neighborhood market vegetable tables are overflowing with leaves and lettuce in every shade of green. Spain in February may still be chilly but, as one of the warmest climates in Europe, the colors of Spring are starting to make an appearance in Spanish gardens.

Here are some of the foods to look out for this month both at the grocery store and at the street fairs.

There are few vegetables in Spain that can create a stir quite like calçots. Eating these thumb-thick green onions from Catalonia has turned into more than just a February event, but an all-out celebration.

The calçot extravaganza, known as the calçotada, begins the last weekend of January with the Fiesta de la Calçotada in the Catalonian village of Valls, about an hour’s drive west of Barcelona. After that, it’s off to the races. In towns across Catalonia and in Catalan restaurants throughout the country, calçots are the star of the February menu.

The scallion-like onions are nearly always prepared the same way: charred over open flames until the outer layer just begins to burn. Then they are wrapped in newspaper to steam until someone grabs the onion by its green tips, peels back the burnt outer layers, douses the soft white end in a delicious vegetable-almond sauce called romesco and attempts to drop the entire dripping mess into their mouth.

What I’ve spent my entire life thinking of as a summer food is, in Spain, a February food. This month marks the start of strawberry season. Strawberries go by two names in Spain depending on their size. Fresas are smaller, about the size of a thumb from knuckle to nail. Fresónes are larger, at least the length of a wine cork.

Spain is the number one strawberry producing country in Europe and the second largest producer in the world behind the United States.

In February, Atlantic Mackerel begin returning from the depths of the Atlantic where they’ve been hiding out during the winter. In Spain, these mid-sized fish are often destined for a dousing of white wine or olive oil as much of the mackerel caught here are filleted and canned.

But unlike the nightmarish fame that canned fish sometimes has in the U.S., tins of Spanish caballa are often considered gourmet! They are usually eaten on a slice of baguette, in a salad of roasted peppers and tomato or plain as a tapa. They go great with an extra-cold caña of the local draught beer!

By February the traditional pig slaughters, or matanzas, are over and the plethora of cured sausages has spent two months in the smoke house. It’s time to taste the bounty! Chorizo dyed bright red with paprika, salchichón speckled with black peppercorns, lomo embuchado striped with fine ribbons of flavorful fat… the charcuterie on offer this month is enough to make your mouth water!

February also marks the wildest party in all of Spain: Carnaval. This elaborate fiesta got its name from the Spanish word for meat (carne). It originated as a festival to celebrate the end of the smoking, curing and salting of meats and to indulge as much as possible before the meat-free period of Lent begins.

Find out how to pick the best of Spain’s cured meats here: 11 Spanish Cured Meats We’re Kind of Obsessed With.

In a country known for its amazing oranges, grapefruits are largely overlooked in Spain. And that, in my opinion, is a crying shame! Spanish grapefruit, or pomelo, tends to be deep pink on the inside and far sweeter than the grapefruit I’m used to from the States.

If you do find grapefruit on a menu in Spain, it will usually be in a salad. Try swapping out the blood orange for grapefruit in this Tuna Belly, Blood Orange and Avocado Salad recipe.

Orejuelas are the closest Spain comes to my beloved Mexican sopapillas. These crunchy triangles of fried dough are typical during Carnaval and are almost always doused in honey. Depending on which part of the country you’re in they are called orejuelas, orejas de carnaval, hojuelas, orelletes or orejones, just to name a few!

Stuffed with meat and cheese, grilled with plenty of olive oil, or blended into purées, eggplants are used in all kinds of Spanish recipes. One of my favorites is pisto, one of Spain’s most popular vegetarian dishes.

Eggplant, or berenjena in Spanish, is diced and slowly stewed with zucchini, tomato, onion, bell pepper and garlic to make this hearty ratatouille. As all of these veggies are in season in February, they are both easy to find at the market and shockingly flavorful. You can usually find Spanish eggplants in grocery stores until late April.

There are many typical Spanish sweets during Carnaval, but few are as amazing or as diverse as frisuelos. These Spanish-style crepes go by many names depending on which region of Spain you’re in.

In Galicia they are filloas and are sometimes made with a few teaspoons of pig blood and sprinkled with sugar. In Asturias they’re called frisuelos and in nearby León they carry almost the same name, frixuelos. In the Canary Islands something similar is called tortillas de Carnaval and they are a bit thicker and often spiced with anise and cinnamon.

Give the Asturian version a try with this yummy frisuelos recipe!

What is in season where you live? 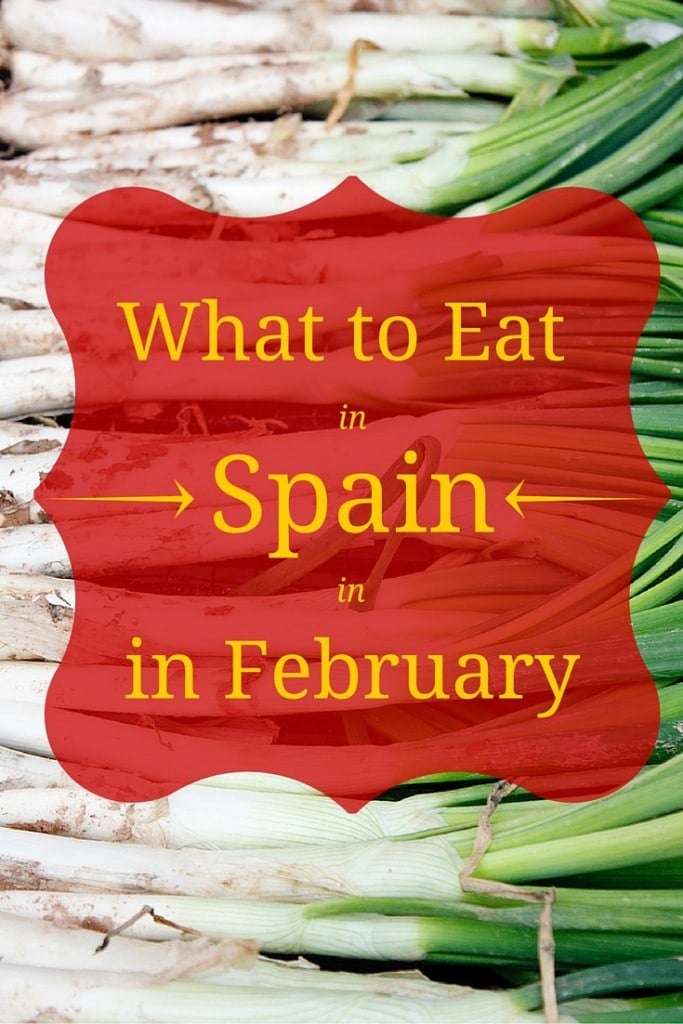