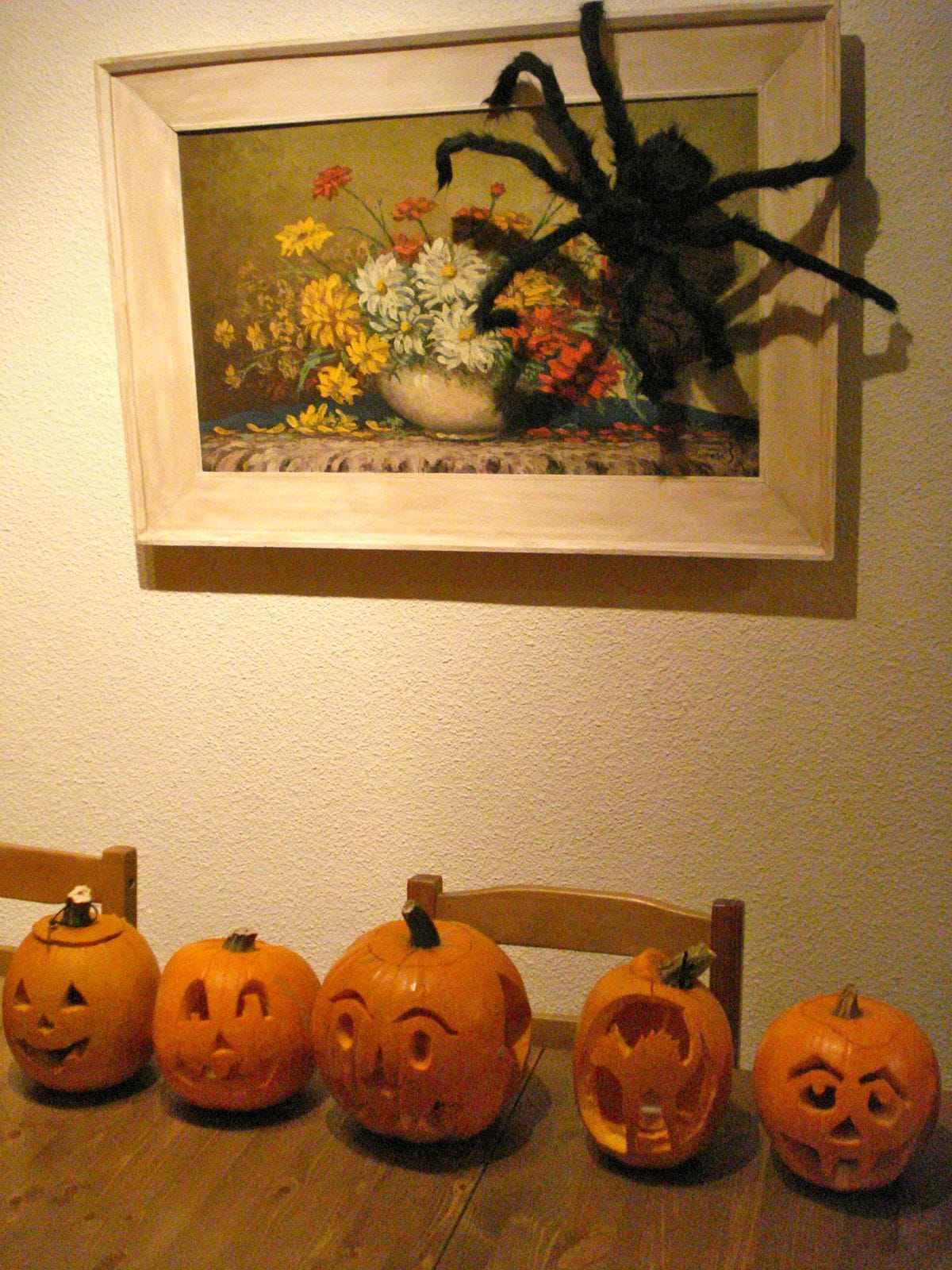 It’s Halloween time again and the stores in Madrid are halfheartedly decorated with a pumpkin or two. It’s not quite as obvious as in the US, but the eager Spaniards are quickly catching on—advertisements for haunted theme parks crowd the metro and Halloween costumes are sold at every neighborhood Chino. I’m not a big Halloween lover. When I was a kid I liked it—costumes, candy, school parties… what’s not to like? I dressed up like everyone else I knew and went trick-or-treating in the bitter cold. Later, we spent months eating our pillowcase full of Halloween candy (my kids are donating that ish…!). In college I went to a costume party or two, but I never got really excited about dressing up and thought think that spending a lot of money on a costume is kind of a waste of money. It just isn’t my thing.

So here in Spain Halloween doesn’t bring that homesick feeling I get with Thanksgiving and Christmas. But, I somehow always end up celebrating it! I always meet someone who loves Halloween—its creepy music, scary movies, ridiculous costumes, and abundance of candy. In fact, I’ve carved more pumpkins in Spain than in the US! And Spaniards (although they misinterpret the holiday a bit) seem to love Halloween too.

This year was no exception. I may have just arrived in Madrid and not really know anyone, but due to today’s amazing technologies (facebook, twitter, gmail, wordpress) I was somehow invited to a fantastic pumpkin carving/seed roasting Halloween party with a group of super cool American expat ladies! 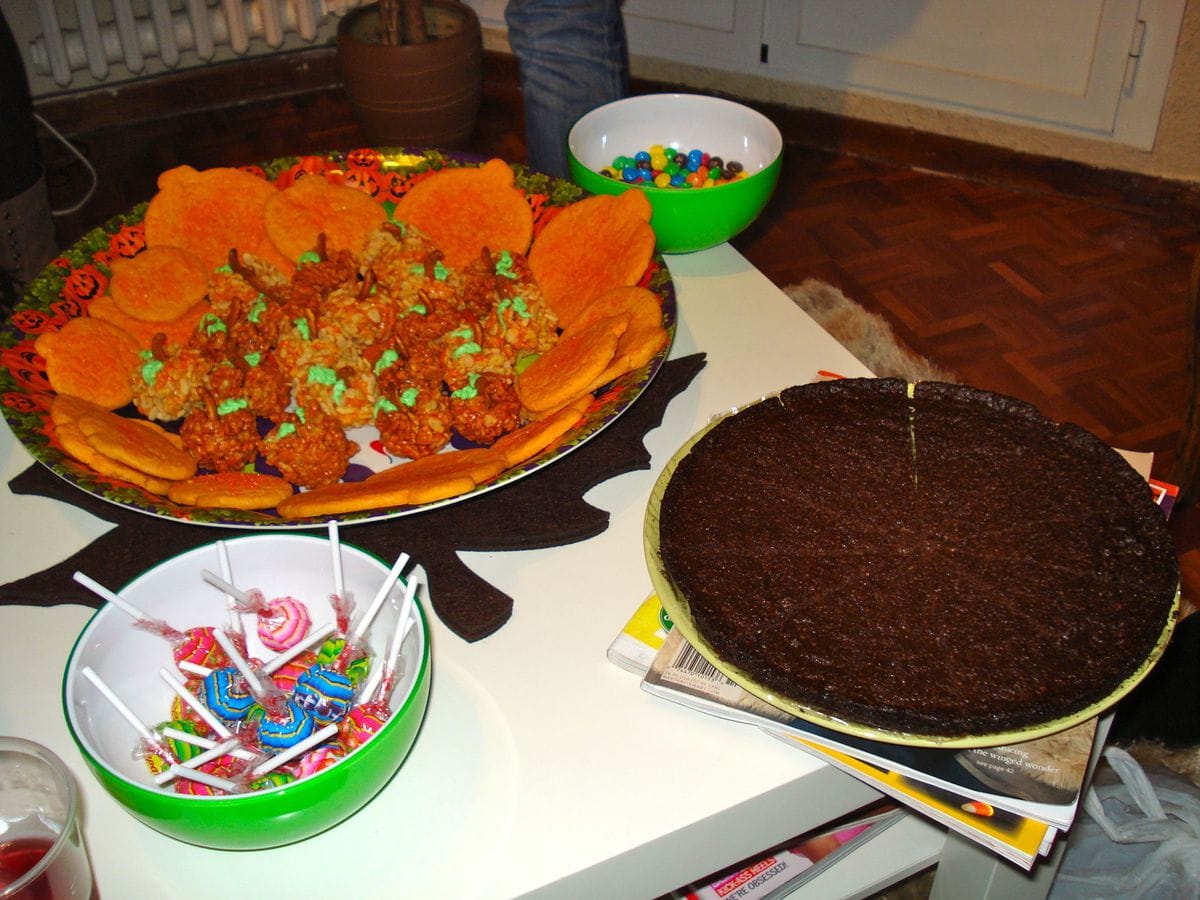 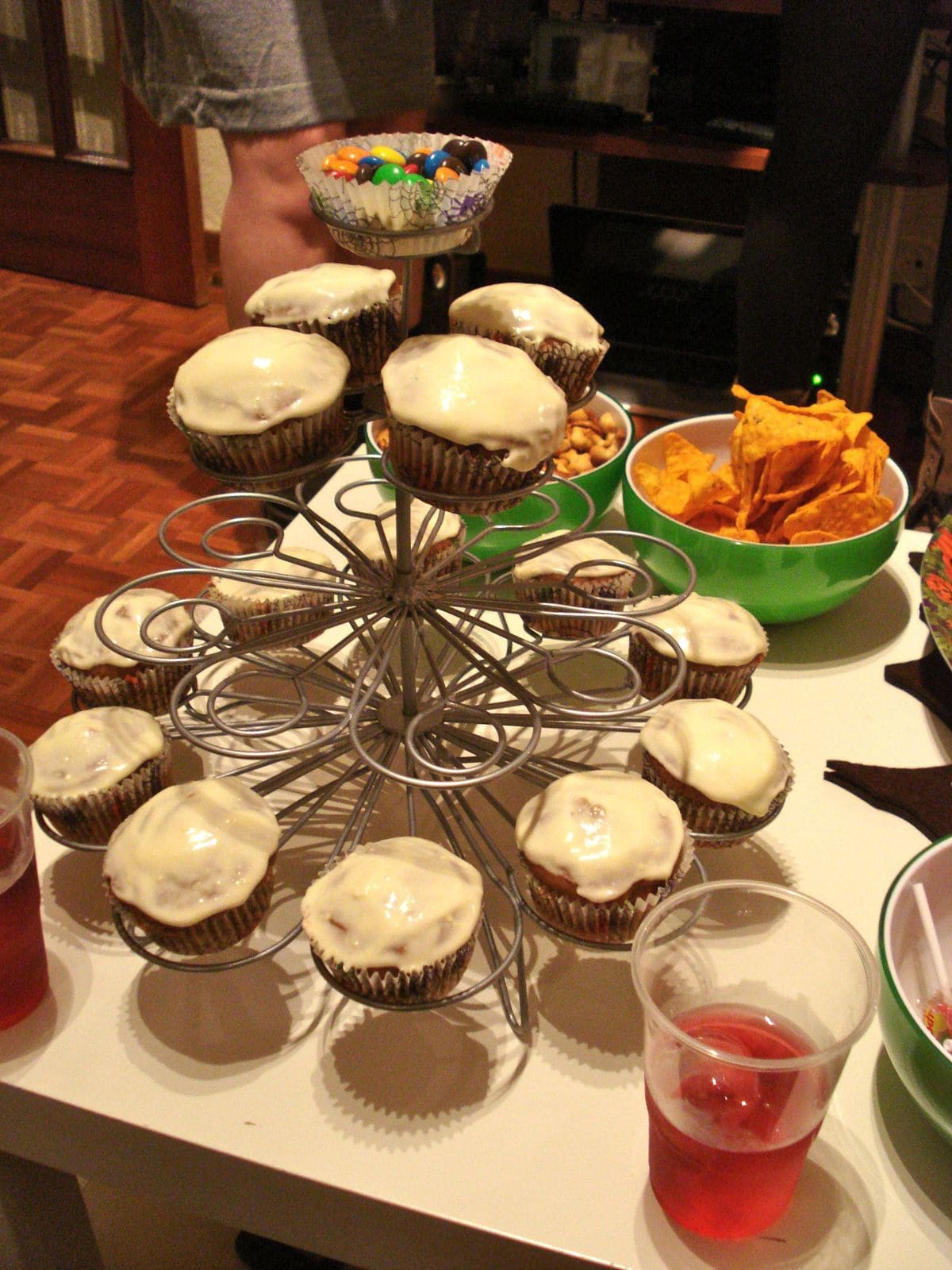 The house was wonderfully decorated (It felt like home!) and there was Halloween music playing in the background.

Equipped with a sharp knife and a book of potential pumpkin carving designs, 10 American women went at it (and I’d say we were successful!) 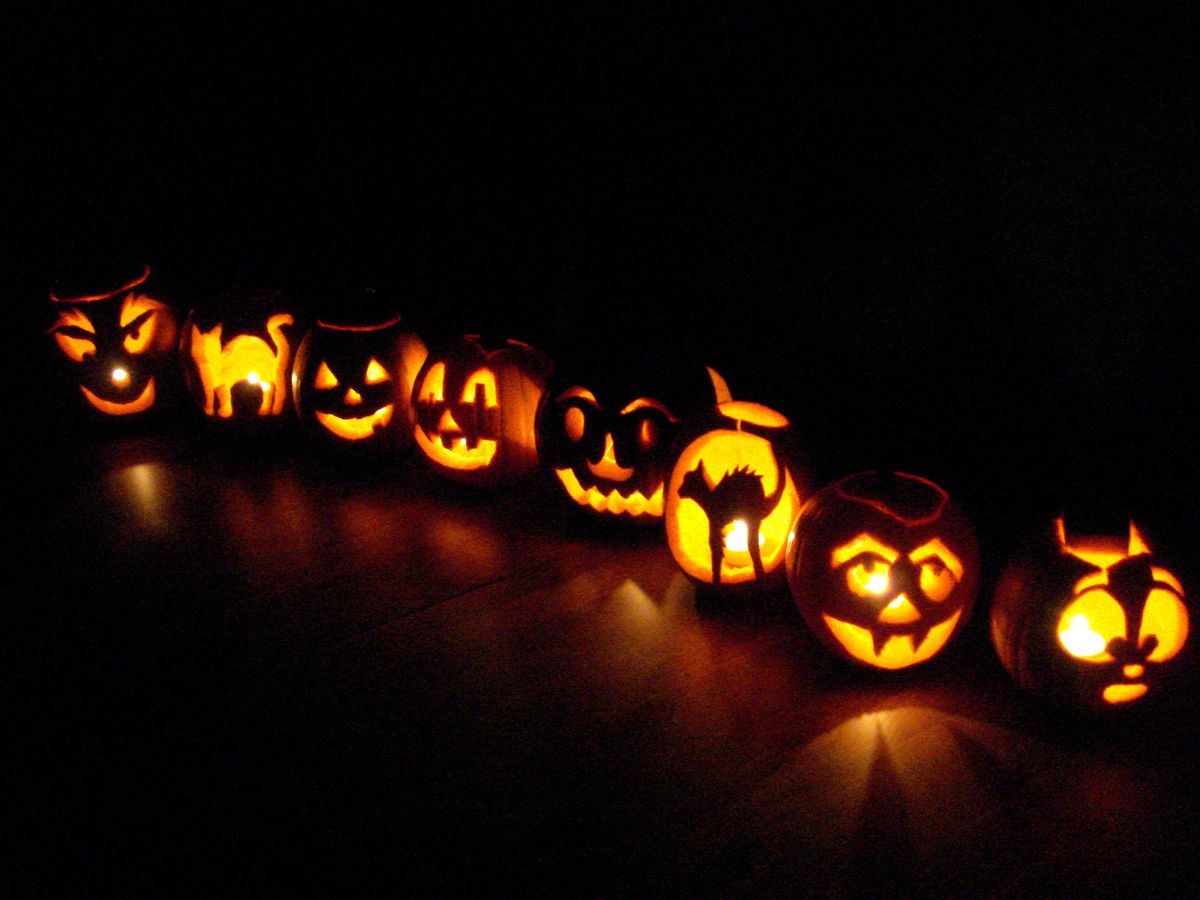 While we carved we shared our experiences in Spain, our stories, our relationships. It was great to connect with others in similar situations.

I left the party with a carved pumpkin, some roasted pumpkin seeds, and a bag of pumpkin (I couldn’t let it go to waste!)

There was only one thing to do… make some mashed pumpkin and some pumpkin bisque! Mashed pumpkin (Puree de Calabaza) is a delicious side dish and it reminds me of home. It’s also the base for my version of Pumpkin Bisque (a lighter version that doesn’t use any cream).

Here is the step-by-step recipe. It’s easy—try it and let me know what you think! 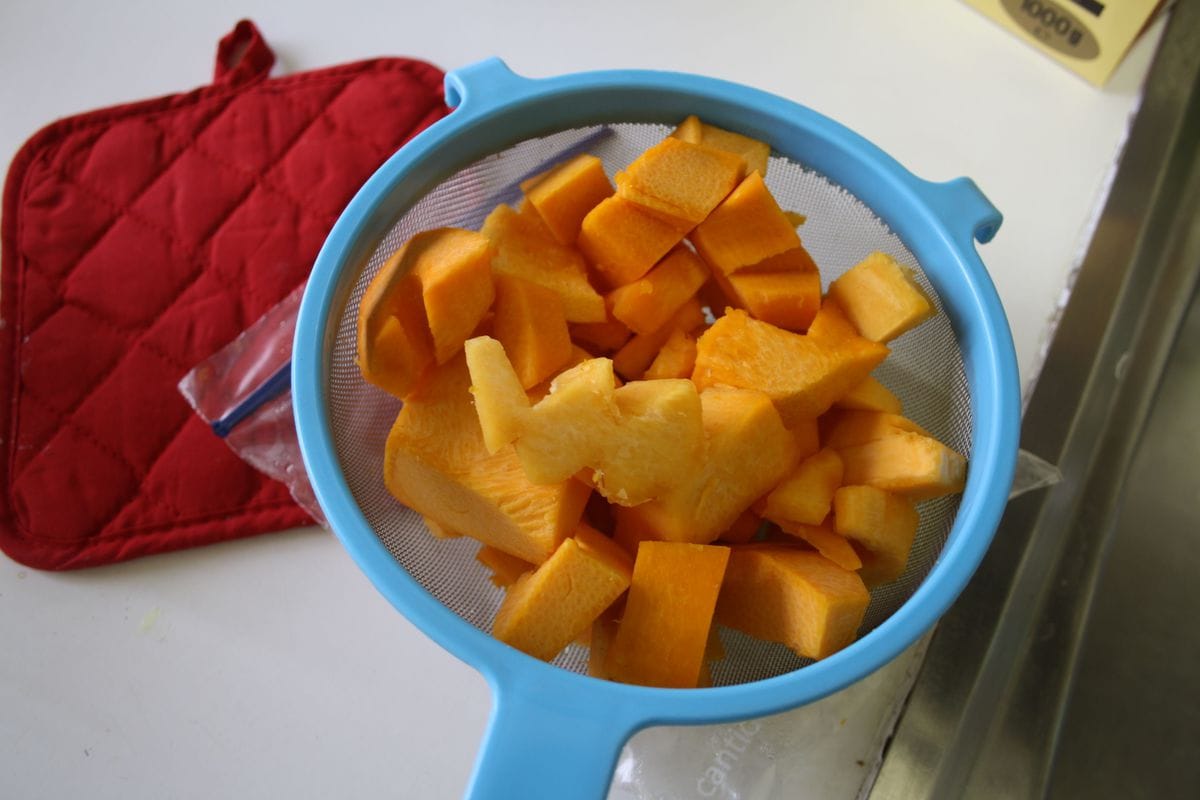 I took the bag of fresh pumpkin left over from carving. The pieces were all shapes and sizes– so I tried to cut them more evenly! 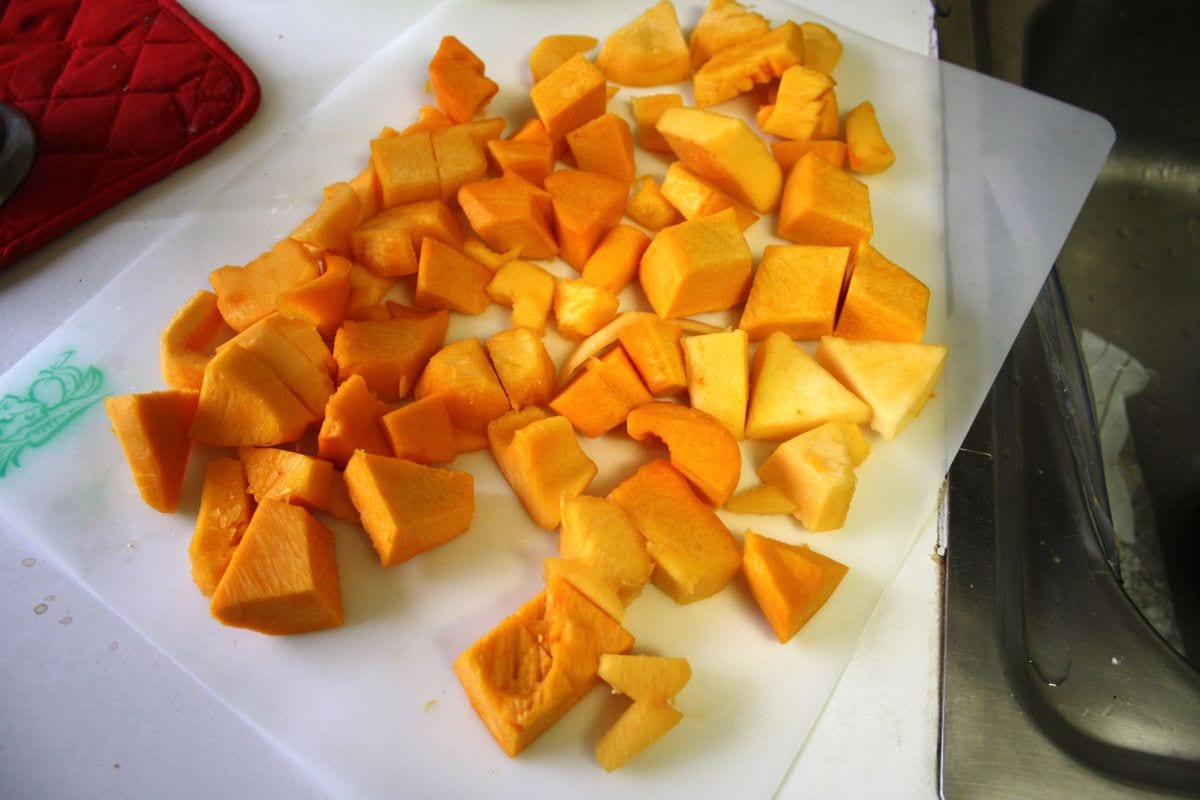 After cutting, I rinsed them under cold water. 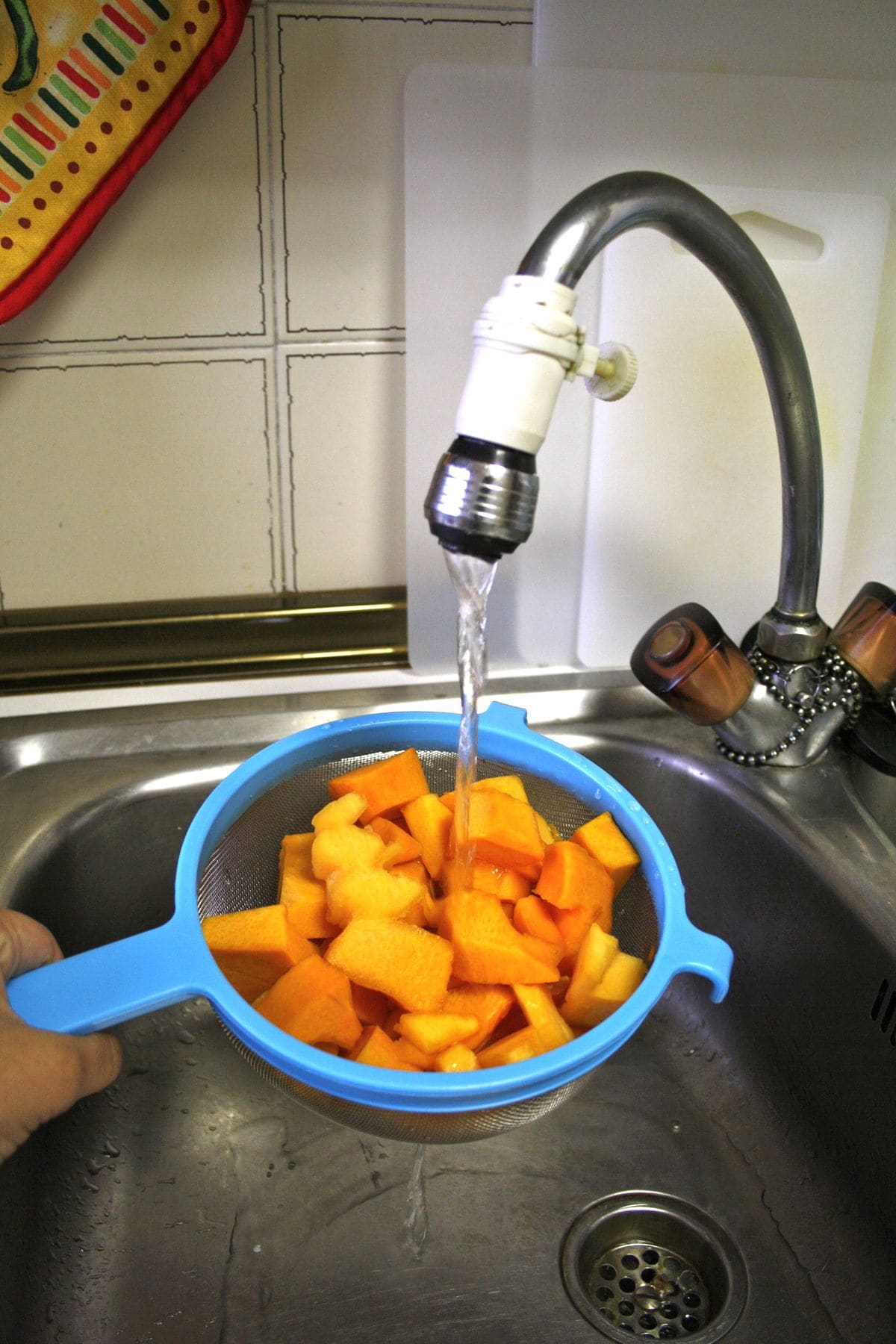 Then, into a pot of cold, salted water and boil until a knife pierces through easily. 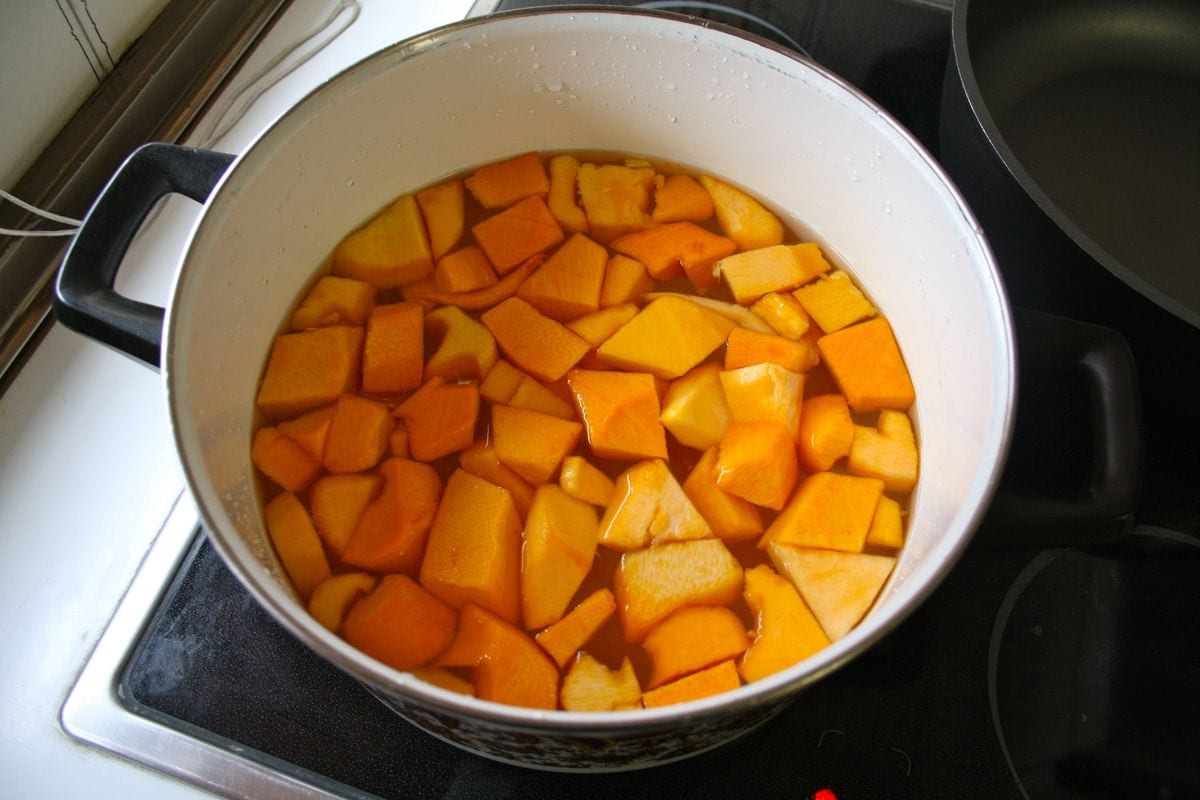 When fully cooked, strain and return to the pot. 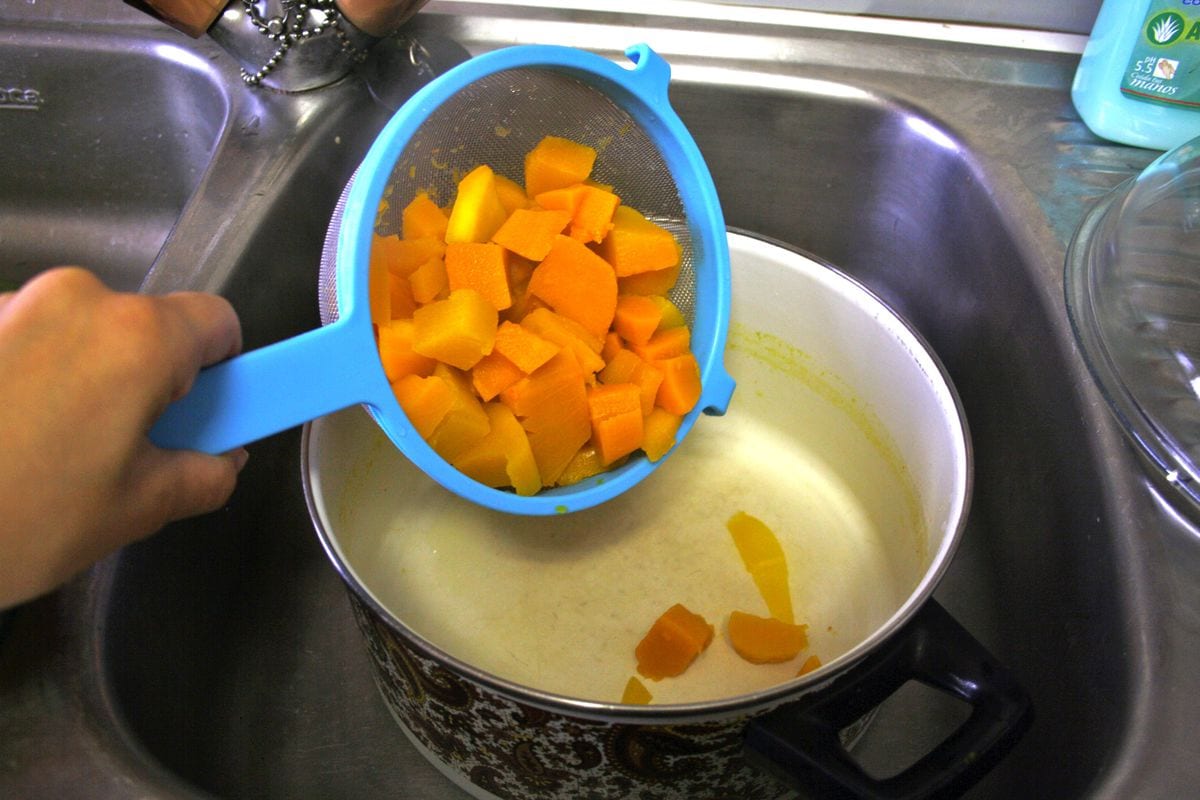 Add 2 tablespoons of butter, 1/4 cup milk, salt, pepper, cinnamon, and paprika. Adjust the butter and milk depending on preference. 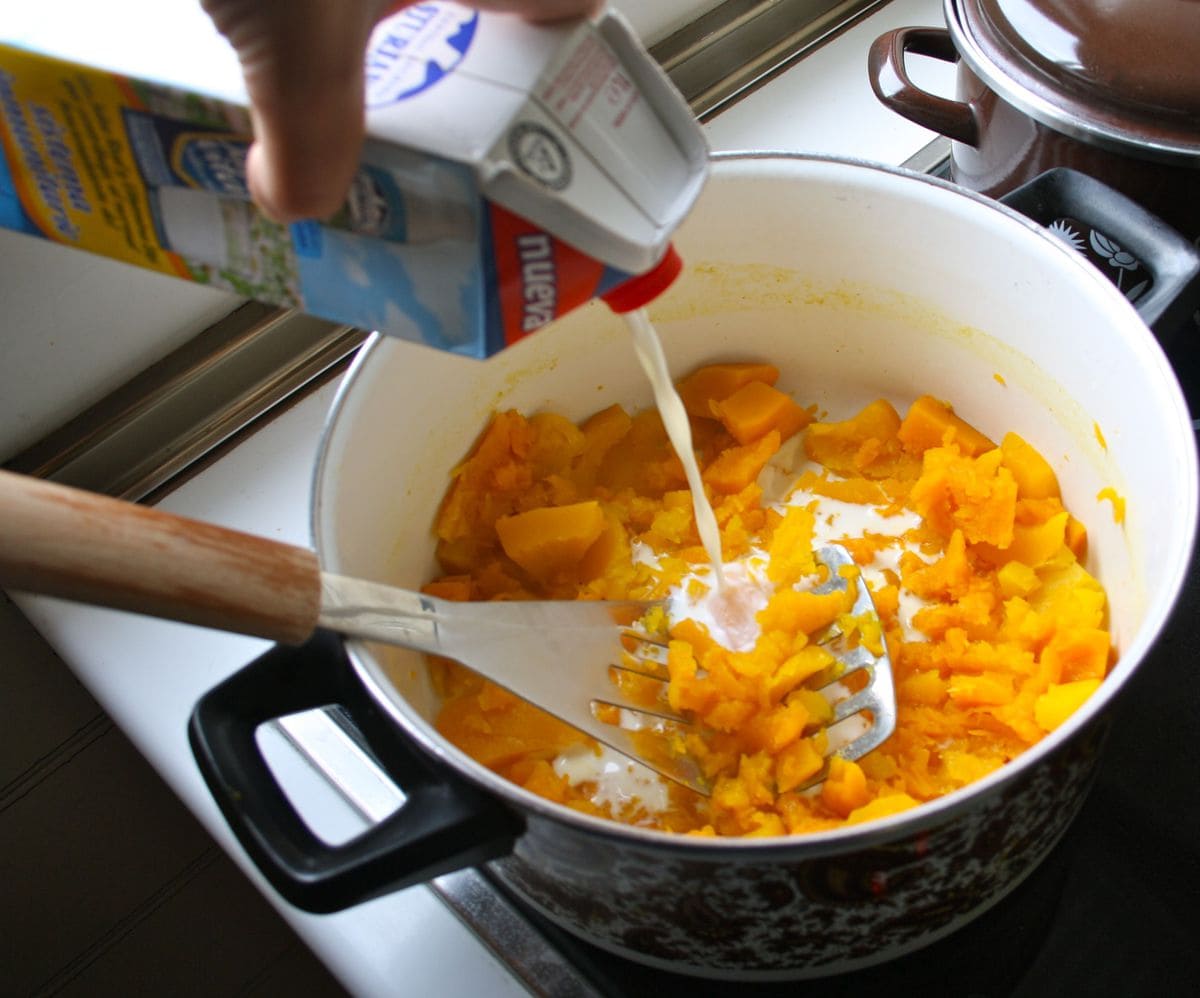 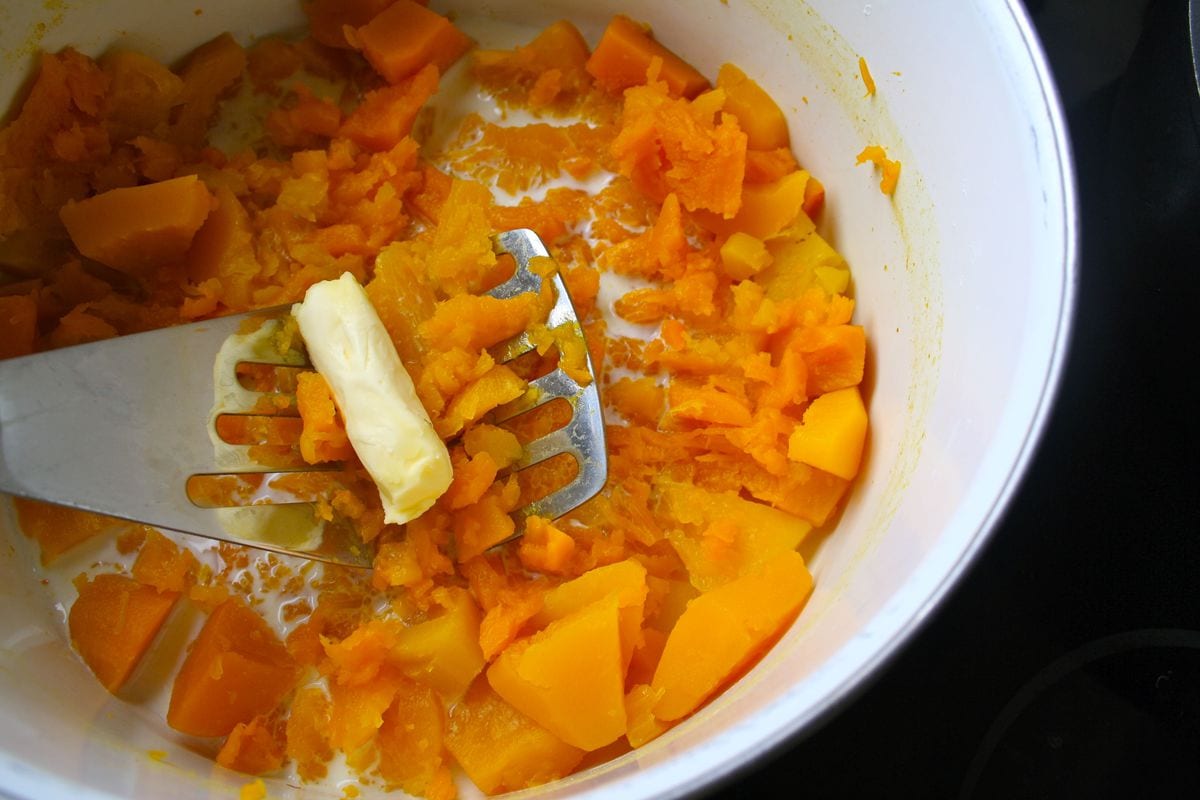 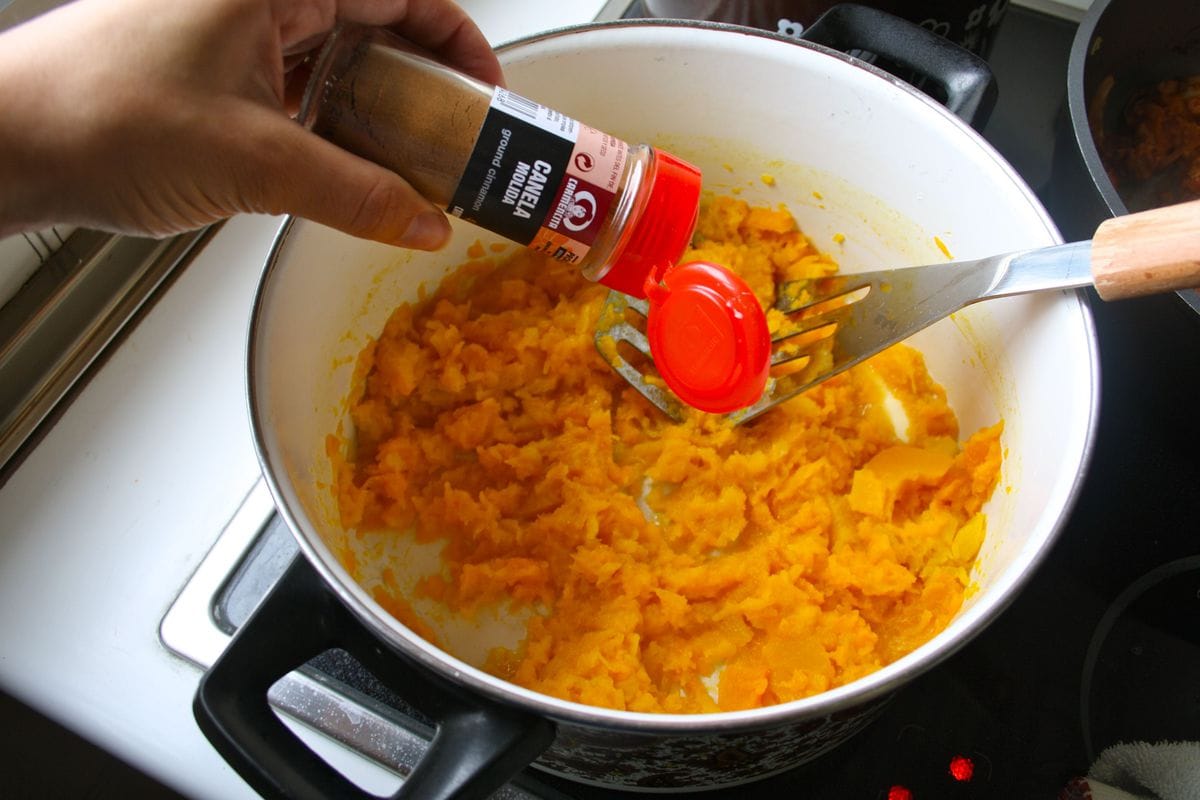 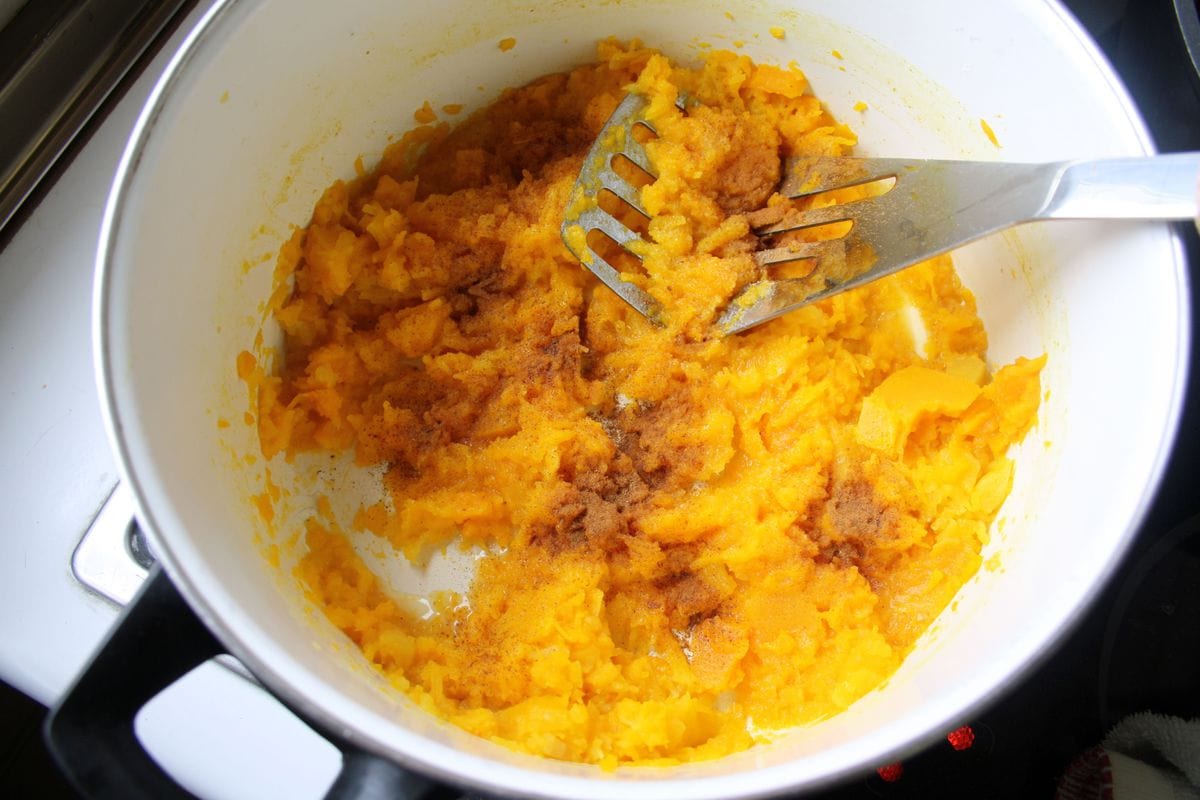 And, there you have it! Mash it up and you have mashed pumpkin. 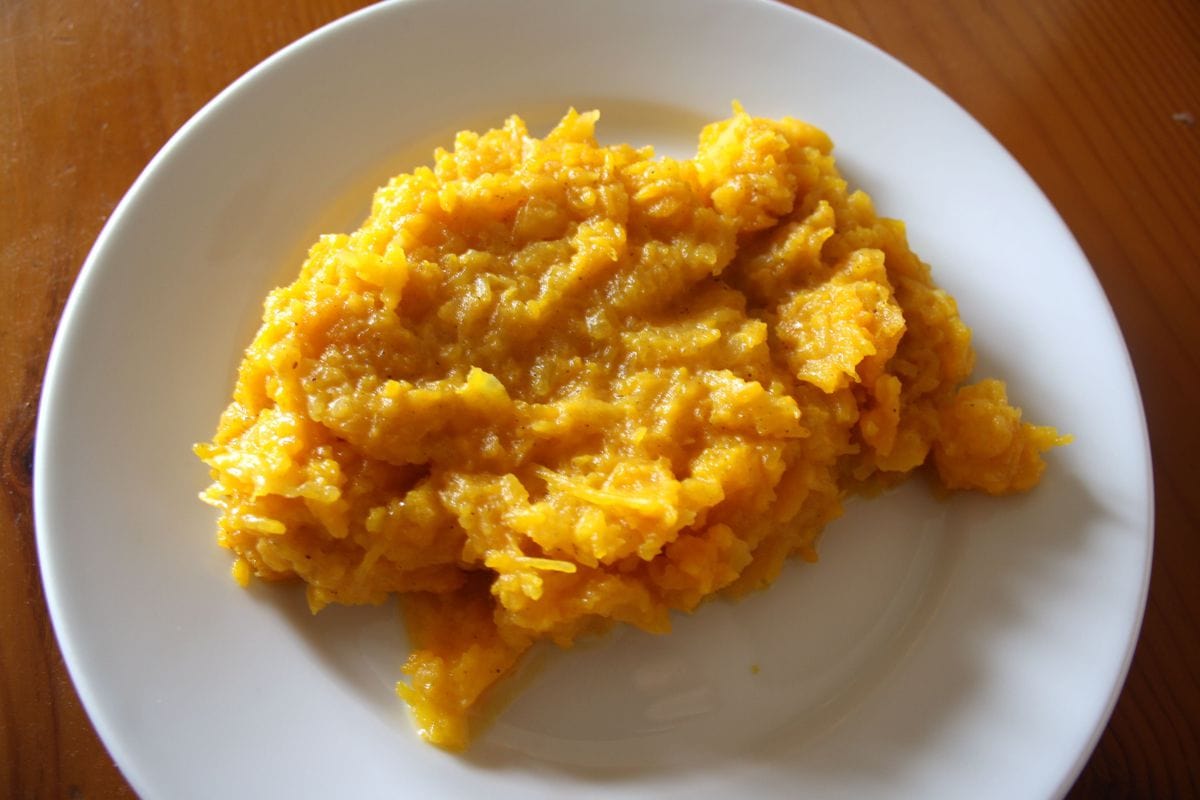 If you want to turn this into a “lighter” bisque (if there is such a thing) just add the puree to the blender and add a bit more low-fat milk while blending. When it is at your desired consistency reheat and enjoy! 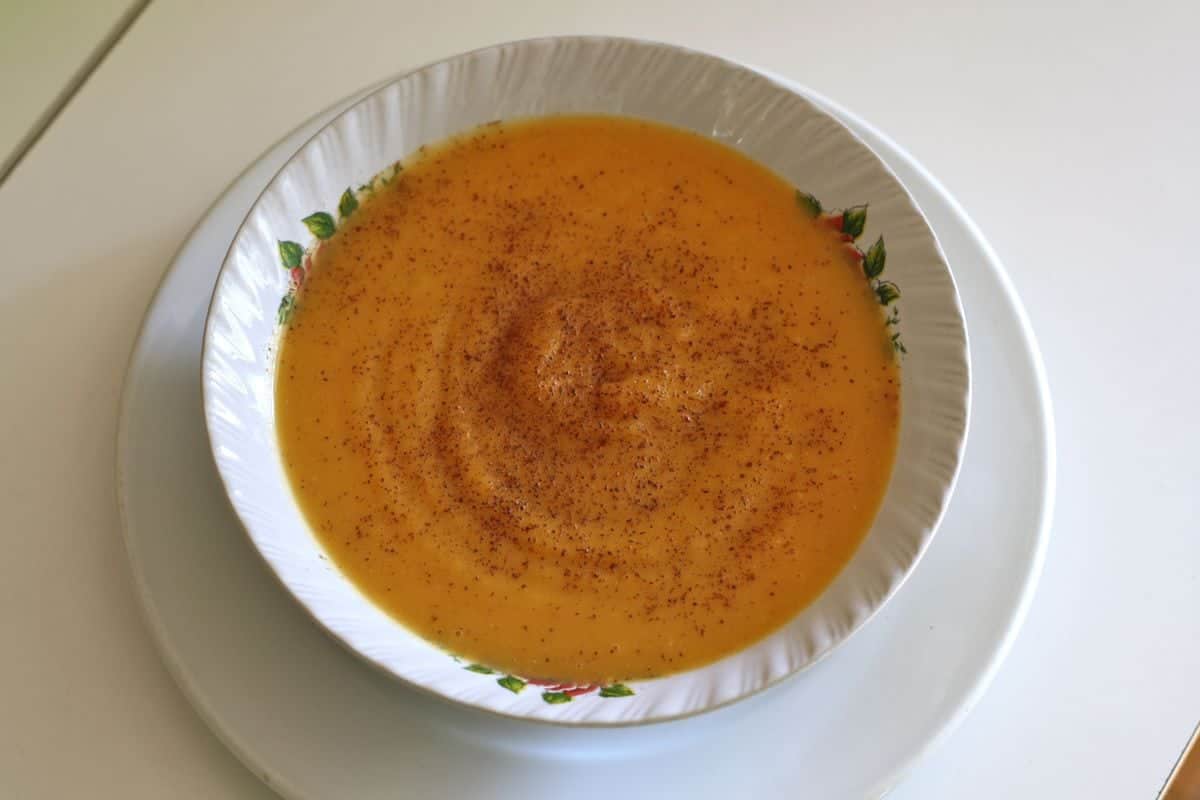