Spanish pimientos de Padrón are one of my all-time favorite tapas. Luckily, they’re also one of the easiest to prepare—and this Padrón peppers recipe proves it!

I’m not one to complain about Spanish cuisine. In fact, I’ve been known to vehemently defend it if anyone dares to do so in my presence. But I do have to admit that there’s one thing I often miss on traditional tapas menus: the color green.

It’s not that Spain has anything against vegetables; they’re central to some of the best Spanish dishes. But at your average bar in Madrid, the menu staples tend to be potatoes, bread, and pork in various forms.

All of these are delicious, but in my opinion, they’re even better when complemented by a splash of color in the form of some fresh produce. Enter the Padrón pepper.

See also: The Most Typical Spanish Tapas in Madrid

What are Padrón peppers?

Pimientos de Padrón are small, bright green peppers that come from the municipality of Padrón in Galicia, in the northwest part of Spain.

They’re usually mild in flavor, with low levels of capsaicin. Every once in a while, however, you’ll bite into one that’s surprisingly spicy, making the act of eating them even more exciting.

At tapas bars, they’re sometimes served with huevos rotos (fried eggs and potatoes) or as an accompaniment to other dishes. But you can also order them all on their own: just a plate piled high with glistening, steaming peppers. I highly recommend this.

Taste it! You can try Padrón peppers on our Devour Madrid tapas tours.

How to prepare perfect Padrón peppers

I never thought to try making Padrón peppers at home until one of my friends gave me a bag of them (aware of my love for all things related to Spanish food and cooking). I was happy to discover that it’s surprisingly simple to recreate the kind of Padrón peppers you get at restaurants right in your own kitchen.

I’ll let you in on the secrets of my Padrón peppers recipe: olive oil, salt, and plenty of heat. That’s it. The magic of these little guys is the complex taste and perfect texture they naturally provide—no need to get fancy.

Try this recipe and see for yourself how easy it is to make delicious pimientos de Padrón! Warning: you may end up eating all 4 servings before they get to the table. 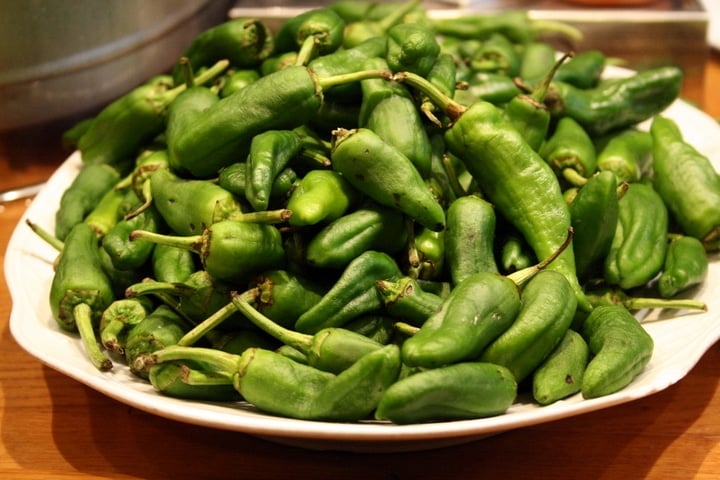 Print
Prep time
5 mins
Cook time
5 mins
Total time
10 mins
Padrón peppers are one of the simplest and tastiest Spanish tapas. Try making them at home with this easy and authentic recipe!
Author: Melissa Haun
Recipe type: Tapas, Vegetarian
Cuisine: Spanish
Serves: 4
Ingredients
Instructions
Notes
Make sure to watch out for flying bits of oil, and let the peppers cool for a few minutes before you eat them!
3.4.3177

Have you tried our Padrón peppers recipe? Got any tips and tricks to add? Share them in the comments!