One of Spain’s most popular comfort foods is migas con chorizo. This easy migas with chorizo recipe combines stale bread, olive oil, garlic, and chorizo for a true treat. Serve Spanish migas for breakfast with a fried egg, or as a side dish (it can even replace your Thanksgiving stuffing this year!).

Migas is the Spanish way to take advantage of stale bread, and the most basic version is a simple dish made by frying stale bread chunks in olive oil seasoned with garlic cloves. I call it Spanish stuffing!

People dampen the stale bread in water first, and once fried to golden perfection, they remove the bread and mix it with a variety of yummy extras– from fresh chorizo to juicy salt pork to fried eggs and roasted red peppers. Final additions to Spanish migas even include sweet bites, such as grapes or pomegranate seeds.

It’s important to note that here in Spain, migas are usually served as a full (and heavy!) dish.

But of course, if you are making migas with chorizo as a part of your Thanksgiving meal, they aren’t meant to steal the show. I recommend making this simple version, which I use each year as my Spanish style Thanksgiving stuffing, to accompany your heaping plate of Thanksgiving goodness.

This recipe can easily be adapted for vegetarians. My suggestion is to omit all meat and instead add fried onion, more bell pepper, and roasted chickpeas (garbanzo beans).

Fry the onion separately in large chunks until lightly caramelized. For the garbanzo beans, coat cooked (jarred/canned) beans in olive oil, sea salt, and paprika and spread on a baking tray. Cook at 350°F (175°C) for about 15 minutes until chewy (not dry). Add both the onion and chickpeas at the end for texture and protein.

To start making migas con chorizo, you’ll need to make your breadcrumbs. Rip your bread into chunks and pulse in the food processor a few times until its in a mix of small breadcrumbs and larger chunks. Then put the crumbs in a large bowl and cover with 1/4 cup of water. Mix with your hands and reserve.

Then in a heavy pan (I used my trusty cast iron skillet) fry the garlic cloves and bay leaves. Once the garlic starts to brown you add the meat, and once everything is browned you remove and reserve.

Next, you’ll fry the peppers in this delicious pork fat. When they’re browned and tender (about 10 minutes) you season with salt and paprika, add back the garlic and meats, add in the bread crumbs and stir frequently to cook and season the breadcrumbs on all sides. You may need to add some extra olive oil and if making for Thanksgiving feel free to add some turkey drippings.

Top with a sprig of rosemary and grapes or pomegranate seeds if you wish.

I love to serve my migas con chorizo as a Spanish inspired brunch dish with a fried egg on top. It is so satisfying! I also make it as my Thanksgiving stuffing recipe. People love it.

If you like this hearty migas con chorizo recipe, try these next time! 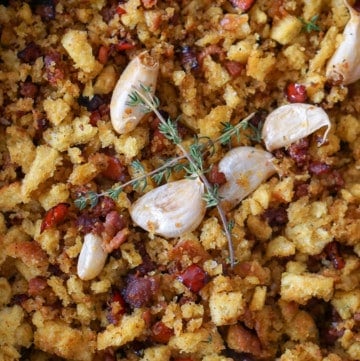 Omit all meat and instead add fried onion, more bell pepper, and roasted chickpeas (garbanzo beans).
Did you make this recipe?Tag @spanishsabores on IG and hashtag it #spanishsabores!

Update note: This recipe was originally published on October 31, 2017 and was republished with new photos and information on January 20, 2021.

What do you think? Will Spanish migas con chorizo make it onto your Thanksgiving table next time? Or perhaps be your next Sunday brunch? Enjoy!