My Spanish lentils have been known to turn any lentil hater into a lentil lover. Read on for my authentic Spanish recipe!

The first time I tried Spanish lentejas con chorizo I was studying abroad in Granada. My host mom, Josefina, served me a heaping plate of hot lentil soup, and proceeded to add a healthy splash of sherry vinegar. My first bite of Josefina’s lentejas was memorable– she wasn’t a great cook, but her lentils were one of the best things I ate during my time in Granada!

Good Spanish lentejas are hearty yet light– they don’t make you feel heavy and sleepy after eating them. The splash of vinegar or pickled toppings is a must in my opinion, as is using a small quantity of excellent quality chorizo (I like spicy chorizo from León — but any will do).

Every Spanish household has its own lentejas con chorizo recipe, and the variations are endless (as are the varieties of Spanish lentils themselves!). The following recipe is my go-to for a simple Spanish lentil soup. I make my lentejas in big batches and freeze the leftovers.

I learned this technique for Spanish lentils while attending culinary school in Spain. It uses two pots instead of only one… but I think the couple of extra steps are totally worth it. My Spanish husband has been eating lentil soups for nearly forty years now — and he claims these are the best he’s ever had!

If you like lentils, bookmark these recipes for next time! 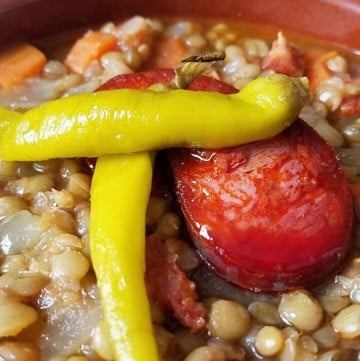 What do you think? Is Spanish lentil soup something you’ll be making this season?