Spain is not only a place to enjoy amazing food and wine, it is a country where the delicacies on the table take center stage. Eating here is anything but a passive routine. Behind each traditional dish are stories of adventure, danger, history and romance.

It’s only by having these unique food experiences in Spain that you can truly discover the full flavor of this incredible country. So next time scrap the big city’s tapas bars chains, skip the packaged beach resorts and dive into the living, breathing world of Spanish cuisine, starting with these 12 epic food experiences in Spain worthy of any food lover’s bucket list.

1. Tagging Along on a Fishing Trip with the Almadraba Tuna Fishermen

Off the southern coast of Cadiz where the Atlantic Ocean meets the Mediterranean Sea, Spanish fisherman have been using the same method of tuna fishing for more than 3,000 years. Invented by the Phoenicians, the art of almadraba fishing sustainably draws giant tuna from the depths using a very specific style of nets. You have to see it to believe it, and tours are possible through specialist companies and at premium prices. You’ll have to wake up before dawn to go along for the ride, but surely it’s worth it!

If the early rise isn’t for you, one Spanish company in Catalonia is allowing guests to experience swimming with bluefin tuna, while learning about these awesome creatures!

2. Touring the Volcanic Vineyards in Lanzarote

Etched into volcanic slopes on the desert island of Lanzarote are some of the most unique vineyards in the world. Three-meter wide holes dug into the black soil protect each vine from the elements and create wines unlike any others. If you love wine, this is one experience you can’t miss.

3. Tasting Sherry out of a Century-Old Solera

It’s nearly impossible to know just how old some of the sherry wines made in southern Andalusia, Spain are. The unique solera system in which wine is aged a pyramid of barrels means that vintages are mixed. Some of the oldest bodegas in the region have soleras that have been in use for more than a century. While the sherry coming out of those barrels may not be 100 years old, we know one thing for sure, it is well (very, very well) aged!

Valencia, along the eastern coast of Spain, is the home of paella. This is where the now world famous rice dish was first invented, and many Spaniards will tell you (especially Valencians) that it is the only place to try an authentic paella. That’s enough to convince me to take a trip!

5. Having Cava for Breakfast in Catalonia

It’s never to early for a glass of wine in Catalonia… as long as it’s cava! This northeastern region of Spain produces more than 235 million bottles of cava. Varying from super dry Brut Natures to extra sweet Dulces, there is a bottle of Catalan bubbly to pair with every meal, even breakfast.

6. Participating in a Traditional Matanza

In the cold wintery months of December and January, families throughout northern Spain pack into old barns for the traditional pig slaughter. For three days every member of the family pitches in to slice, trim, spice and case the chorizos, salchichónes, lomos, jamónes and other cured pork items that they will eat throughout the year. Going behind the scenes of some of Spain’s most prized delicacies is an experience I’ll never forget!

The gnarled behemoths that are Spain’s oldest olive trees dot the dusty groves of northeastern Spain. Some of these olive trees are over 2,000 years old! They produce much fewer olives than their younger brethren, making the oil they do produce that much rarer.

Ever tried eating a spiny sea urchin? How about a raw one? In the southern Spanish town of Cadiz, upwards of 400 kilos of these wicked-looking creatures are slurped down raw during the Erizada. This day-long salute to sea urchins kicks off the Carnaval celebrations in Cadiz each January.

9. Getting Drenched in Wine at the Haro Wine Fight

In the heart of Spain’s most prestigious wine region, chaos breaks loose every June 29th. It’s called the Batalla del Vino, the Wine Fight, and the purpose is to get yourself and everyone around you positively drenched in red wine. Water guns, tanker trucks, buckets, water bottles and even paintbrushes are all fair game in this no-holds-barred battle.

10. Eating “The Best Steak in the World”

It is worth the pilgrimage to the tiny, off the beaten path village of Jimenez de Jamuz to taste the aged steaks at El Capricho. This no-fuss steakhouse was named the home to the best steaks in the world buy the likes of Time, The Guardian, The Telegraph and Traveler Magazine.

11. Finishing Off a Disc of Octopus at Feria

Once or twice per month the villages of Galicia fill with the white tents of the octopus fair. It is under these plastic tents packed with long wooden picnic tables that some of the best boiled octopus in the country is hiding. Simply boiled in giant copper pots and doused in olive oil, paprika and salt, there is no better place to taste octopus in Spain!

12. Tasting Percebes on the Cliffs of San Andrés de Teixido

Stuck to the rocks on the jagged cliffs of San Andrés de Teixido, the highest cliffs in Europe, are one of the most expensive delicacies in the Spanish seas: percebes. These ugly-looking goose barnacles sell for upwards of 100 euro per kilo and are said to taste like the ocean.

What food experiences in Spain do you have on your bucket list? 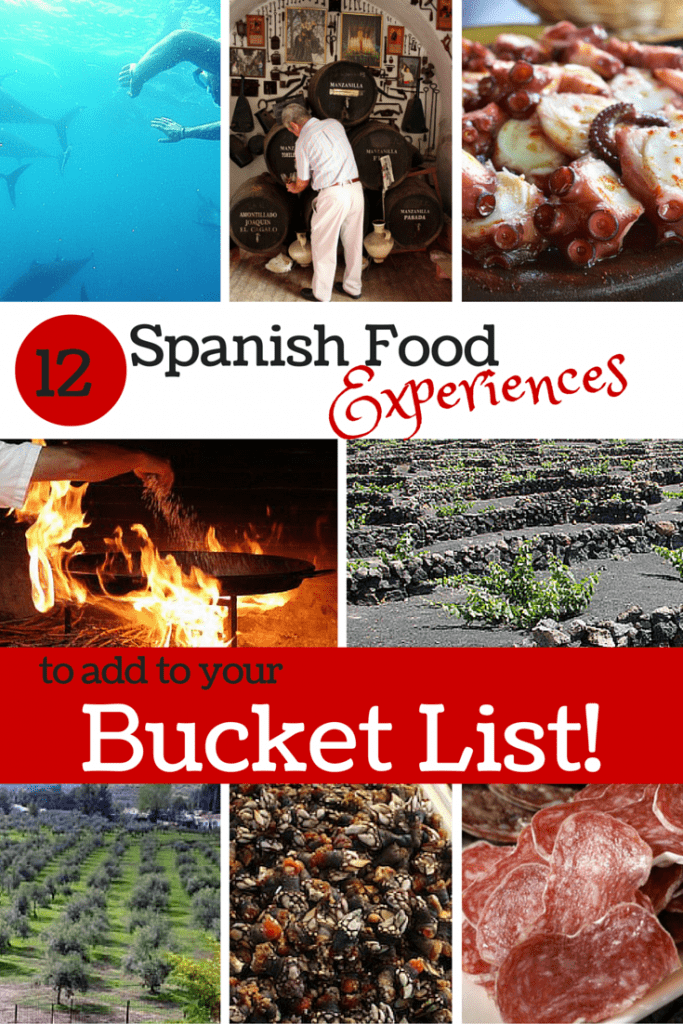