Barcelona’s La Boqueria Market is one of Spain’s most impressive and historic food markets. Colorful and alive, it is a must see stop for anyone visiting Barcelona. It is also the place where I began my fascination with Spanish food.

It was 2007 and I was studying abroad in Granada. Granada was amazing, but as a student, I was surviving mostly on the free tapas served with drinks in most of Granada’s bars and restaurants. Although there were certainly exceptions, most bars offered something inexpensive to make– marinated olives, fried potatoes, Spanish omelet, grilled cheese sandwiches… not Spain’s most impressive cuisine for sure!

Learn More: Where to eat in Granada

La Boqueria: Where I Fell In Love With Spanish Food

Luckily, there were various flights to Barcelona, and I took advantage to visit the city for the first time in November 2007. On my very first day in Barcelona, I realized that Spanish food was so much more than what I had been eating! I walked into the Boqueria market completely by chance, as it was located near the hostel I was staying at. I was amazed by the displays of fresh fruits at the entrance, and I quickly bought two juices. 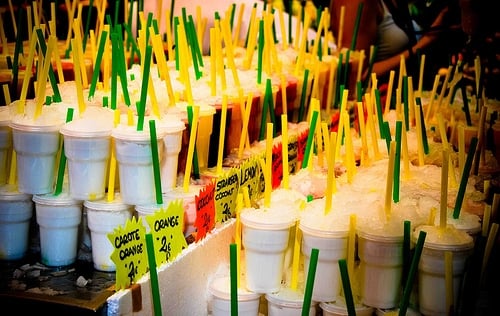 I continued to walk around La Boqueria, admiring Spain’s fresh produce, the variety of fish and seafood, and the dangling poultry. I tried some of the best tortilla de patatas I’ve ever had, made right before my eyes at one of the little bars among the market stalls.

La Boqueria (officially called Mercat de Sant Josep de la Boqueria) is centrally located right on Barcelona’s main tourist street, La Rambla. It dates back to 1217 and has been in its current location since 1853. It is worth visiting for the history alone, but everyone should make an effort to have a tapa or a drink inside the market as well.

The Boqueria Market and Overtourism

Inspired by my love of the Boqueria Market many years after this place changed my outlook about Spanish food, I decided to design a food tour of La Boqueria Market. But it didn’t quite go as planned.

By that point (2017) the market had become too touristy— the crowds were out of control and the authenticity of the market was (and is) at risk. Our tour tried to visit the market in a sustainable way– by limiting groups to only 6 people and visiting right as the market was opening up (around 8am). This allowed us to learn about the market’s history, meet its vendors (and speak with them), and taste its best bites before it got too crowded. We also supported the market with our business, instead of treating it like a monument that’s only made for photos!

But I quickly learned that demand for such an early tour was limited — people wanted to visit at the more comfortable hour of 10am onward. And despite our explanation of why we couldn’t do this, they insisted, and in the end booked elsewhere or chose our popular Tastes & Traditions Tour instead.

It was sad when we finally pulled the plug on this wonderful tour — but it made me think about the complexity of responsible tourism in new ways. It’s an industry I am so passionate about being a part of.

For a long-read (worth your time) check out Matt Goulding’s epic essay about this topic, The Battle for the Boqueria on Roads and Kingdoms.

I would recommend that visitors plan to arrive around 9:00 in the morning (or earlier!) and have a big slice of tortilla (Spanish omelet) for breakfast at one of the market’s various tapas bars. Escape around 11:00 a.m. before the selfie sticks are in full swing.

The Best Places to Eat in La Boqueria

Nowadays the best places to eat in La Boqueria are few and far between. There are many inauthentic, low-quality fast food stands to serve the growing masses of tourists. But the classics live on (and there is a new kid on the block with rave reviews).

The absolute must-eats in La Boqueria market are Bar Pinotxo (Juanito and I are in the photo above) and Quim de la Boqueria. My friend Suzy also recommends Direkte Boqueria, a newbie to the market and a hot seat to snag (there are only a handful of spots at the bar and no menu).

The last time I had an 8:30 a.m. coffee at Bar Pinotxo I struck up a conversation with the man eating beside me. He had ordered stewed beef cheeks and a glass of red wine (later he washed it all down with a shot of brandy). It turns out he used to work for Barcelona’s metro, and during his early morning break he would head over to Bar Pinotxo with co-workers. He’d been coming there for over 30 years, and sometimes his former co-workers joined him too. While I stuck with a piece of Spanish omelet that morning, I will one day brave a heaping esmorzars de forquilla, hopefully in the company of another experienced local!

One of the market’s most popular spots, the energy here is always buzzing. Quim is the owner — he purchased the original tiny bar in 1987. He has now expanded, and offers some of the market’s best omelets and croquettes. But the dish I would go back for again and again is the fried eggs with baby squid. This incredible combination has won the hearts of food critics, famous chefs and TV personalities. While no longer a hidden gem, it’s well worth waking up early for!

What to Buy at La Boqueria

If you are lucky enough to be able to buy and cook with (or take home) any of the following, don’t hesitate.

Spain is arguably the best country in the world for cured meats, and Barcelona is no exception. While most of the jamón comes from other regions (like Salamanca and Huelva) local Catalan cured meats include some of the best sausages you’ll try.

Where? Visit Galiot for amazing quality and friendly service. The Galiot brothers started working together in 1998 when they opened their deli store selling high quality hams and cured meat products in a town just outside the city of Barcelona (Castelldefels) and have been in the ham business ever since. They opened their stall in the famous market in 2017 to expand their business bring their high quality products into the city.

Catalonia is home to excellent cheeses, in fact, the region produces the greatest variety of artisan cheeses in all of Spain– more than 150 kinds!

This was not always the case, as many of them nearly disappeared in the mid 1900s when cheesemakers moved from the countryside to the city to find work. But in the 1970s and 80s, after Franco’s rule (and consequently a time of repression, hunger and misery) many Catalans began to return to these semi-abandoned villages to start from scratch. Most of them would make cheese, as it was one an easy business to start up. The Catalan government even sponsored many of these cheesemakers, as they saw an important opportunity to keep Catalan cheese traditions alive.

Where? Visit Cansaladeria Josep, which specializes in cheese from Catalonia as well as La Mancha. It was opened in 1980 by Isidora, and today is run by her two sons, David and Iván.

Home to over 200 varieties of olives, Spain is the place to truly fall in love with these small fruits. And as the number one producer of olive oil in the world, it’s also the place to pick up some of the best extra virgin olive oils money can buy. Catalonia itself is home to excellent olives and olive oil. There are even some of the world’s oldest millennial olive trees not far from Barcelona!

Where? Visit Olives Francesc, a family run business that has been handed down from generation to generation and has been selling olives in the market since 1947!

Perhaps a lesser known ingredient to tourists, salt cod is one of my favorite things to buy at Spanish markets. If you aren’t able to access a kitchen or bring it home, you can always taste it in a delicious salt cod croquette or a salt cod fritter (buñelo de bacalao).

Where? Visit Bacallaneria, a great stop for all things salt cod. Pick up saffron and paprika too!

Fruit and juice stands crowd the market entrance, and today’s Boqueria sells more juice and fruit salad than kilos of fresh fruit. In spite of this, you can still find excellent produce here. From custard apples (cherimoyas) and persimmons (caqui) in winter, to watermelon and tomatoes in summer, I hope that the Boqueria will always have plenty of fresh fruit and veggies to go around.

Where? For fruit, try Maria Pujol Balbina Ampurdanés (stall 569), one of the most authentic. And for veggies head right outside of the market to the small farmer’s market.

Spain is renowned for its seafood, and the markets in Barcelona showcase some of the very best. In addition to delicacies from the Atlantic (gooseneck barnacles, sea urchin, octopus…) there are local catches from the Mediterranean too. When I was in Barcelona for culinary school, I always wanted to bring a cooler to transport fish from La Boqueria back to Madrid. But I think the other people on the AVE train might have objected!

Where? Wander through the fish section of the market early in the morning. Take care not to block the aisles or bother local shoppers. And please don’t take photographs, unless you’re sure it’s okay. This is a part of the market that is especially struggling with the tourism boom.

Mushrooms are a hugely important part of Catalan cuisine and culture. Every year between the months of September and December, locals head to the forest and scavenge for fungi that grow wildly around the region. The Catalans classify wild fungi (bolets) into 26 different variety groups.

Where? Bolets Petras is the most famous mushroom purveyor around. It’s not uncommon to see a top chef shopping here!

Since that first trip to Barcelona I have returned many times, and each time I make a point to go back to the Boqueria market. I’ll always remember it as the place I truly fell in love with Spanish food.

Have you been Barcelona’s La Boqueria Market? What did you think?

More markets? Check out my full list of must-visit Spanish markets! And all my favorite market tours in Barcelona here!