In this day and age, lots of travelers seek out the best views of a city in order to capture the perfect photo they’ll treasure forever. At the same time, there are still plenty of people who head to these magnificent viewpoints to simply appreciate the view in the moment. There’s value in both, especially when you’re in a city as stunning as Granada! Here’s where to find the best views of Granada that you won’t soon forget.

Where to Experience the Best Views in Granada

Here’s a classic to start things off. The Alhambra is many things: fortress, palace, gardens and so much more. It’s also home to some of the best views of Granada. You’ve got the classic postcard shot of the Albayzín from the Nasrid Palaces. Then, there are the jaw-dropping cityscapes from the top of the Torre de la Vela in the Alcazaba. The latter gives you 360° views of not just the Albayzín, but the historic city center and the Sierra Nevada mountains as well. Come to the Alhambra for the fascinating history and gorgeous architecture; stay for the unforgettable views.

2. Miradores in the Albayzín neighborhood

Looking for an excellent view of the Alhambra itself? Make your way up the steep cobblestone streets winding between the whitewashed houses in the Albayzín. Along the way, you’ll find plenty of unforgettable views of the Alhambra from miradores (viewing areas), terraces and more.

The most popular, the Mirador de San Nicolás, isn’t quite the city’s best-kept secret anymore and can get quite crowded. Instead, head to a lesser-known point, such as the Mirador de San Cristóbal, for equally amazing views with a fraction of the crowds. If you get hungry, grab a bite to eat at one of the many incredible restaurants in the Albayzín, many of which also share one of the best views of Granada!

Its flamenco venues may be on the touristy side, but the storied Roma quarter of Sacromonte is still worth a visit—especially if you’re seeking out the best views of Granada. It’s a steep walk up, but not unpleasantly so. When you arrive, you’ll be rewarded with picture-perfect views of the city at your feet. To catch the absolute best views, make your way to the hill above the Sacromonte Caves Museum (Barranco de los Negros, s/n), where you can watch evening blanket the Albayzín at sunset.

If you don’t mind a bit of a hike, the views from Mirador de San Miguel Alto are totally worth it. As the highest point in the city, there’s no doubt that it also offers the best views of Granada. This sacred spot is the destination of a holy pilgrimage that leaves the Albayzín every September, and locals consider it sacred. The calm, tranquil atmosphere coupled with the outstanding panoramic views of the city and surrounding mountains make this a must for visitors looking to get off the beaten path.

Rounding out our lineup of the best views of Granada is a small, nondescript viewing point you might come across on your way up to the Alhambra. Granada’s tourism board refers to this spot, located near the parking lot along Avenida Santa María de la Alhambra, as the “Mirador de Granada.” It’s a relatively quiet, low-key place where you can get some of the best views of the city and its gorgeous natural surroundings. It’s an especially convenient option if you’re exploring Granada by car. As a bonus, it’s right next to Casa Paco (Avenida Santa María de la Alhambra, 5) where you can enjoy equally stunning views from the terrace along with a home-cooked meal or drinks!

See Also: Discover the best places to watch the sunset in Granada! 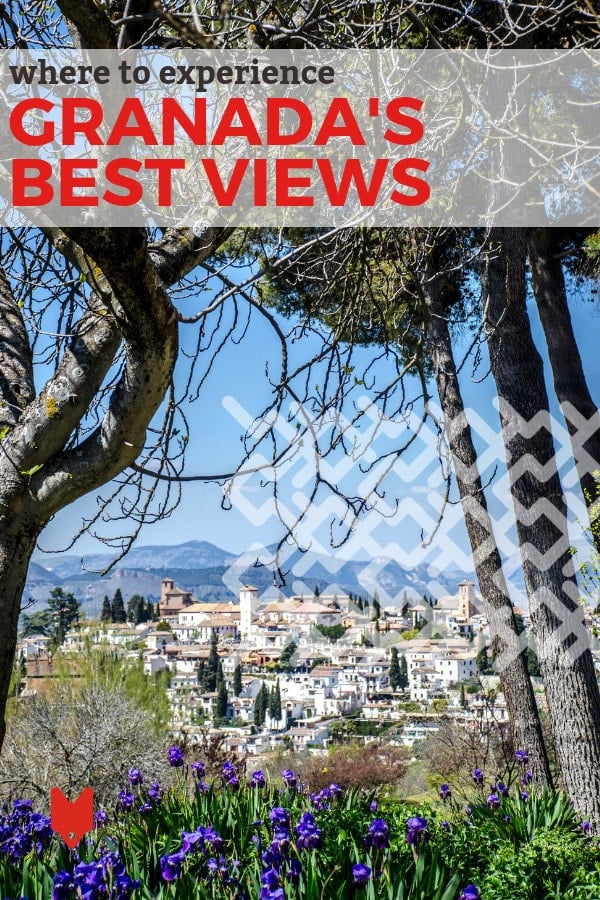