When people think of fish markets, their minds understandably wander to busy port cities such as Tokyo, Sydney, or Singapore. Few people would ever imagine that landlocked Madrid is home to the second biggest fish market in the world, second only to the enormous Tsukiji Fish Market in Tokyo, Japan. And while in Tokyo tourists make their way in and out of the giant market (with a certain number of tourists per year often permitted to see the early morning tuna auctions), in Madrid entry to the enormous Mercamadrid is limited to employees and buyers only.

When a blogger friend of mine asked me if I’d like to take her place on an early morning tour of Mercamadrid, I jumped at the opportunity to sneak behind closed doors and see what the second biggest fish market in the world (and also the biggest market in Europe) looked like on the inside.

My alarm was set for 3:30 a.m. and as I stumbled out of bed to catch a taxi I began to second guess my decision to join this strange excursion. I arrived to the Ministry of Agriculture to meet the rest of the group, lead by the General Director of Food Industries in Spain, Fernando Burgaz, and the owner of one of the city’s best fruit shops, Luis Pacheco of Gold Gourmet. Among the journalists were correspondents for magazines like Elle and the Spanish version of Zagat guides, the Guía Metropolí.

We boarded our bus and set off for the market. Only a 10 minute drive, Mercamadrid is located on the outskirts of the city. It was only 4:00 a.m. but we were soon backed up in traffic, as we were arriving at peak hours. We finally made our way in to the complex, and the first order of business was suiting up– there was no doubt that we were the outsiders.

Our first stop was the world famous fish market. As we entered, the first thing that struck me was that it didn’t smell like fish. I was also surprised to see that a lot of fish came in frozen. Lastly, I noticed that the fishmongers were all men— not even one woman graced the floor.

As we walked around photographing these early birds in their glory, I wished we could have tasted the beautiful tuna before us– then again, I knew it was for the best I couldn’t (see below).

Bluefin tuna has been fished in Spanish waters for many years, and unfortunately it should probably be stopped at this point. As fishermen often catch the tuna before it has had the chance to reproduce, the species is disappearing quickly. Last year regulators stopped the fishing season early in both Spain and France (although that certainly didn’t stop everyone) and conservationists are seriously worried.

Read more about the issues at Slow Fish.

Breaking Down a Bluefin Tuna at Mercamadrid

Watch as this strong fishmonger chops up the tuna– doesn’t look easy!

The meat market was much more modern and less exciting. Each wholesaler had their shop and storage areas. Everything was as clean as could be– and again, there was no smell whatsoever. As we walked through the chambers where pigs, lambs, and cows were hanging I felt an immense respect for these animals, and it was obvious that the professionals working with them did as well. I am a big believer in limiting my daily meat consumption, and making educated decisions when I do consume. While it isn’t always possible, especially travelling so often, this tour only reinforced the desire to know where my meat comes from.

The sun was peeking through the clouds as we made our way over to the produce area. Fruits and vegetables perfectly waxed and boxed were towering in all corners. Again, the hygiene was incredible. Fruit shops all around the city would soon be supplying their neighbourhoods with the bounty before us– but I found myself missing that disorderly market feel.

After our tour we were invited to a breakfast in one of the market’s conference rooms. I don’t know why they called it breakfast, as this 9:30 a.m. meal was more like a Thanksgiving dinner! Featuring an enormous spread of products from the market, we tried all sorts of meats, cheeses, hams, and even foie gras. It is probably the first and last time I’ll have foie gras for breakfast…

I feel very lucky to have gotten an insider’s peek into the inner workings of Mercamadrid. I respect the people who wake up so early each day to provide food to the masses. I also appreciate the respect that these people show the animals they are working with. Given the popularity of Tokyo’s fish market, I think it would be an incredible tourism initiative to one day make the market accessible to adventurous tourists. Food tourism is only growing, and I guarantee people would be interested.

What about you? Would you like to visit Mercamadrid? 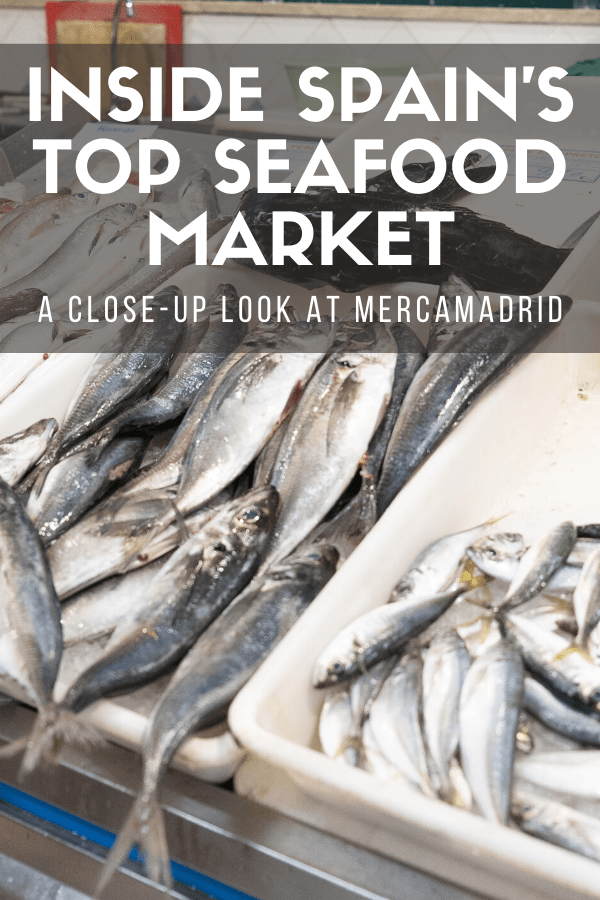