Today David takes on a controversial dish — Spanish seafood paella! Read on to discover how to make the perfect paella for seafood lovers.

Want help making this delicious dish? Join our new Online Paella Cooking Class! You’ll join a Spanish home chef over Zoom for an hour of cooking and conversation about Spanish food and culture. And you’ll end up with the perfect paella of course! Classes are only 19€ per screen (so bring the whole family) and offered in English several days a week. Private classes are also available if you’d like to host a group of friends or family members!

When I talk to travelers visiting Spain for the first time, they always ask the same thing.

“Where’s the best paella in town?”.

No dish is as synonymous with Spanish cuisine as this big plate of fragrant, saffron-infused rice served up at tables around the country. But unfortunately, a good paella is hard to find! That answer always leads to confused stares and even a handful of tears. 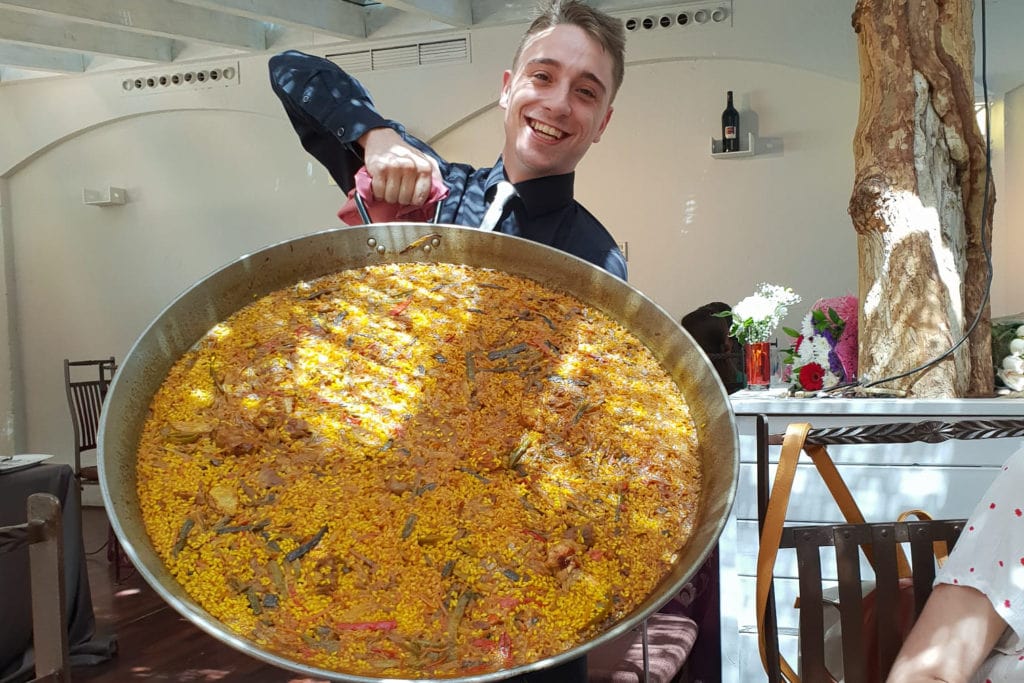 But it’s true! In many Spanish cities, you’re going to find it hard to find a seriously tasty paella. Why?

Let’s get one thing straight. Paella is only from a small part of Spain. Purists argue about its exact origins; debating all up and down the east coast of Spain. It’s true that the paella Valenciana is the most traditional version, but it tends to not be the one visitors to the country want to eat. Owing to the history of paella as a peasant field dish, the classic recipe is full of meats like chicken, rabbit, eel, and even snails!

Luckily for us, the most famous version is the seafood paella. Popularized less than two centuries ago on the sunny beaches of Valencia and Barcelona, this is the pan of rice that the world fell in love with. Apart from beautifully fresh fish, prawns, squid, mussels, and clams, the real treasure of seafood paella is the rice.

Plumped up with a delicious, saffron, and seafood broth, the rice is a taste sensation all on its own!

It’s All About the Socarrat

The mark of any decent paella is the socarrat. This is the dark, crispy underbelly of the rice, the layer on the bottom that almost burns as the stock evaporates from the pan. Unlike risotto, paella doesn’t need stirring while it’s cooking. You’re looking for individual grains of rice, not a creamy conglomerate. This means that as the pan (called, confusingly, a paella) dries out, the lowest layer of rice will go black and crunchy.

If a waiter serves you blackened rice when you order paella, don’t complain. In fact, thank him! This is the best part of the dish, the bit that gives texture and rich caramelized flavor.

How to Make the Perfect Seafood Paella

To make this seafood paella, make sure to start with the right kind of rice. Bomba rice is the grain of choice for most Spaniards, but it can be hard to find in other countries. If you can’t get hold of it, don’t worry; any short-grain rice will be acceptable.

Since the flavor of the rice is going to come from the broth, it’s best to make your own if you have time. If you can’t, just buy the best seafood broth available that fits your budget. Lastly, let’s talk about saffron.

Yes, it costs more than any of the other ingredients in this recipe. Yes, it’s hard to find. But it really is the thing that takes your paella to the next level! Aside from the taste and aroma, it will give your rice that beautiful golden glow that you just can’t replicate with food coloring (no matter what the cheap tapas bars on the Costa del Sol tell you).

You can also pre-prepare your sofrito (the base of the dish) in advance. I like to whip up a big batch of sofrito and use it throughout the week in a variety of Spanish dishes. See my standalone sofrito recipe here!

Now let’s get to your classic Spanish seafood paella recipe. 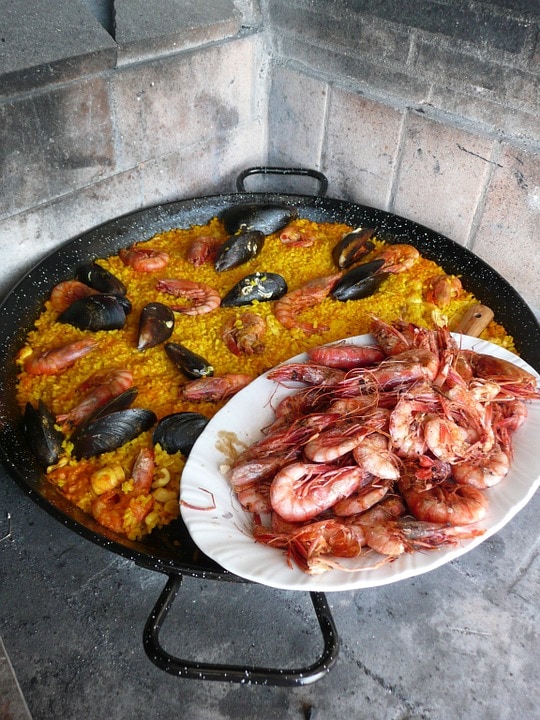 Print
Prep time
10 mins
Cook time
30 mins
Total time
40 mins
This classic Spanish seafood paella recipe will get you a plate of rice every bit as delicious as the stuff served in tapas bars from Barcelona to Valencia! Just make sure to bring an empty stomach.
Author: David Pope
Recipe type: Main
Cuisine: Spanish
Serves: 4-6 servings
Ingredients
Instructions
Notes
1. The ideal rice for paella is "Bomba" rice, but if you can't find it, any short-grain rice will do.
2. A paella pan is a special frying pan for making paella. If you don't have one (very likely if you don't live in Spain), use your largest, flattest skillet.
3.5.3251

What’s your favorite type of paella? Do you prefer the trendy seafood version or the classic, snail-filled paella Valenciana? Let me know in the comments below!