×
Home / Blog / Granada / 10 Days in Granada: How to Live Like a Local in Andalusia’s Moorish Gem

Granada may be a relatively small city, but spending 10 days here will truly immerse you in the culture and make you feel like a local. Sure, you could probably see the main sights in a few days, but you won’t really have scratched the surface of what it really means to eat, breathe, sleep and live the local culture.

Slow travel has been making waves in the international community as more and more people are embracing the idea of becoming temporary “locals” rather than just tourists. Sound good? This itinerary for 10 days in Granada will show you all the most important sights most visitors clamor to see, but it will also take you off the beaten path into the hidden corners only granadinos know—so get packing!

The Ultimate Itinerary for 10 Days in Granada

Take the first part of your day to simply relax and take it easy. If you’re coming from far away, you might be pretty tired from the trip! Indulge in Spain’s famous siesta or take a leisurely walk around your neighborhood. With a full 10 days in Granada, you’ll start to feel like a local resident in your barrio before too long.

Once you’ve gotten your bearings, it’s time to dive right in and join the granadinos on an evening tapas crawl. Look out for places that seem to be popular among locals, and don’t be afraid to ask for recommendations if you’re not sure what to order. Tapas culture is an integral part of experiencing Granada, and you’ll want to make the most of every meal.

It might not come as any surprise that the second of your 10 days in Granada is exclusively dedicated to visiting its most iconic monument! You’ll easily need half a day to visit the main sections of the Alhambra, but exploring the hidden museums and enjoying a meal at one of the great nearby restaurants will give you enough to do for the whole day. Just remember to book your tickets online in advance so you don’t show up and and find that the Alhambra is sold out!

Most people who visit the Alhambra want to visit the gorgeous Nasrid Palaces. When you book your ticket, you’ll be asked to select an entry time for the palaces. Keep in mind that you’ll only be able to access the palaces at that time, but in the meantime, there’s still plenty more to explore at the Alhambra that will take your breath away. The calm tranquility of the Generalife gardens is brought to life by bursts of colorful flowers, which look especially beautiful in the spring. Head over to the Alcazaba and you’ll be rewarded by breathtaking views of the Albayzín from the tops of the towers.

When you’ve finished exploring the main parts of the monument, don’t forget about the museums! The Palace of Carlos V is a gorgeous structure itself, but it also houses two fascinating museums: the Alhambra Museum and the Museum of Fine Arts. Both are small but endlessly interesting and well worth a visit.

You’ve seen the stunning views of the Albayzín from the Alhambra, now take some time to explore this charming ancient neighborhood studded with whitewashed houses! Start off at the Church of San Salvador (Placeta de Abad, 2), where you’ll notice both Moorish and Christian elements in the architecture. This is a result of the church’s construction on the site of Granada’s 9th century mosque!

From there, make your way to Plaza Larga, the epicenter of life in the Albayzín. In the morning, check out the produce market, where local farmers sell their fresh fruits and vegetables. If you’re lucky enough to be visiting on a Saturday, you’ll also get to see the beautiful flower market! Even if there’s nothing going on in the plaza, this emblematic square is a great place to sit and people-watch, getting a sense of local life.

Many guidebooks will tell you to enjoy great views of the Alhambra from the Mirador de San Nicolás. While the views are stunning, the plaza’s popularity means it’s often packed with tourists. Instead, head to the nearby Mirador de San Cristóbal for the same view with less crowds.

In the evening, head to the Sacromonte caves and explore another one of the city’s most historic neighborhoods. The Sacromonte Caves Museum (Barranco de los Negros, s/n) will give you better insights into the history and culture of this unique barrio. Plus, it’s one of the best places in town to watch the sunset!

On the fourth of your 10 days in Granada, start your adventure at Puerta de Elvira. This imposing gate was the main entrance to the city during the Moorish period, and today serves a great starting point as you make your way down Calle Elvira. This street holds a fascinating past and present: it was the main thoroughfare through Moorish Granada, and today remains one of the most iconic streets in the city.

When you reach Plaza Nueva, take some time to admire the bustling surroundings of one of the most important squares in the city center. Continue onto adjacent Plaza Santa Ana and finally onto the Carrera del Darro. This lovely street running parallel to the Darro River (which runs mostly underground through the city!) marks the unofficial southern border of the Albayzín and features plenty of outstanding sights and gorgeous views.

As you continue east, Carrera del Darro eventually becomes Paseo de los Tristes. This stretch of road gets its name (“Promenade of the Sad”) from the fact that it was part of a common route for funeral processions back in the day. Luckily, today it has a much more upbeat and joyful ambiance and is one of the liveliest areas of the city. It’s the perfect place to continue your stroll into the evening and pop into a tapas bar from there!

You’re halfway through your 10 days in Granada! Why not escape the city for a little bit and enjoy a day trip from Granada? Its central location within Andalusia means it’s possible to get to some of the most beautiful parts of the region in the blink of an eye.

A great pick for your first day trip: Las Alpujarras. Once the Catholic Monarchs took over in the fifteenth century, they ousted the Moorish inhabitants of Granada. Many returned to north Africa, but some moved to this gorgeous mountain settlement just 70 kilometers from the city, and Moorish influences still remain clearly evident in the villages in this region even today. In addition to incredible local culture and views that look like a postcard, this region is also foodie paradise, and home to some of the most typical foods from Granada province such as the best cured ham in Spain and a warm, hearty plate of eggs, potatoes and meat known as plato alpujarreño.

Start the sixth of your 10 days in Granada with a peaceful stroll in the Jardines del Triunfo. These peaceful gardens just north of the city center offer calm tranquility just blocks away from the hustle and bustle of modern Granada.

Continue a little ways south and let yourself be blown away when you step into the Basílica de San Juan de Dios (Calle San Juan de Dios, 15). If you thought European churches were ornate before, you haven’t seen anything yet—the luxurious baroque interior of this basilica is covered practically top to bottom in lavish gold. When you’ve been sufficiently awed by this stunning church, the nearby St. Jerome Monastery (Calle Rector López Argueta, 9) is worth a visit as well.

Bookend your day by exploring another of Granada’s many gorgeous parks. The Botanical Garden (Calle Duquesa, 13) is a romantic and historic green space nestled into a cozy corner beside the university. From here, you’re easily within walking distance from the city center for a tapas crawl—or stay in the park and enjoy an evening picnic!

The first week of your 10 days in Granada has finally come to an end! It’s time to explore some of the most iconic sights in the city center itself. First and foremost: Granada’s imposing cathedral (Calle Gran Vía de Colón, 5). As the fourth largest cathedral in the world, every corner of this stunning church will blow your mind. Don’t miss the Royal Chapel (Calle Oficios, s/n) just around the corner, either. It’s no less awe-inspiring than the cathedral and houses the remains of the Catholic Monarchs.

After exploring a bit of Christian Granada, go even further back in the past to the Moorish days. Not far from the cathedral, you’ll find Corral del Carbon (Calle Mariana Pineda, s/n). This Moorish building dates back to the 14th century and once housed a coal yard and warehouse. After the Christian reconquest, it began a new life as a sort of theater venue. All in all, it stands out as the oldest Moorish monument left in the city.

By this point, you may be a little worn out from sightseeing. Luckily, you’re in the perfect position to go shopping! Two of Granada’s central streets, Reyes Católicos and Recogidas, are lined with dozens of incredible shops. Peek down the side streets for even more cute boutiques and hidden gems!

You’ve seen the mountains, now it’s time to hit the beach! That’s right–both are possible and easily within reach of Granada! Spend the eighth of your 10 days in Granada escaping to the lovely Costa Tropical running along the southernmost edge of the province.

There’s so much to be said about the fabulous beaches in Spain, but the coast of Granada has something special. For one, many tourists overlook it in favor of bordering provinces Málaga and Almería, and as a result, it retains its old-world charm as a humble fishing region. The idyllic whitewashed houses of the coastal villages stand out gorgeously against the backdrop of the Mediterranean. It makes for a picture-perfect escape from the city, allowing you to relax and unwind.

As your 10 days in Granada draw to a close, be sure to pay tribute to one of the city’s most famous sons. Just southwest of the city center, you’ll come to Parque Federico García Lorca (Virgen Blanca, s/n). The park pays tribute to the granadino writer of the same name and is a lovely place to spend a relaxing morning. One of García Lorca’s family’s homes, the Huerta de San Vicente, stands in the center of the park. Today, it houses a small but fascinating museum dedicated to his life.

A little ways away from the park, you’ll find another one of the best museums in Granada: Parque de las Ciencias (Avenida de la Ciencia, s/n)! As the first interactive science museum in Andalusia, it holds hundreds of fascinating hands-on exhibits. Kids and adults alike will have a blast getting up close with science!

What better way to spend the last of your 10 days in Granada than by enjoying its biggest and most beautiful park? The Dehesa del Generalife, a protected environmental area not far from the Alhambra, fits the bill. With nearly a dozen kilometers of trails, hundreds of plant and animal species, and sweeping views of the city, it’s the perfect spot to end your stay in Granada. You might even come across some Moorish ruins as you make your way through the park!

See Also: Pick the perfect home base with this guide to where to stay in Granada. 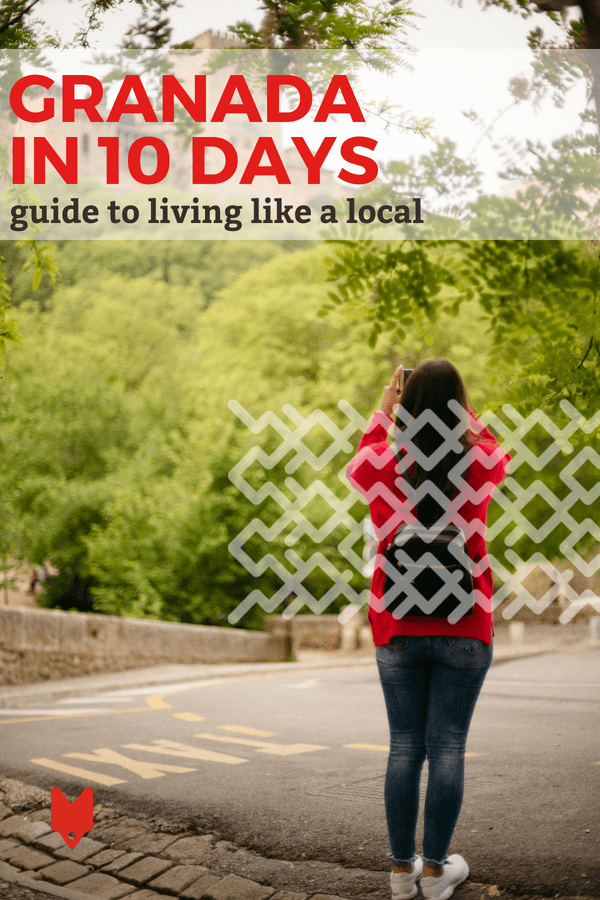