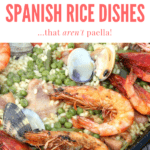 When most people outside of Spain think of Spanish rice dishes, paella usually comes to mind. And not just any paella—preferably one piled high with fresh seafood.

But while you can find authentic versions of seafood paella here in Spain, it’s not the end-all-be-all of Spanish rice dishes.

In fact, throughout the country, you can find scores of equally tasty recipes that highlight Spain’s famous rice by pairing it with local ingredients and cooking techniques.

Many visitors to Spain can claim to have tried paella. When it’s done right, paella can be one of the most unforgettable things you’ll eat in Spain. Each grain of rice is packed with tons of flavor, and the crispy layer of socarrat (more on that later!) gives it the perfect final touch.

But if you’re looking for a truly authentic experience, consider ordering one of the dozens of other Spanish rice dishes out there. As a bonus, some of these are difficult to find outside their home region, so you can rest assured that they’re the real deal. (And if you’re not in Spain just yet, no worries—we’ve got you covered with recipes!)

History of Rice in Spain

As with many other now common Spanish ingredients, we have the Moors to thank for bringing rice to Spain.

Starting in the 8th–10th centuries AD, the people of Al-Andalus began planting rice along the Guadalquivir and Guadiana rivers in what are today the autonomous communities of Andalusia and Extremadura. The practice soon spread to eastern Spain’s Levante region (including the modern-day Valencian Community)—the area that is today most strongly associated with Spanish rice cultivation.

Rice plantations began to expand thanks to improved irrigation systems in the 11th century. However, it was still pretty difficult to grow, and thus only accessible to the higher classes in Spain throughout the Middle Ages. It was around this time that one of the first recipes involving Spanish rice was recorded: a medieval version of blancmange in the Catalan-language cookbook Llibre de Sent Soví.

The cultivation of rice in Spain began to decline after the Christian Reconquest due to beliefs that it was a “Muslim” food. However, population growth on the Iberian Peninsula in the 18th century resulted in a resurgence in demand for many crops—rice being one of them.

Over the next few centuries, rice gained more and more importance for the Valencian economy, thanks in part to new mechanical equipment that made planting and harvesting rice crops easier.

There are two key varieties you need to be familiar with when it comes to making Spanish rice dishes: bomba and calasparra.

What’s special about these varieties is their ability to absorb liquids. They can suck up three times as much liquid as a normal long-grain rice without breaking down. When cooked correctly, bomba and calasparra rice should be extremely flavorful, but perfectly al dente.

If you can’t find bomba or calasparra rice near you, you can substitute any round, short-grain variety. Arborio is a good option but is starchier than the Spanish varieties, which can change the outcome of the dish slightly.

We’ll talk about more Spanish rice dishes in a bit—but before we do, let’s clear up some confusion as to what paella is.

The definition of paella can vary depending on who you ask. In general, though, a Spanish rice dish needs to check a few specific boxes in order to be considered a paella.

Most Spaniards would agree that a true paella must:

Traditionally, the original paella recipe (from Valencia) included chicken, rabbit, snails (though these are used less frequently today), green beans, and local garrofón beans. Some purists will still argue that this is the only true form of paella! However, seafood-based and even vegetarian versions are now available at most arrocerías (restaurants specializing in rice dishes) throughout Spain.

If you want to know more about Valencia paella, check out WikiPaella — an initiative to protect and promote the classic rice dishes of the Valencian region.

In no particular order, here are 12 excellent Spanish dishes with rice to keep on your radar.

Paella is, undoubtedly, the best-known Spanish rice dish across the world. That said, not all paellas are created equal—not even in Spain!

Many restaurants—even some that are otherwise good—know that tourists are eager to try paella, so they draw them in with bright posters and signs featuring it outside their establishment. If you see these, beware: Those paellas are frozen, reheated, and often not homemade, and locals never order them!

Good paella takes time (and often space, to accommodate the large pans) to cook, which is why many restaurants are unable to offer it regularly. Instead, many eateries will offer a rice special one day per week.

Look for signs that say “Tenemos paella hoy” (“we have paella today”), or something along those lines. If you can spot the big paella pan they’re using to cook it in, even better.

Another great option is to go to an arrocería. These are restaurants that specialize in Spanish rice dishes like paella, so they definitely know what they’re doing.

Some great versions of paella to look out for on the menu are:

Arroz negro—literally, “black rice”—starts with white rice. So how does it get its signature dark color? The answer: squid ink.

Not only does this contribute to the aesthetic quality of the dish, but it also serves to enhance the flavor of the seafood. While recipes can vary, the rest of the ingredients are all quite simple (think fresh produce and seafood), and reflect the beautiful and humble roots of Spanish cuisine.

And of course, arroz negro isn’t complete until you’ve topped it with some homemade alioli!

While paella is dry—every last drop of liquid having been soaked up by that mighty bomba rice—arroz caldoso falls on the opposite end of the spectrum.

If you speak Spanish, you’ll see that the name speaks for itself. Arroz caldoso is soupy, brothy rice, most commonly prepared with fresh seafood. The secret ingredient is the broth itself—a homemade fish stock is a game-changer here!

Tucked in between the Valencian Community and Andalusia on southeastern Spain’s Mediterranean coast is a sun-drenched gem of a region that’s often not on most tourists’ radar.

But don’t count Murcia out simply because you haven’t heard of it. This often-overlooked corner of Spain has a lot to offer, including lovely beaches, a warm and welcoming local culture, and a gastronomic scene that gives its better-known neighbors a run for their money.

Arroz al caldero is one standout of Murcia’s culinary repertoire. Particularly popular in the coastal areas of the region, it masterfully combines ñora peppers and freshly caught seafood into a flavorful stock, where local rice simmers to perfection.

The result: a soupy Spanish rice dish that’s the epitome of coastal comfort food—and which is especially delicious when topped with a dollop of homemade garlic mayonnaise.

Arroz meloso falls somewhere between paella and arroz caldoso on the soupiness spectrum. It’s far from dry, but with just enough liquid to give it a creamy, comforting touch. These Spanish rice dishes are similar to a risotto in texture and require a bit of skill to get the rice cooked perfectly!

As the story goes, Valencian fishermen traditionally made a sort of seafood and potato stew using the fish they were unable to sell. They later took the leftover liquid from that dish and used it to cook rice. That’s how arròs a banda (Valencian for “rice on the side”) was born—from the rice dish that was served alongside the stew.

Arròs a banda (arroz a banda in Spanish) looks similar to paella due to the fact that it’s often prepared in the same wide, flat paella pan. A hearty dollop of alioli adds the perfect complement to the fresh seafood flavors.

Valencia, as you might have noticed, does some pretty spectacular things with rice. In addition to paella, arròs a banda and more, it’s also home to arroz al horno, or baked rice.

Originally developed as a way to use up the leftovers of the previous day’s cocido, or stew, arroz al horno is one of those “everything but the kitchen sink” types of dishes, combining a variety of ingredients in a way that just somehow works. Common additions include garbanzos, morcilla (blood sausage), and bacalao (salt cod). (But really, there’s no right or wrong way to make this one!)

Another one of the most famous Spanish rice dishes abroad, versions of arroz con pollo are hugely popular in Latin America as well. It originally developed in Spain and made its way to the New World over the years.

Chicken and rice are the star ingredients, but from there, you’ll find as many recipes as there are cooks in the Spanish-speaking world. Here in Spain, you’ll find hundreds of variations using different veggies, spices, and extra touches such as white wine or lemon.

Arroz con costra is one of the hidden gems of the Spanish rice world. It’s also one of the oldest Spanish dishes with rice ever recorded—a recipe dating from the year 1220 still exists!

What makes arroz con costra unique is its glossy top crust of beaten egg, giving it a smoother surface than most other Spanish rice dishes. Most recipes involve starting the dish on the stovetop, then moving it to the oven near the end (after the egg is poured over top) to set the crust.

A favorite among children throughout Spain, arroz a la cubana is rice smothered in plenty of tomato sauce (preferably homemade). It’s often served with fried eggs and plantains or bananas.

Yes, this one is a little bit of a stretch, considering there’s no rice at all in fideuà. But if you’re looking for an equally tasty and authentic alternative to paella, you can’t go wrong with its noodle-based cousin.

In addition to the tiny, buckwheat noodles that set it apart from paella, fideuà also contains plenty of flavorful seafood. Recipes can vary, but shrimp, cuttlefish, calamari, and monkfish are common additions. Just don’t forget the alioli!

Ready to try some of these incredible dishes for yourself? Here are some easy and delicious Spanish rice recipes to get you started.

What is the difference between Spanish rice and Mexican rice?

This is often the source of much confusion, given the fact that “Spanish rice” is often used in the US to refer to a Mexican dish! This rice dish, known as arroz rojo in Mexico, gets its signature red color from tomatoes. In Spain, on the other hand, saffron is more commonly used to give color and flavor to rice dishes.

What rice varieties grow in Spain?

In addition to the popular bomba and calasparra rices, other varieties grown in Spain include bahia, tebre, sénia, fonsa, montsià, and albufera.

What kind of rice do you use for Spanish paella?

The secret to Spanish paella is using a short-grain rice with the ability to soak up tons of liquid. Bomba and calasparra are the most commonly used varieties in Spain.

Where can I buy Spanish rice for paella?

You’ll likely find paella-friendly rice at any store near you (or online!) that stocks Spanish food products. If you’re in the US, La Tienda stocks both bomba and calasparra rice. (They even have paella pans, too!)

Update Notice: This post was originally published on July 9, 2019 and was republished with new text and photos on March 24, 2021.