×
Home / Blog / Granada / Where to Propose in Granada: 5 Spots You’ll Fall in Love With

It’s hard not to fall in love with Granada, from its storied cobblestone streets to the exquisite detail in what remains of its Moorish architecture. Such a storybook setting makes for the perfect place to take that magical next step in your relationship. If you’re looking for where to propose in Granada, you certainly have plenty of options, but there are a few that will take the romance and beauty of the moment to the next level. Get ready for a moment you’ll never forget among one of the most romantic backdrops in Spain!

Where to Propose in Granada

These lovely gardens just next to the Alhambra are often overlooked in favor of the gigantic monument itself. That means that they’re calm, peaceful, and the answer to where to propose in Granada for a truly special moment. You and your partner will feel like the only two people on earth in this magical setting, which looks like something straight out of a fairy tale. For extra romance points, be sure to go at sunset!

Another fabulous option for where to propose in Granada, the Parador restaurant and hotel features a stunning view of the Alhambra itself. Set the scene by booking a table on the outdoor patio overlooking the Generalife gardens. As the sun goes down, you’ll have reached the perfect moment to pop the question! Order a bottle of bubbly cava to celebrate the special moment.

Everyone loves Granada’s famous Mirador de San Nicolás—in fact, it’s probably the city’s worst-kept secret. While the views of the Alhambra are undoubtedly amazing, the touristy crowds make it a not-so-great place for where to propose in Granada, especially if you want to be alone. Head to the Mirador de San Cristóbal instead for a similarly stunning view with a fraction of the people. It’s a bit of a hike from the city center, but makes for quite a romantic couple’s walk as well.

Las Tomasas is another fabulous restaurant that doubles as a great place for where to propose in Granada. Both the elegant interior setting as well as the stunning outdoor terrace would be perfect places to pop the questions. Enjoy unbeatable views of the nearby Alhambra for the perfect backdrop in this unforgettable moment. As a bonus, the food here is fabulous, too!

If you’re already in Sacromonte to catch a flamenco show, take advantage of your unique setting! The lovely tiered gardens at the Museo Cuevas de Sacromonte make for one of the best places for where to propose in Granada. Walk up the picturesque stone steps and take some time to admire the views along the way, each more spectacular than the last as you get higher up.

See Also: The Most Romantic Restaurants in Granada 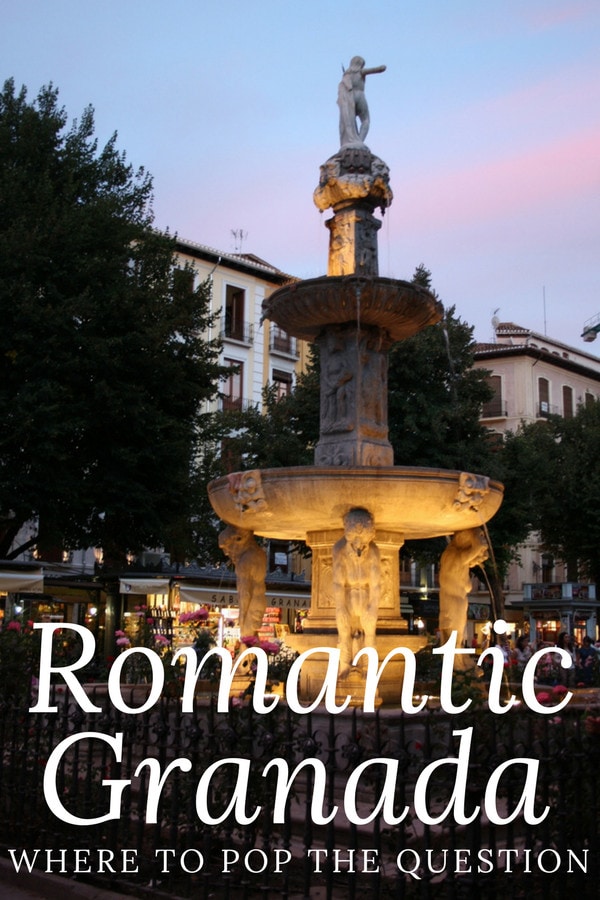