Home / Blog / Dining out in Spain / Spanish Mealtimes: When do Spanish people eat?

As the second part in my Dining Out in Spain series I present the difficulty of the Spanish mealtimes, a challenge I was faced with when I first arrived in Spain but (luckily) have been able to adjust to in the past few years!

When I first arrived in Spain as a language assistant it was really difficult to adjust to the new eating schedule. Although I’d studied in Spain before, I just couldn’t get used to eating the Spanish way on my own.

So how do the Spaniards eat? Well, it really depends on whom you ask. But I take the following to be a general consensus. Let me know if you disagree!

Breakfast (El Desayuno): Around 7:30 am. Right before going to work a typical Spaniard might have a cup of coffee and perhaps a small piece of toast with butter and jam or a small bowl of cereal. Some don’t eat at all.

Mid-morning Snack/The “Real” Breakfast: Most companies give their employees a break around 10:00 am in which the average Spaniard will go have their “real” breakfast or at least another coffee. They usually eat a piece of toast with either butter and jam, or olive oil and tomato. Some prefer a croissant or pastry, and in Andalucía olive oil, tomato, and Serrano ham is a delicious and popular choice. The strangest tostada toppings include colored lard and strange pates. You can read more about Spanish breakfast at Hayley’s blog!

Lunch (La Comida): Most Spaniards still think of lunch as the main meal of the day, whether or not they have the option of going home to eat with their families. Lunch is almost always a hot meal and many bars offer a menu of the day (menú del día) that consists of an appetizer, main dish, beverage, and dessert.

Afternoon Snack (La Merienda): As I explained previously this is like Spain’s “fourth meal”. Usually people have it between 5:00 and 6:30 in the evening, although it can be eaten just about any time before dinner. Typical afternoon snacks can be on the sweet side, such as coffee and a pastry, a yogurt, or fruit, but can also be savory snacks like a small sandwich and soda, or some cheese and Serrano ham or chorizo.

Dinner (La Cena): Depending on who you ask, dinner ranges from light fare like a yogurt and some fruit, salad, a bowl of cereal, or some cheese and crackers, to heavier meals similar to what one might eat at lunch time. In the south people love to go for a tapa or two for dinner which will definitely fill you up without being too heavy (if you stop at one or two that is!).

I personally appreciate each and every Spanish meal and what it offers.

What I would order:

Lunch: An ideal menú del día would be a bowl of refreshing salmorejo followed by solomillo al whiskey or secreto ibérico (a delicious cut of Iberian pork).

Merienda: A café cortado and a dulce árabe (like baklava, common in Spain due to its Moorish past).

Dinner: Tapas for sure although exactly what depends on my mood! Croquetas are always delicious, fried eggplant with honey, baked goat cheese with jam… there are endless possibilities!

What do you guys order when you go out? For the expats—do you cook “Spanish style” or do you make your own creations at home? Was it difficult for anyone else to adjust to the Spanish schedule? 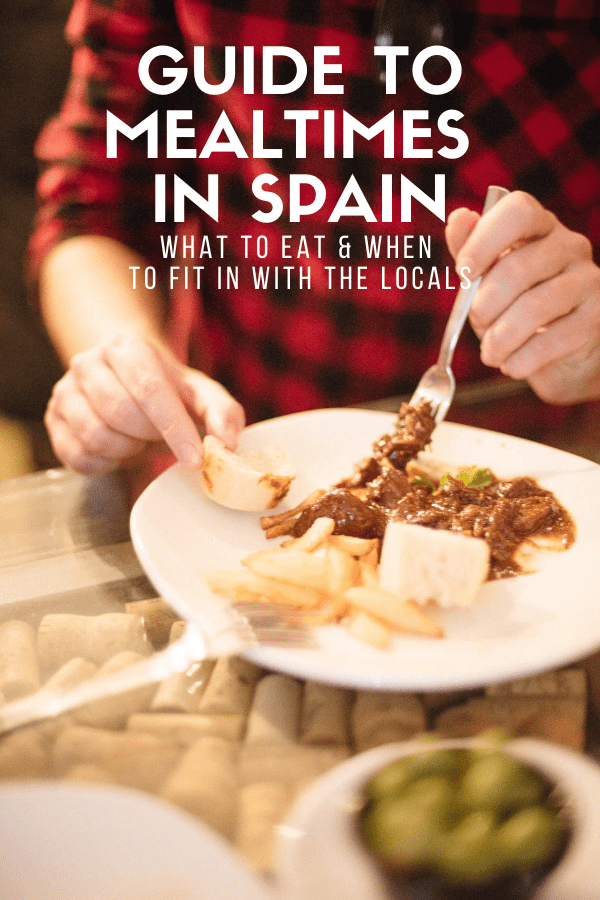